I prefer red wine, some people prefer white, but in Vancouver many men prefer whining about the women here. Would you like cheese with that? “But Vancouver women are different” – really? It’s funny how many times guys will say that – the same guys who have no courage to talk to women. The same guys who stay at home talking about doing it, and never actually do.

It’s easy to blame the Vancouver dating culture and women for your lack of dates, but you’re the one not talking to anybody. Sure, some guys have had a bad experience. Yes, your baboon heart may have even been broken one day. That’s just called life, so deal with it. 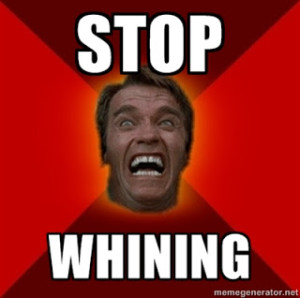 However, for anybody who wants to make things happen, the control is in your hands. You can get fit, dress better and build your social skills by talking to people. We’re human and can grow and change. Nobody else is going to make this happen, it’s all up to you.

Then why the glum faces and whiny voices about Vancouver’s dating scene? The main reason comes down to personal responsibility, and a whole lot of people who don’t want to accept it. Think about that. It’s easier to feel good about yourself for not doing something if you have a scapegoat. If the women here are not approachable, then no problem, don’t approach! Problem solved. Now time for another solo latte with a side of tears.

To make Vancouver a more social place it starts with individuals deciding to become more social. Don’t wait for other people to take the initiative and then complain when it doesn’t happen.

Starting conversations, getting dates and becoming friendlier is as simple as saying good morning to everyone walking by, or making a simple comment to a stranger at a cafe.

Gandhi said, “Be the change that you wish to see in the world.” So why aren’t you being the change you wish to see in Vancouver? All change starts with an individual taking action, such as with the guy who started The Stranger Project where he goes around making a photo documentary about meeting different people on the streets of Vancouver. There’s also Say Hi Vancouver, a once a year event where a lot of people get together with the crazy idea of saying hello to strangers.

For some of us this is a lifestyle and not a once a year event, or something which requires an excuse like doing a photo documentary. At the cafe, grocery store and on the street, individuals with a little social tact and some bravado can get dates and make friends.

So before crying a river about Vancouver’s dating scene, make an honest analysis on what you’re doing or not doing to make it happen.

Instead of whining here is a list of things you can do right now:

Nobody likes a downer.

Actually talk to people instead of complaining that everyone else isn’t social.

Learn how to walk up and introduce your self to a stranger.

4. Chat up a barista

Chat up a barista or anyone serving you at a store. Try a real conversation instead of, “How are you? Anyways give me my stuff so I can leave…”

Don’t walk around staring at the ground. Make eye contact with the people you pass and try a smile every once in a while.

People will be more likely to chat with if you’re positive and make others feel good. Walking around with a frown on your face is a good way to repel a potential date.

If the social scene doesn’t seem great then take responsibility to make it better by being friendlier to everyone.

An ego won’t get a phone number or a kiss. Don’t pretend you’ve ‘got it handled’, Instead work on a solution.

You will feel better, look better, and have more energy for socializing.

A little fashion never hurt anyone. Wear clothes that fit your body and throw away the saggy pants.

Investing in yourself is the best thing you could ever do. Stop wasting money on junk and invest your earnings into making a better version of your self.

Make an effort and work on yourself instead of falling into the “The people here are so cold” fallacy, and you will be surprised how much others will open up.