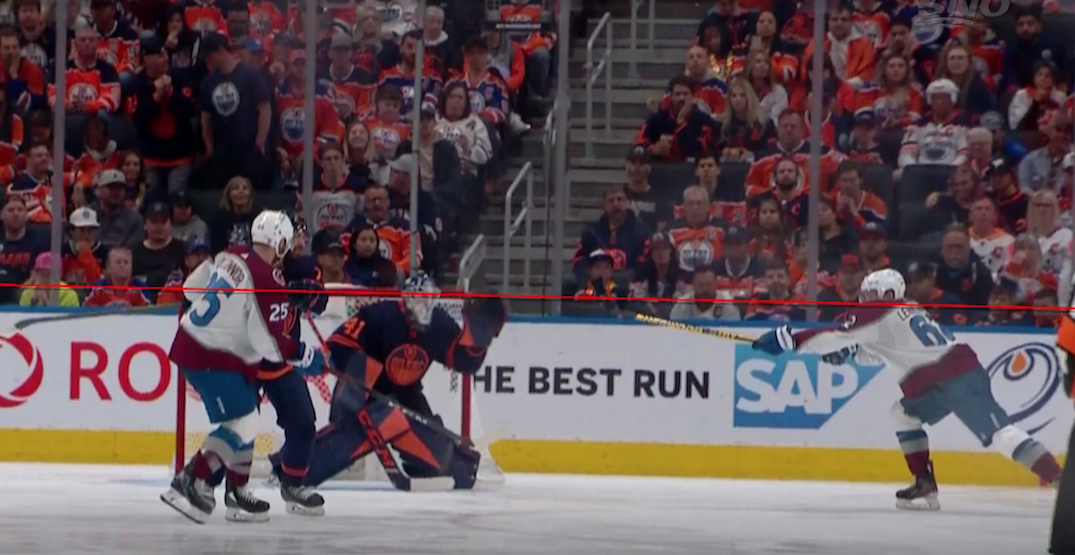 The Edmonton Oilers had a big goal this season — to win the Stanley Cup.

But ultimately, it was a different big goal — one from Colorado’s Arturri Lehkonen that ended up bringing the Oilers’ season to an end.

On the third shift of overtime in Game 4 of the Western Conference Finals, Lehkonen brought the puck down from a blue line shot with a stick that looked to be above his shoulder when it contacted the puck.

Lehkonen then deked the puck past Edmonton’s Mike Smith, sending his teammates into a frenzy by clinching their berth in the Stanley Cup Final with a 4-0 series sweep and a 6-5 win.

The goal initially counted, and then was further confirmed via replay.

Sportsnet’s Elliotte Friedman offered an explanation as to why the goal counted, despite Lehkonen having his stick up in the air.

Lehkonen’s stick contacted the puck with the blade of the stick, just inches below his shoulder. The puck was then directed towards the ice, before he cradled it again and scored. Thus, good goal, by way of the NHL rulebook.

“If the puck doesn’t [directly] The stick has to be below your shoulder, and again, the key here is it’s where [the puck] touches your stick, not where your stick eventually reaches to,” Friedman explained.

In a similar fashion, the NHL put out an official explanation:

The Situation Room determined that Artturi Lehkonen’s stick made contact with the puck at or below the normal height of his shoulders before he scored on his rebound off the goaltender. The decision was made in accordance with Rule 80.

The NHL also added that the replay was initiated automatically by the league’s replay room and determined a good goal.

A gut punch, but by the letter of the law, the correct call. For now, it’s time for a long, long, Oilers offseason, as Colorado waits to see who they’ll be taking on in the Stanley Cup Final.