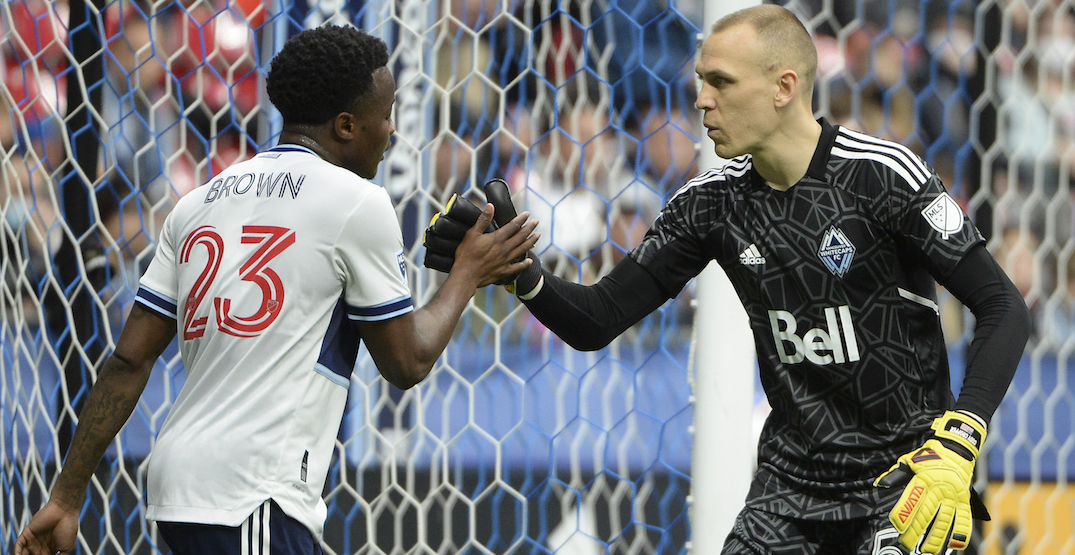 Just when the Vancouver Whitecaps were starting to build some momentum, they’re going to be without their top three goalkeepers as they kick off a stretch of three road games in seven days.

Cropper and Boehmer join fellow goalkeeper Thomas Hasal, who has been sidelined with a dislocated left middle finger suffered earlier this month. Cropper took over in net after coming in for Hasal on May 9. Cropper leads the Whitecaps with two wins this season.

Before flying out to North Carolina, all Whitecaps players, coaches, and staff were tested at the National Soccer Development Centre, on Friday morning and three positives came back.

Following training, and before the team left for the airport, everyone was tested in the afternoon, and Nerwinski was added to the list of players in health and safety protocols.

“We are currently exploring all our options at the keeper position for Sunday’s game,” said Axel Schuster, Whitecaps FC ceo & sporting director.#VWFC

“It is, what it is,” head coach Vanni Sartini explained to reporters following training on Friday. “It’s the world that we live in. First of all we wish Cody, Isaac, and Pedro a speedy recovery. I saw them today, coming here. They were pretty much symptom free, but it is, what it is. Hopefully they’re going to be okay and in a week they’ll be back with the team.”

Prior to being placed in health and safety protocols, Nerwinski spoke to Daily Hive.

“Yeah it’s just kind of been the Whitecaps way,” Nerwinski said. “It’s been a rollercoaster the last two or three years for us. It seems like every time something is good, we get a little knocked down a peg, but it’ll show what our team is about. Even though some bad things happen, we’ll be alright, we’ll manage with what we’ve got.”

As the team went through a final training session before a week on the road, academy goalkeepers Max Anchor and Ben Alexander both trained with the first team.

The 17 year-old Anchor is regarded as the top Whitecaps goalkeeper in the organization after Hasal. The Burnaby native would have to sign a Major League Soccer contract, but that comes with restrictions which could hurt his chances if he decides to play college soccer.

“We have very good goalkeepers in our academy,” Sartini told Daily Hive. “The problem is that some of them are already committed to college. We need to explore the regulations, if the league is going to make an exception with the rules. Today we trained with Ben and Max and at the moment, I’m thinking about Ben and Max, but then we’ll see.”

According to a report from Kristian Jack, the Whitecaps will get help from CPL team York United, who will loan goalkeeper Niko Giantsopoulos to Vancouver.

The Whitecaps are 3-6-2 on the season after completing a four-match homestand with a 3-0-1 record across all competitions. Vancouver is 0-5-0 away from home this season and currently sit tied for last spot in MLS with 11 points.

After playing Charlotte FC and Cavalry FC, Vancouver visits Sporting Kansas City on May 28 before returning home to take on Real Salt Lake on Saturday, June 4.