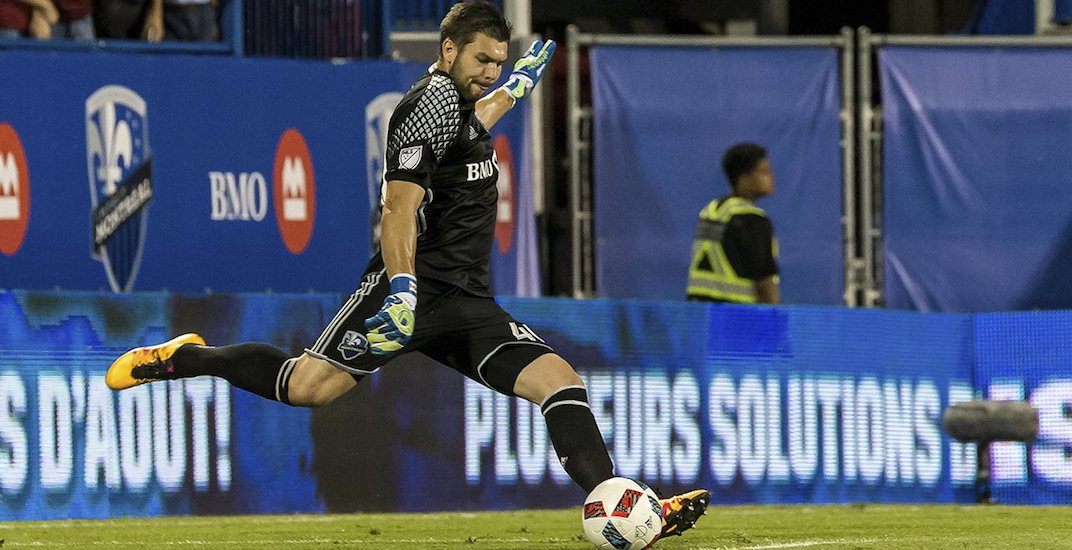 The trade winds are blowing in and Vancouver Whitecaps FC are set to acquire a new goalkeeper from a familiar rival. The MLS transfer window will open on Sunday for a four-hour period, from 9 am to 1 pm PT.

Daily Hive has learned through multiple sources that the Montreal Impact will send goalkeeper Maxime Crépeau to Vancouver in exchange for Targeted Allocation Money (TAM).

Vancouver will be a fresh start for the Canadian keeper.

After growing unhappy and falling out of favour with the Impact, Crépeau spent the 2018 season on loan with the USL’s Ottawa Fury.

The Green Field, Quebec native is expected to challenge for the No.1 goalkeeper spot in Vancouver. Sean Melvin is currently the only goalkeeper the Whitecaps have on its roster.

The 6-foot keeper will be given every opportunity to come in and show that he’s ready to take his game to the next level and become a top MLS goalkeeper.

The Whitecaps decided not to renew the contract of last season’s starter Stefan Marinovic last month.

Crépeau isn’t the only face that’s coming over from the Fury. Newly named Whitecaps FC goalkeeper coach Youssef Dahha spent 2018 with Ottawa as their goalie coach. Prior to that, Dahha was with the Impact from 2004 to 2017.

The Whitecaps also announced the additions of Vanni Sartini and Phillip Dos Santos as assistant coaches.

#WhitecapsFC Coach MDS on new GK Coach Youssef Dahha: "Youseff and I have a lot of history in Montreal. Every keeper he's touched, he's done a great job. He worked only with Max Crepeau last year & helped him become #USL keeper of the year." #MLS #Vancouver

New Whitecaps coach Marc Dos Santos will hope Crépeau can help Vancouver improve on the 67 goals the team allowed in 2018. The Whitecaps earned all of two clean sheets last season.

A product of the Montreal Impact Academy, Crépeau has minimal MLS experience. He made three starts for Montreal during the 2017 season. At 0-3-0, he is still looking for his first MLS victory, which could come as early as March when the 2019 season kicks-off.

If Crépeau can grow, develop, and deliver on the promise Montreal and Ottawa have seen in him, Vancouver could very well have a young goalkeeper of the future, and for a reasonable cost. Crépeau earned $84,083 this past season.

On the international stage, Crépeau has made two appearances with Canada’s senior men’s national team. His only start came during the Benito Floro era on February 5, 2016, in 1-0 loss to USA in an international friendly.