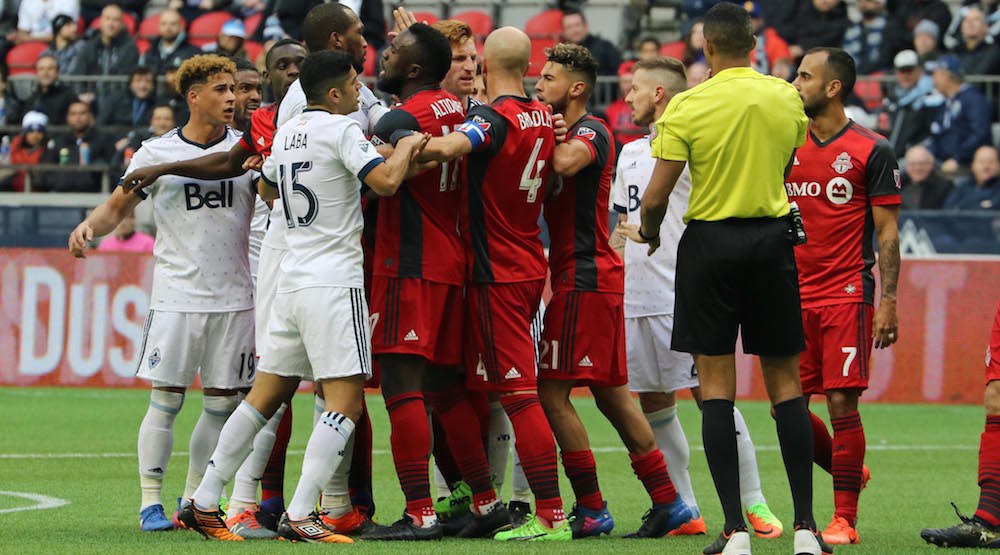 It’s been a tough start to the 2017 MLS season for the Vancouver Whitecaps.

The ‘Caps have yet to win a game this season, and have been reduced to 10 men two weeks in a row.

On paper things looked good for Vancouver, who were facing a winless Toronto FC team who were missing injured superstar Sebastian Giovinco.

The Whitecaps were also shorthanded with goalkeeper David Ousted serving a suspension for his sending off away at San Jose last week.

The first half of the match was uneventful with Vancouver striker Fredy Montero coming close to scoring, but watched his partial block of Alex Bono’s clearance roll harmlessly wide of the Toronto goal.

That was not an entertaining half of football. #vanvtor #VWFC

Robinson clearly felt that the Vancouver attack needed tweaking, and chose to bring on Christian Bolaños for Alphonso Davies at the start of the second half.

Bolaños had an immediate impact setting up Nicolás Mezquida with a clever ball chipped into the Toronto area.

The big turning point in the match point came in the 70th minute when Vancouver’s Brek Shea was sent off.

Shea had kept his nose clean until this point in the match, but was shown a yellow card after he chopped down Toronto’s Nick Hagglund.

To add insult to injury Shea then proceeded to chirp at referee Ismail Elfath, who immediately sent the Vancouver attacker off for dissent.

At this rate, #VWFC should be pros at 10-man football. #VANvTOR

And that’s where things starting going downhill for Vancouver.

Five minutes after Shea took his long walk of shame back to the Whitecaps’ dressing room, Victor Vázquez headed the ball past Vancouver goalkeeper Spencer Richey to open the scoring.

Vazquez with his first MLS goal! It's 1-0 Toronto! #VANvTOR pic.twitter.com/Vt2CfyTspt

Ten minutes from full time Altidore stuck a dagger in the Whitecaps’ hopes of a comeback when he made it 2-0 for the Reds.

“It (Shea’s red card) was a turning point, because the game was pretty even,” Robinson said after the match.

Robbo said Shea told him what he said, apparently something that's said 10 times every match.Robbo said he'd "get to the bottom of it" #VWFC

“Happy, but disappointed,” was how goalkeeper Spencer Richey described his MLS debut.

“Two nights ago I honestly didn’t sleep at all,” Richey told reporters after the match. “Last night I actually slept ok. I was more nervous for the decision more so than for the match itself.”

Saturday’s loss was Vancouver’s second in as many weeks. The Whitecaps have a bye next weekend and have an extra week to prepare for the LA Galaxy on April 1st.