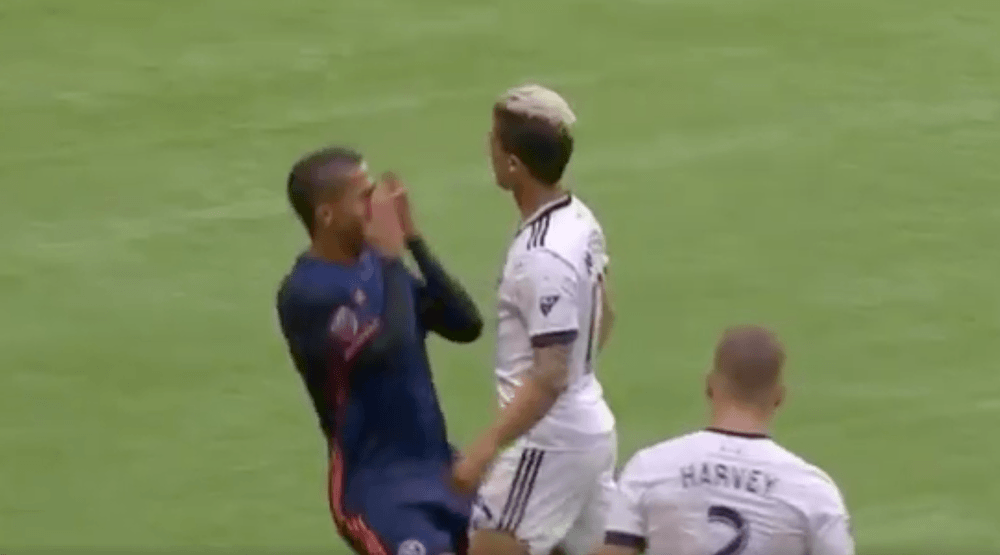 Well, that was embarrassing.

The dive, not the match.

Vancouver Whitecaps FC and New York City FC played the most entertaining match of the season on Wednesday at BC Place.

It had everything. Goals, saves, passion, controversy… and one of the most embarrassing dives you’ve ever seen.

As if flopping wasn’t embarrassing enough, he went down clutching his face as well.

You would call it an Oscar-worthy performance if the acting wasn’t so poor.

Somehow, some way, Montero received a yellow card for this while Herrera – who already had a yellow card – received nothing. He ought to be suspended for trying to cheat New York’s way to victory.

Anyways, back to the match.

If you could get past the dive, it was thoroughly entertaining.

A sellout crowd of 22,120 was on hand on a Wednesday night to see a star-studded NYC FC side that features Andrea Pirlo and David Villa.

But it was the Whitecaps who got on the board first.

Fredy Montero scored in the third minute, before Maxime Chanot levelled the match in the 34th minute. Then, minutes later, some theatrics led to getting a lead for the visitors.

Yes, that’s Thomas McNamara acting like he was clocked by Whitecaps captain Kendall Waston. In reality, he probably felt the wind on his face.

Unfortunately for Vancouver, it led to David Villa scoring on a penalty, giving New York City a 2-1 lead at half time.

It was frustrating for the Whitecaps, who began to lose their cool.

“I said to the players, ‘I want to keep eleven men on the field, reset, refocus, and just get back to basics,’” Whitecaps manager Carl Robinson said. And that’s exactly what they did.

In the second half, the Whitecaps woke up, putting together an offensive barrage that wound up winning them the game.

Managing to keep their emotions in check, they got an important goal from left back Jordan Harvey in the 54th minute.

Then Yordy Reyna, owner of the best hair in Vancouver, made his home debut.

The second-half substitute scored the winner in the 88th minute, after some great work on the build up from midfielder Cristian Techera and rookie right back Jake Nerwinski.

Reyna thundered a header home, then ripped off his shirt, as BC Place was sent into a frenzy.

The win was a huge one for Vancouver, who are back into a playoff spot in the Western Conference with a 7W-7L-3D record.