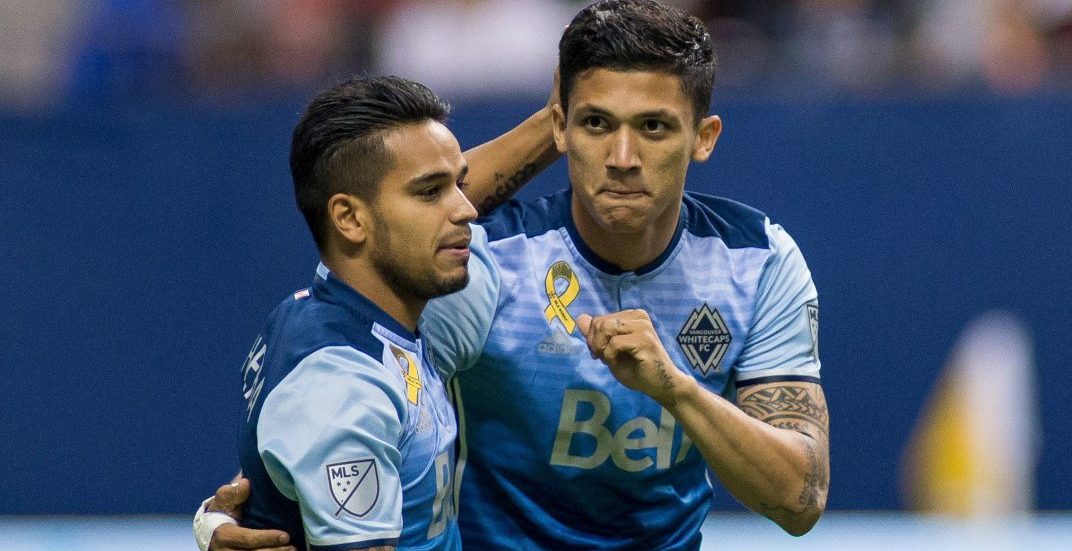 You have to think that Yordy Reyna, the 24-year-old Peruvian playmaking midfielder, won’t be a secret weapon for the Vancouver Whitecaps much longer – assuming he is even still a secret at this point.

His talent is certainly no secret to the Whitecaps faithful, who have been watching Reyna pick apart defences, pick the top corner with diving headers and find teammates with key passes and crosses.

Crosses like, say, this one to striker Fredy Montero, which the Colombian nodded home to open the scoring four minutes into Saturday’s match against the Colorado Rapids:

Reyna has proven he has the talent to be a threat no matter who the opponent is. It’s no wonder the Whitecaps are now on a seven-game unbeaten streak, during which Reyna has four goals – all game-winners – and three assists.

That’s right, seven games – the ‘Caps would go on to win this match 2-1, giving them 10 points of 12 during their four-game homestand and a four-point cushion atop the Major League Soccer Western Conference pending the results of Sunday’s games.

This whole Montero-Reyna thing is beautiful

Chemistry in professional sports is such an unpredictable thing. It’s practically impossible to just look at two players and determine, yes, these people will complement each other nicely. Go do your stuff.

Thank goodness the Whitecaps seems eager to take advantage of the bubbling chemistry between Reyna and Montero. The goals and assists are coming for both of them at the right time of year, when good form and good health are at their utmost importance and chances need to be cashed in whenever possible.

Continuing the “Tim Howard, what are you doing?” sideshow from earlier, indecision from the veteran goalkeeper presents one of those aforementioned chances that need to be cashed in. Enter Yordy Reyna.

In the first half, it’s Reyna with the heads-up play and pinpoint cross for Montero. In the second, it’s Montero with the cheeky stutter-fake long ball for Reyna to run onto.

If Montero and Reyna are the only two names I have to say for the rest of the season, I’m not going to complain one bit.

A word on the supporting pieces

There are nine other players on the pitch for the ‘Caps, though, so we should probably cast our gaze over how they did in this match. Let’s start at the back and work our way out.

David Ousted had a comfortable night in goal, making one big save in the latter stages as Colorado pushed for an equalizer.

Central defenders Andrew Jacobson (filling in for the suspended Kendall Waston) and Tim Parker wavered between average and “uh-oh”, showing a little more bend and some break than we’re used to with the ‘Caps defenders. Parker in particular paid dearly for his lackadaisical attitude just as the first half was winding to a close, allowing Colorado attacker Dominique Badji to tap home the 1-1 goal through David Ousted’s legs.

Meanwhile, it was another solid night for the fullbacks. Jake Nerwinski’s rookie season continues to be a revelation, while Marcel de Jong has me convinced he should be starting over Jordan Harvey come playoffs. De Jong’s hard tackling, killer long-balls and occasional hey-there-he-goes sprints to blow through the midfield make him a massive asset – one that should not be wasted.

In front of the backline, the double-pivot defensive midfield setup of Aly Ghazal and Tony Tchani were rock solid, with both providing ample offense through decent passing to go with hard-nosed, relentless defending. It’s looking more and more like the loss of Matias Laba for the season is all but an afterthought.

Remember when u guys were telling me that de Jong and Tchani were 💩? 🙃 #VWFC #VANvCOL

On either side of Reyna, wingers Brek Shea and Cristian Techera were, um, there, I guess? Neither had what you would call standout performances, with Techera in particular doing more tracking back than attacking and Shea getting oh-so-close to being a credible threat but being let down by his final ball.

It will be interesting to see who from this group rotates out as the games in hand are cashed in by the Whitecaps.

Are there actual pigeons among the supporters’ ranks now?!

We got a pigeon on the field here #VWFC pic.twitter.com/183zchdTKd

Pigeon attempting a corner kick. WHO ARE YA?! #VWFC @whitecapsfc pic.twitter.com/GRcbcGOKdd

This match needs more pigeon and of course another Whitecaps Goal. #VWFC pic.twitter.com/OPS9m6GiFS

I knew Vancouver had won over the crow demographic, but the pigeons, too? This is a landmark moment in human-avian relations, no doubt.

Speaking of things that travel the skies, the Whitecaps will be racking up frequent flyer miles starting next week as they begin a three-game road trip to Seattle, Kansas City, and New York.

Those are not easy matches and could end up deciding the Western Conference champion.