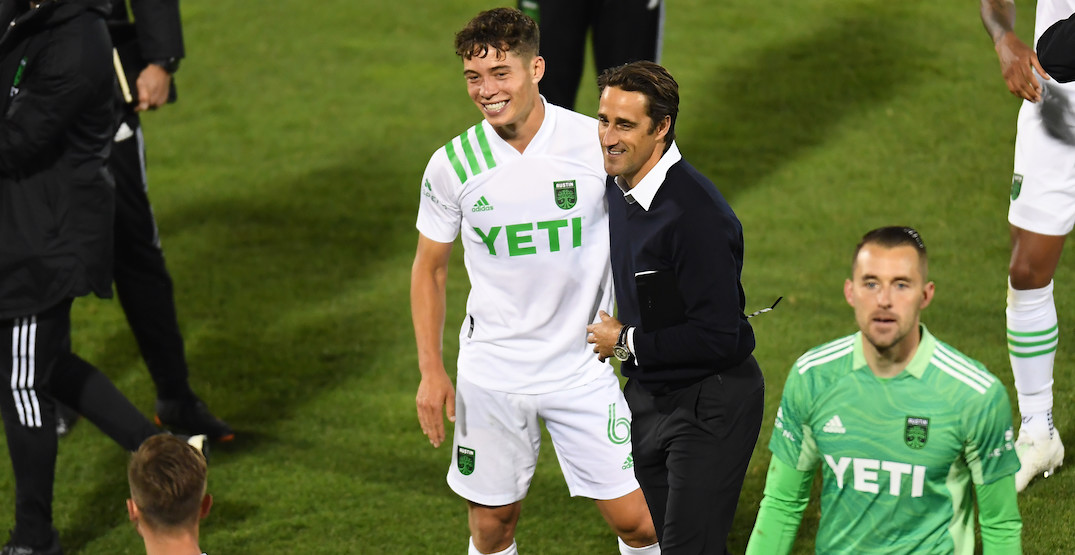 Daily Hive has learned that the Vancouver Whitecaps will be acquiring midfielder Sebastian Berhalter from the Columbus Crew. Vancouver will send $50,000 in General Allocation Money, as well as conditional payments,for the 20-year-old American.

The trade is expected to be officially announced on Friday morning.

The son of US men’s national soccer team head coach Gregg Berhalter, Sebastian spent last season on loan with Austin FC. His purchase option was declined at the end of last season. In two MLS seasons with Columbus and Austin, Berhalter has made 27 appearances, recording one assist.

After loaning out Janio Bikel, Vancouver was in search for some midfield depth. Adding Berhalter strengthens the Whitecaps midfield, which will feature Russell Teibert, Leo Owusu, Michael Baldisimo, Pedro Vite, and Caio Alexandre this season.

The Whitecaps will head down to San Diego, California on Saturday, playing four preseason matches, before returning home on February 16.

The Whitecaps have also locked up leading goal scorer Brian White. The New Jersey native will be celebrating his 26th birthday with a contract extension that has him signed through to the end of the 2025 season, with a club option for 2026.

After joining the Whitecaps from the New York Red Bulls on June 2, White went on to lead Vancouver in goals with 12. White earned a salary of $216,000 last season. His new deal earned him a raise, as well as bonus structure should he continue to reach targets, according to Postmedia’s J.J. Adams.

Looks like #VWFC striker Brian White is going from a little over $200k to around 400, not including incentives which could push it way higher.

Still a hella good deal for the Caps. https://t.co/jb9rUXvVDK

“It feels good to put pen to paper and commit my future here,” White told reporters post training on Thursday. “Since coming to Vancouver, it’s been a match made in heaven. Everyone here has welcomed me with open arms. They’ve helped me take my game to the next level, so I’m just hoping that it continues.”

Whitecaps midfielder Caio Alexandre made 15 appearances for Vancouver last season before he fractured his left foot in training last August.

The 22-year-old is currently training in Brazil, and will meet the team in San Diego.

Daily Hive has learned that a unique visa situation has prevented Caio from working in Canada. When the Whitecaps were in Utah last year, Caio’s work permit was issued for the US. He’s currently awaiting visa documents that will allow him to work in Canada.

“He can come to Canada, but his work permit is not finalized,” Schuster revealed. “He joined the team in Salt Lake and it’s so much easier for Brazlians to get paperwork in the US than in Canada. As a US-based team at that point, it gave him the US paperwork. Then he was injured and we started the process in the beginning of October last year to get him a Canadian work permit and almost four months later, it’s still not done.”

Thomas Hasal will be the Whitecaps’ No. 1 goalkeeper heading into the 2022 season. As the club continues to shop for a backup keeper, they have confidence in the 22-year-old, who has appeared in 16 games over the past two seasons.

Vancouver will be signing Isaac Boehmer to an MLS contract. After having his contract declined at the end of last season, Boehmer spent the first three weeks of camp on trial.

“We have two goalkeepers on an MLS contract,” Schuster revealed. “We are signing Isaac back to an MLS contract… The paperwork is just done, I think. It’s not a big secret that Isaac will slide back into the third spot.”

The Whitecaps aren’t done shopping for keepers, Schuster has confirmed that the club will definitely be adding a goalkeeper that’s counted as a domestic player. The club won’t be using an international roster spot for that position.

“We want to have somebody that’s more ready to play in MLS,” Schuster explained. “Somebody with more experience, with goalies it’s a little bit different. They’re special and they don’t need a lot of time to adjust and come into a team. It will happen before the season starts, but it might not happen before San Diego ends.”

Whitecaps head coach Vanni Sartini returned to training on Thursday for the first time since being placed in COVID protocols on January 28. He was spotted on the touchline with a mask on and was quieter than usual, allowing his assistants to run training.

Lucas Cavallini and Cristian Gutierrez both missed Canada’s 2-0 win over El Salvador on Wednesday. Neither player made the trip to Central America after being placed in COVID protocols. Cavallini will return to Vancouver and travel with the team to San Diego, while Gutierrez remains in Ontario and will travel to California once he clears protocols.

The Whitecaps are tested once a week and will undergo COVID testing again on Friday morning.

MLS veteran free agent Tosaint Rickets remains on trial with the Whitecaps, and a decision on whether Vancouver will re-sign Ricketts to a player contract remains unknown. The club will use all four preseason matches to evaluate roster options before making a decision.

The 34-year-old is expected to move to a front office role.

“We want to wait until the end of the San Diego camp,” Schuster explained. “He’ll play there. It’ll take us two more weeks to make the final decision on that. He has already signed a contract with the club behind the scenes. Regardless, he will stay here. It’s now a question of how much is he still a player, and how much he’ll be behind the scenes.”