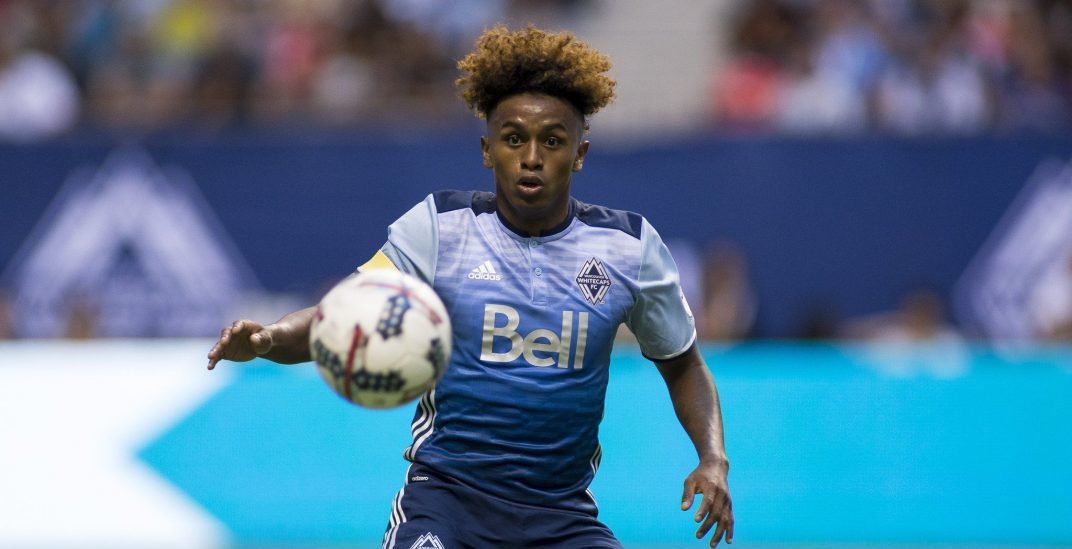 Having spent the international break mostly relaxing and recuperating, the Vancouver Whitecaps returned to Major League Soccer action with supporters asking one question: could the ‘Caps keep their solid form going against visiting Real Salt Lake?

In a few more words, why hello there, Yordy Reyna. What’s that? You’d like to grace us with another goal courtesy of your Sideshow Bob-like locks in emphatic fashion? And it’s the winning goal, too? Well, all right, then.

Beautiful. Let’s break that down, shall we?

First, the Turf Monster™ munches on winger Joao Plata, giving fullback Jake Nerwinski an opening to do what he’s been doing a lot of in his rookie season: go rampaging down the right side with aplomb.

Nerwinski then picks out Bernie Ibini, making a rare start and looking good doing so, in a very dangerous position in the attacking area. Ibini promptly fires a bullet cross – seriously, look at the mustard he puts on that delivery – which Reyna is only too happy to put into the back of the net.

That would make the score 3-1 in favour of the ‘Caps, though RSL’s veteran fullback Tony Beltran would score his first-ever MLS goal after 240 regular season appearances to make things interesting and leave the final score at 3-2.

The big man, the “Towering Tico” – whatever you want to call him, Kendall Waston is having a dynamite season.

Giving the historically temperamental and foul-happy defender the captain’s armband – a decision that seemed questionable at the time yet brilliant now – has led to Waston delivering top-tier performances for both his club and country.

In fact, despite playing two matches with Costa Rica in World Cup qualifying (including a 2-0 win over the United States in New Jersey), Waston was still front and centre for the RSL match in BC Place and even came through with a goal.

It’s not hard to imagine how a calm, confident Waston who is clearing out opposing crosses while burying friendly ones could carry the Whitecaps into and during the playoffs.

Just think back to what Aurélien Collin did for Sporting Kansas City during their victorious MLS Cup run in 2013. Or Omar Gonzlez with the LA Galaxy in 2014. Or the Portland Timbers’ Nat Borchers in 2015. Or Chad Marshall for the Seattle Sounders last year.

"I even surprised myself…" 😏

There’s a trend, is what I’m saying. Waston is in line to continue that trend should his (and the Whitecaps’) form continue like it is.

…but he should. If he makes the shortlist, I’ll be pleasantly surprised. Even that seems like a tall ask, considering Nerwinski plays 1) in the Western Conference, and 2) in Vancouver.

(Lest you think that’s me trotting out an “east coast bias” trope, recall what happened during the 2015 MLS award season. Spoiler: David Ousted didn’t win Goalkeeper of the Year.)

It’s a true shame. Nerwinski is another example of the ‘Caps drafting well when it comes to defenders and is, for my money, the outright starter at right fullback over veteran Sheanon Williams. Nerwinski had two assists on the night, both richly deserved and further examples of his rampaging attacking prowess.

However, he’s not in the east, so, somebody not named Nerwinski is probably walking away with Rookie of the Year.

Elliott, Danladi, Gressel & Nerwinski are probably the top 4. My guess is Gressel wins b/c of his counting stats

Ghazal had been on the bench at Chinese Super League club Guizhou Hengfeng Zhicheng FC since January, owing to changes in the league’s international player policy – the same changes that led to Fredy Montero joining the Whitecaps on loan.

(Side note: thanks, China! We’ll be sure to send a card after the season’s over.)

Ghazal’s fitness was in question, with many wondering if he might see minutes off the bench or perhaps a halftime substitution during the upcoming stretch of games. Instead, Robbo not only started Ghazal, he left him on for the full 90 minutes(!) to run the show from the defensive midfield spot usually occupied by Matias Laba.

It turned out to be a genius move. Ghazal looked assured, confident and rarely put so much as a toe out of place during the night’s proceedings.

That said, it’s unlikely Ghazal will be used in Wednesday’s match against visiting Minnesota United, unless Ghazal has secretly been doing cardio for the last eight months and has the stamina of a draft horse. I doubt it, though.

After Minnesota on Wednesday, the Columbus Crew make the journey to BC Place next Saturday, so perhaps we’ll gaze on Ghazal then.

Oh, boy. Don't look but the #VWFC have the best points per game average in the Western Conference and 4th best in #MLS #WhitecapsFC