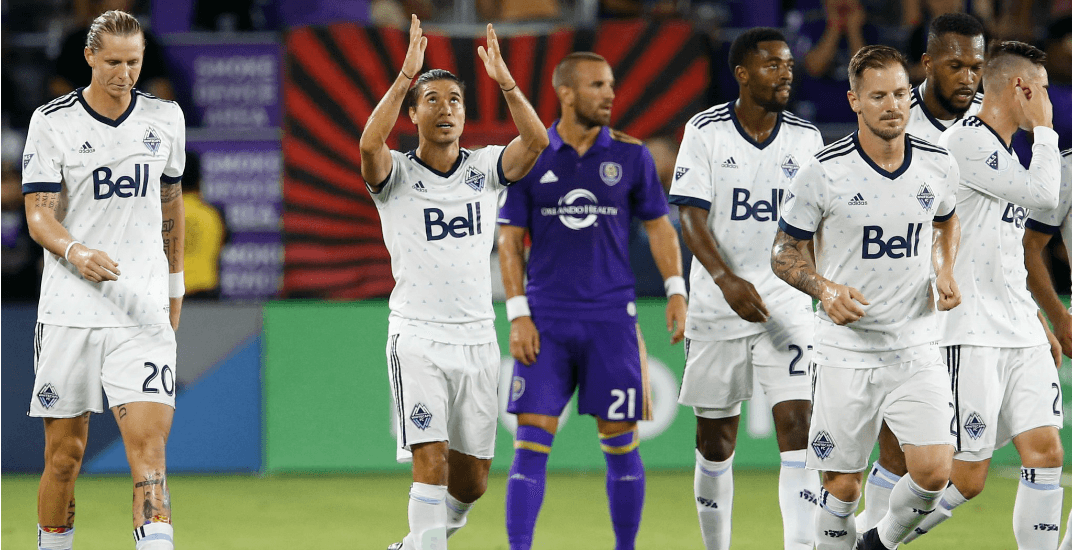 The Vancouver Whitecaps’ visit to Florida to battle Orlando City SC on Saturday had everything – an own goal, end-to-end action, quality finishes, incredible saves, and sweat. Lots and lots of sweat.

The ‘Caps earned three valuable points on the road, emerging victorious by a score of 2-1.

The Upper Cascadia boys were aided in their quest to victory by Tommy Redding, the Orlando City centre back who flicked a cross served by Nicolas Mezquida into his own net at the eighth minute of the game.

The gaffe gave Vancouver the start they needed, and turned out to be the difference in the match.

All of a sudden the Whitecaps are hanging with the top teams in the West #VWFC pic.twitter.com/woWfX1zK9V

It was a busy week for Carl Robinson’s troops who played three games in an eight-day span, including two home games (against their high-flying conference foes, Houston Dynamo and Western leaders Seattle Sounders) and a transcontinental trip to Orlando.

At the end of the week, the Blue and White collected seven out of nine possible points. Not a bad harvest for a challenging week in the MLS schedule.

If there was a course that teaches how to win on the road in Major League Soccer, tonight’s match should be included in the curriculum.

Carl Robinson’s team produced a professional away performance with a game plan that was executed to perfection.

A goal from a set piece, a deadly counterattack that was crowned by an exceptional finish from Brek Shea, organized defensive solidity, and a dash of luck turned out to be the perfection concoction to conjure a Whitecaps win.

.@BrekShea chips in for the ‘Caps!

The Thunders from Down Under

After playing with his regular starting 11 at home, the Welsh Tactician sent a rotated squad to face the Floridan Lions. Robinson applied nine changes to his troops, including several players who were hungry for minutes and ready to prove to their coach and their supporters that they are ready to take on meaningful minutes going forward. Only defenders Kendall Waston and Jordan Harvey maintained their positions.

A couple of standouts from the night were the newest Whitecaps from Oceania.

New Zealand goalkeeper Stefan Marinović had an impressive performance. The Auckland native was solid between the sticks. He pulled off a couple of brave and unlikely saves that ensured his team got the full three points.

With David Ousted’s future in Vancouver uncertain at best, the Kiwi keeper is raising his hand and proving that he may be a worthy heir to the Great Dane.

Bernie Ibini was another high performer on the night. The powerful Australian winger demonstrated a remarkable work rate, excellent ball distribution, and lighting speed on the flanks.

Do not be surprised if the Sydney native starts to feature more often in the Whitecaps lineup.

There was plenty of chatter around Carl Robinson’s starting 11 on the ol’ Twitter machine prior to the game.

The starting XI on the pitch tonight 👏
Go on boys! #ORLvVAN | #VWFC pic.twitter.com/KvSfip0Asg

This kind of personnel juggling would require a formation shift to something other than Robbo’s favoured 4-2-3-1. At first glance, you could maybe fashion a 4-1-4-1 with Russell Teibert as the lone defensive midfielder and Erik Hurtado leading the charge up front.

Of course, if you thought that, you were wrong. Robbo stuck with the 4-2-3-1 and plopped Canadian international fullback/wingback/occasional winger Marcel de Jong smack into the midfield as part of a double-pivot alongside Teibert.

On the one hand, yay, more Canadian content! On the other, isn’t Marcel de Jong an outside-type player? Have the ‘Caps gone into full desperation mode in the name of preserving a favoured formation while committing to squad rotation?

The panicking would be for naught though, as De Jong absolutely crushed it as a d-mid. It turns out De Jong runs the midfield with a similar unyielding, terrier-like commitment to chase down attackers as Teibert.

More often than not, Orlando were forced to attack from the flanks (I’m sure they’d say they were going after rookie defender Jake Nerwinski as part of their plan) to cross balls in, where a waiting Kendall Waston has apparently not made it 100% clear to the league that crosses into the box are his bread and butter.

While I’m not sure I’d like to see De Jong there ahead of Tchani (when available), the Canadian has suddenly opened the door to being an option ahead of Jacobson – a prospect that further raises questions about Jacobson’s life expectancy with this team, especially considering Egyptian international Aly Ghazal is inching ever closer to being game-ready.

The Whitecaps are now off for a couple of weeks and will return to action on September 9th as the Blue and White set out for a four game stint next month.