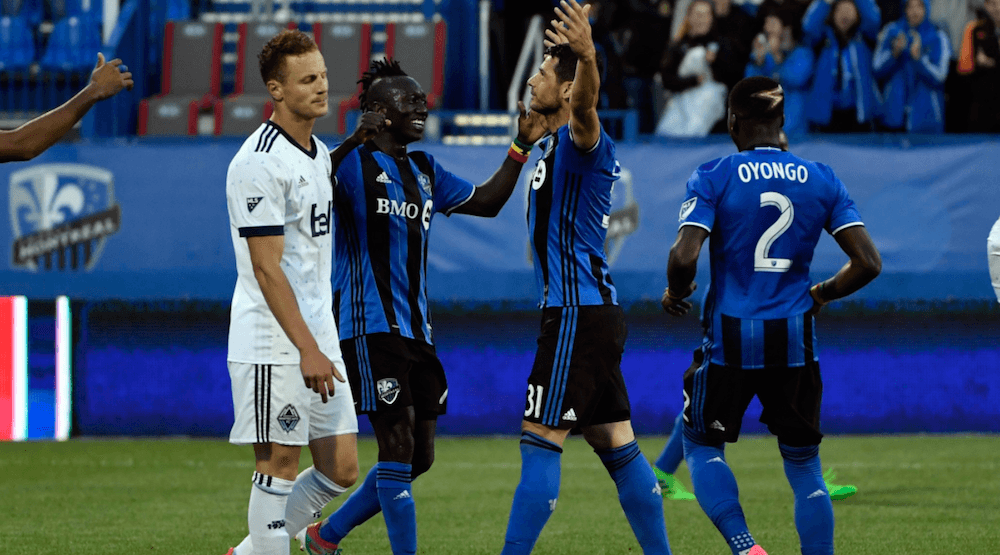 A valiant comeback effort was not enough for the Vancouver Whitecaps who fell 4-2 at Stade Saputo and 5-4 in aggregate score, eliminating the ‘Caps from the Amway Canadian Championship on Tuesday night.

Penalties continue to be the main storyline of the week for the Whitecaps, who surrendered two shots from the spot at the 20th and the 28th minute, both of which were converted by Ignacio Piatti.

Things went from bad to worse when Montreal midfielder Blerim Dzemaili put the Impact ahead by three goals 10 minutes later.

An Alphonso Davies goal in the second half was quickly answered two minutes later by Montreal’s Anthony Jackson-Hamel.

I dunno, #VWFC Twitter. It feels like this game should be 2-1, not 4-1. Those PKs, while deserved, really could've been avoided.

Kyle Greig scored in the 77th minute to make things interesting, but in the end a young Whitecaps squad was no match for the veteran-laden lineup put forth by Montreal.

Carl Robinson, on the other hand, applied a different approach to the match and stuck with a lineup featuring a combination of squad players and Whitecaps FC 2 call-ups. The strategy almost paid off as former WFC2 Kyle Greig reignited the hope for a comeback at the 77th minute when he headed in a cross from Cristian Techera.

Through the last 15 minutes of the match, the Blue and White pushed for the third goal they needed to punch their ticket to the final, but it was not to be. While they created several chances, they were unable to convert them and the dream of lifting the Voyageurs Cup was officially over.

While the Welsh Tactician will face criticism for not fielding his best eleven with a crucial match on the line, his willingness to give opportunities to young players is to be commended.

Carl Robinson sent Alphonso Davies to the pitch at half-time in an effort to jumpstart his team and get back into the game. The youngster immediately repaid his coach’s trust by giving his team the spark they needed in the final third.

Throughout the second half, Davies had many dangerous incursions into Montreal’s territory on the right side of the pitch. The 16 year old also dropped further down the pitch to pick up the ball at midfield and drive the ball up-field with piercing diagonal runs towards the Impact’s box.

Davies hard work was rewarded at the 59th minute when he put his team on the board via an impressive half turn volley off a ball from Jake Nerwinski on the right hand side.

Just as the ‘Caps saw a glimmer of hope after the Davies goal, Montreal reestablished the two-goal lead they needed to get to the Final. The Blue and White were unable to clear a ball inside their own box two minutes later and Anthony Jackson-Hamel made them pay.

This is only the second time that the ‘Caps have not qualified for the Canadian Championship Final since 2009.

Without commitments in the calendar for the CONCACAF Champions League and Canadian Championship, Carl Robinson and his team can now focus 100% of their attention on the MLS schedule where they currently sit in seventh spot of the Western Conference standings.

Whitecaps get a big boost to their MLS chances by losing to Montreal in the semi-finals of the Canadian Championship pic.twitter.com/Fg1WZcQ6aI

The Whitecaps will resume their MLS campaign this Saturday as they play host to Atlanta United.