All season long, we’ve been asking if this will be “the year.”

Well, we’re about to find out.

On Wednesday night at BC Place, Vancouver Whitecaps FC host Montreal Impact in the final leg of the Amway Canadian Championship Final with their first-ever Voyageurs Cup firmly in sight.

“It’s not about how much money you earn throughout your career; it’s about trophies,” Carl Robinson said this week. “It’s important for the club. Very important. And the players are aware of that. They’ll do their very best and give their all like they always do. And if it’s our day, it’s our day. If it’s not our day, [Montreal will have to] earn it because they’re in our house.”

The ‘Caps are in the driver’s seat after picking up a pair of road goals in the first leg – a 2-2 draw in Montreal back on August 12. That means they would emerge victorious with a 0-0 or 1-1 draw.

Don’t tell that to Robinson, though.

“The first leg is over,” he said. “It’s one game of football. We need to win the game.”

In addition to lifting the Voyageurs Cup, the Canadian champion will qualify for the 2016-17 CONCACAF Champions League. 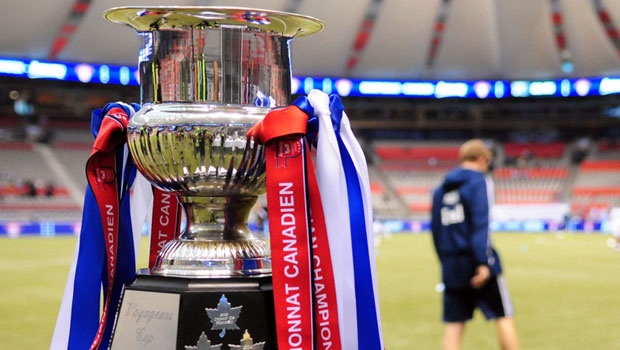 The ‘Caps have never won the Voyageurs Cup, which isn’t lost on the players.

“It’s our time,” said Pa-Modou Kah, who is in contention for Wednesday’s match according to Robinson. “We want to make history. I feel it’s about time that we win it. With the group we have, we’re not waiting for another year or two. No, we want to win it right now.”

“It’s probably our biggest game since I’ve been here,” added Kekuta Manneh, who has two goals and three assists in his last four matches.

Whitecaps FC advanced to the Amway Canadian Championship Final by defeating FC Edmonton 3-2 on aggregate back in May. In league play, the second-place ‘Caps are coming off a 1-0 win over FC Dallas.

The Impact are gunning for their third straight Voyageurs Cup.

After last year’s Canadian Championship triumph, the Eastern Canadian outfit went on a remarkable run to the 2014-15 CONCACAF Champions League Final before falling to Mexican powerhouse Club America. That defeat is likely still fresh in their minds, which should serve as extra motivation for Frank Klopas’ side.

It appears as though Klopas may be without some firepower at his disposal, however. The Impact manager initially said that Didier Drogba would play on Wednesday, but recent reports suggest the longtime Chelsea striker is out with a toe injury and that he and Ignacio Piatti didn’t travel.

“It doesn’t matter who’s on the other side,” Kah said. “Drogba or no Drogba. For us, it’s about the game and making history.”

This is the second time Vancouver and Montreal will play for the Voyageurs Cup since both teams joined MLS. In 2013, Montreal hoisted the trophy at BC Place by virtue of the away goals rule – something Robinson remembers all too well.