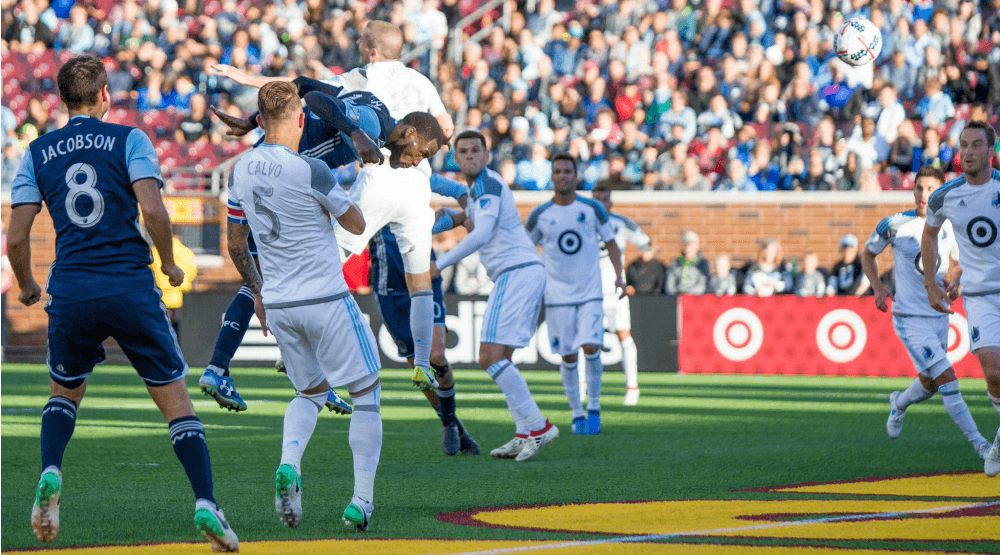 The Vancouver Whitecaps relinquished a two-goal first half lead and finished the day with a 2-2 draw on Saturday afternoon as they traveled to Minnesota to face expansion club Minnesota United for the first time in Major League Soccer.

It looked like an away victory was in the cards for Carl Robinson’s team when they went to halftime with a 2-0 lead. Their first goal came from Cristian Techera who buried a penalty kick at the 15th minute.

Tony Tchani followed that with a powerful header into the back of the net at the 46th minute.

The Loons responded early in in the second half, scoring at the 50th through Francisco Calvo and putting the Whitecaps on the back foot. Just over 10 minutes later, Jerome Thiesson levelled the scoreboard.

The Loons ain’t too bad

Remember the days when Minnesota United was absolutely terrible? The days when they gave up 18 goals in the first four games of the season and were pegged to surely be the WORST expansion team in MLS history?

Yeah, those days are over. While the Loons are not a fantastic team, Adrian Heath and his coaching staff have certainly started to turn things around. Minnesota are better defensively, their attacking pieces are gelling better, and positive results have started to trickle in.

Minnesota arrived to this match three points behind the Whitecaps and they had a golden opportunity to continue climbing the West Conference standings with a victory, it was not to be.

They may not be good, but at least the Loons are not as bad as the Colorado Rapids anymore.

Brek Shea has been a controversial figure since his arrival to Vancouver. The attacker with long, flowing blonde hair has divided opinions among the Blue and White faithful. But, the Texas native has slowly started to change the public’s opinion with goals, good football, and solid complete performances.

Today, the new father had the presence of mind to intercept a backpass destined to Minnesota United’s goalkeeper Bobby Shuttleworth and earn a penalty that opened the scoring in favour of the Whitecaps.

Perhaps more importantly, Shea has demonstrated unwavering industry on the pitch for the Blue and White. You can often see Shea chasing balls that seem hopelessly too long, sprinting to put pressure on the opposing backline, tracking all the way to his own end line with a winger, or clearing the ball in his own small box to protect his net.

Brek Shea has done a really good job tracking back and doing his defensive duties as well. Huge help for the team. #MINvVAN

Not to mention, his bravery and willingness to risk his body for the good of the team. You may or may not like Shea as a Whitecap but he has earned the appreciation for his industry on the pitch.

When Vancouver signed Australian attacher Bernie Ibini at the beginning of May, lots of us scratched our heads and ran to Google to learn a little bit more about the new Whitecap.

Fans had to wait weeks to take a first look at Ibini on the pitch as he recuperated from injury. When he finally made his debut last weekend against FC Dallas, his limited minutes made it difficult to get a good feeling about what we would be bringing to the table.

This weekend, Carl Robinson inserted the Nigerian-born player with 20 minutes to go. With that amount of time, we got a good first glimpse of Ibini and early impressions are positive.

Ibini was able to get involved in the game. Not only did he use his physicality to hold the ball, but he also demonstrated a fair sense of positioning. More spectacularly, he almost provided the Whitecaps with a game-winning goal after he climbed the ladder and put in a low header off of a Jordan Harvey cross and pushed Shuttleworth to make a ridiculous save.

All in all, a decent debut for Ibini and I look forward to seeing what he can do.

At the end of the day, the Whitecaps have to be disappointed about relinquishing a two goal lead on the road that would have helped them leapfrog the LA Galaxy and firmly position themselves in fifth spot in the Western Conference.

Next up is a visit to Chicago where the ‘Caps will face the Fire on Canada Day.