From the lowest of lows to the highest of highs, the Vancouver Whitecaps will be looking to banish the memories of their two-game losing streak to the dustbin of history this weekend. With a depleted LA Galaxy coming to town to face not just a hot team but a lower bowl packed with more than 27,000 screaming fans, is a third win in a row in the offing for the Blue and White?

Injury News (really, for once)

For once, it looks like a sudden bout of “turfitis” won’t be keeping a team’s big stars from visiting BC Place.

This time, the players in question are actually, really, legitimately injured. Two of the Galaxy’s “big three” Designated Players (DPs) — forward Robbie Keane and midfielder Steven Gerrard — are coming off of knee surgery and a left calf injury, respectively.

If you’ve been following the Vancouver Whitecaps for any length of time, you’re likely aware of the trend of top-tier players suddenly being sick, injured or otherwise mysteriously unavailable when it comes time for a road trip to our corner of the world. Apparently, there is no sleight more galling to a soccer player than being forced to place their cleats upon blasphemous artificial turf, such as the one tainting the grounds of BC Place.

We’ll just ignore for now the part where the FIFA Women’s World Cup seemed to play out just fine on the BC Place turf – a turf, I’ll remind you, that was upgraded specifically for that tournament. But I digress. 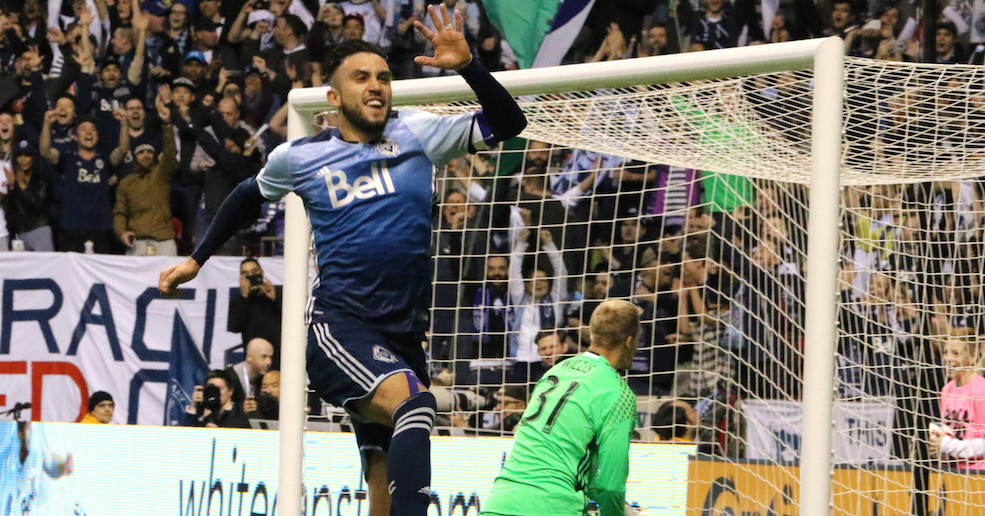 For the home team, Vancouver’s game plan is simple: score a goal from the run of play. It doesn’t have to be a masterwork of tiki-taka or a superhuman individual effort (though I’d be stoked for either), just so long as it’s a goal from somewhere other than the corner flag, the penalty spot or the site of a foul.

I know a lack of production from set pieces has long been a point of concern for Whitecaps supporters. Now we’ve gone out the other side into overreliance, which isn’t so much a fix as it is further consternation. The time to find balance is now. If someone has a copy of “Zen and the Art of Goal-Scoring” lying around, it probably couldn’t hurt to drop it off at BC Place so Pedro Morales and the gang can study it before kickoff.

With the defence finally coming together after a rough start to the season, Vancouver shouldn’t have an issue defending their home turf. Kendall Waston and Tim Parker are back from international duty and are the presumptive starters, which should make ‘Caps fans feel at ease about keeping LA’s diminished attack in check.

So, goal-scoring it is, then. Do it and all is right and well with the world. (Top-tier analysis right here, folks. Goals = good.)

This, quite frankly, is Vancouver’s game to lose – turfitis be damned. 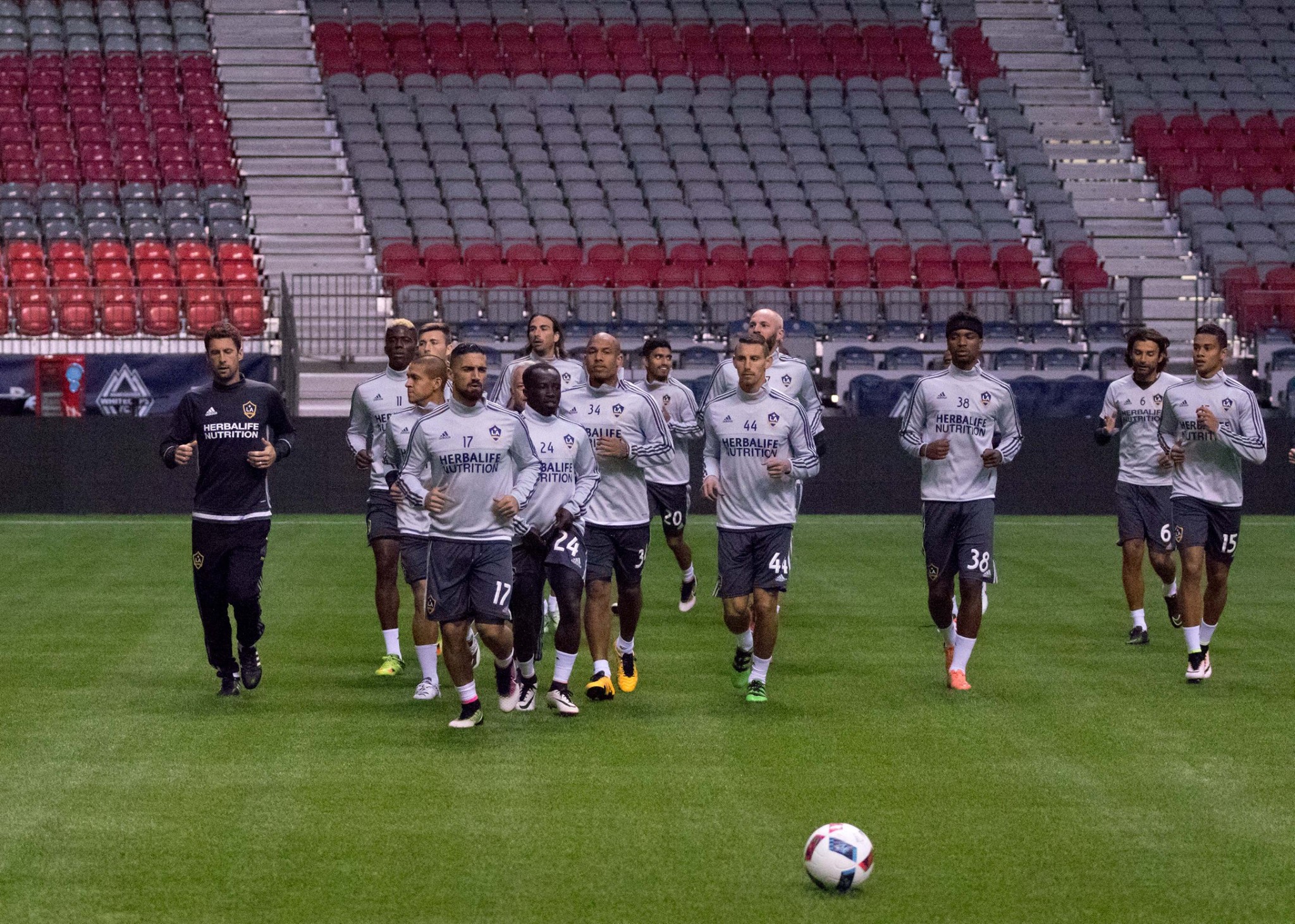 So, without Keane and Gerrard, who does LA Galaxy head coach Bruce Arena send out to face our mighty Whitecaps?

Giovani dos Santos is a question mark as he only just returned to training after an injury of his own. It is conceivable that LA could play this match with zero(!) DPs on the field. Madness!

Gyasi Zardes, on the other hand, is a lock to start. The LA academy product and California native saw action in recent FIFA World Cup qualifying, helping the USA defeat Guatemala 4-0 on Tuesday. He’ll likely slot into LA’s midfield as a winger, though he can play forward if needed.

If not Zardes, former goal machine and MLS MVP Mike Magee is the likely replacement for Keane. Magee has never hit the lofty heights of his 2013 season with the Chicago Fire since coming back from injury. Now back with LA, Magee looks rejuvenated as he’s started the season with two goals and two assists in three appearances. Shutting down Magee will be a big key to a Vancouver victory.

Regardless of who they send out, the fear of Arena’s teams that once permeated the Vancouver locker room has all but dissipated thanks to stellar defensive performances.

Winger-turned-defensive-midfielder Russell Teibert’s efforts in shutting down Keane in particular continue to bounce around the memories of the Whitecaps faithful, not to mention last season’s famous 1-0 road win that snapped LA’s 29-game home unbeaten streak.

That’s not to say beating the Galaxy is a cakewalk.

When it comes to Major League Soccer coaches, Arena is one of those guys you simply do not, ever, under any circumstance, underestimate. Even having lost star defender Omar Gonzalez and midfield linchpin Juninho in the offseason, Arena has replaced them with seasoned veterans in Nigel de Jong, Jelle Van Damme, and Ashley Cole.

The result: a 2W-1L-0D start to the season, good for 3rd place in the ruthless Western Conference. So much for my plan to spend 2016 bashing Ashley “I’ll play in MLS when I want to retire on a beach” Cole into the ground.

This whole game will hinge on whichever team can find their goalscoring boots first. Both the Whitecaps and Galaxy have the capacity to lock down a game once they have a lead, as evidenced recently by a makeshift Vancouver defence holding onto a 1-0 last week over the Houston Dynamo.

Will the second-string LA attack strike first and strangle the life out of the game, or will Vancouver’s forwards finally get that all-important run-of-play goal and let the floodgates open? My money’s on the ‘Caps.