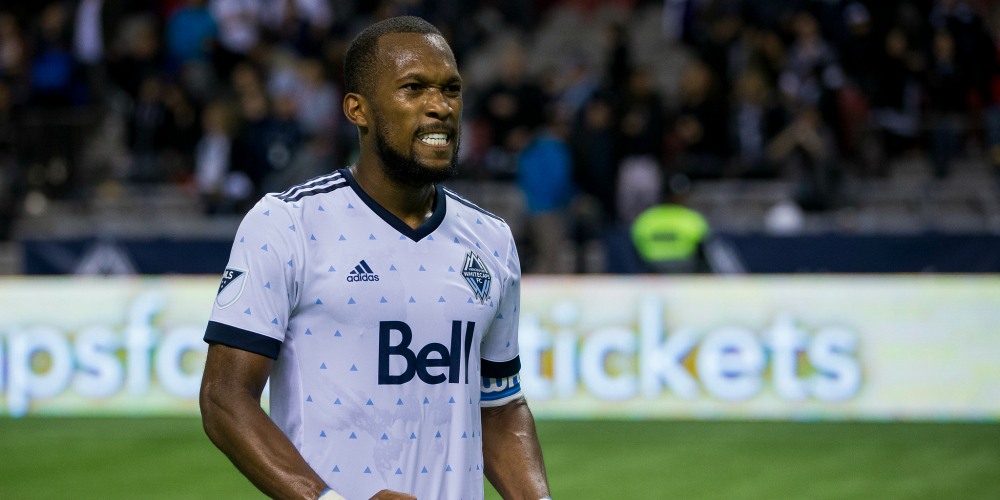 After a miserable 2016 season, the Kendall Waston that Whitecaps fans grew to love in 2015, is back this year.

Something was broken with Waston’s play last season, which was characterized by undisciplined play, red cards, and suspensions.

Size and strength are two of the biggest assets for the 6-foot-5 Costa Rican centre back. But in 2016, these ‘assets’ played against him instead of to giving him an edge. Referees in MLS targeted the hulking Costa Rican and plays that would have been tagged as fair play for someone smaller were immediately deemed a foul when the culprit was Waston.

“I think last year was a tough season for Kendall because I think he got sent off one or two or three or four or five, I don’t know how many times, too many times,” Whitecaps FC head coach Carl Robinson said in a recent press conference. “I addressed that with him in the offseason, for nonsense, for silly little things.”

Waston’s decision-making deteriorated as last season wore on, and his aggression – a powerful tool in any defender’s toolkit – got out of control and became a liability for he and his team.

As the suspensions and calls against him grew, Waston’s play started to decline. Poor positioning, bad decision making, and dubitative defending became the norm. The Towering Tico became a ghost of his former self.

Despite appearing in only 10 games at the back-end of the 2014 campaign, Waston was able to score twice. One of those goals, in the last game of the regular season against the Colorado Rapids, propelled the Whitecaps into the playoffs.

Waston still remembers that goal as one of his favourites in his career.

In 2015, he partnered with veteran defender Pa-Modou Kah through the first half of the season and rookie Tim Parker through the back end of the campaign. Waston became a bastion of what ended up being the best defensive team in the league that year.

Physical dominance, shrewd reading of the game, excellent positioning, controlled aggression, and supremacy in the air were the staples of Waston in 2015 – a year that saw the Costa Rican being nominated for MLS Defender of the Year, only to lose to Belgian international, Laurent Ciman.

It is those same qualities that brought Waston so much success 2015 that we are seeing once again (thankfully) so far in the early goings of the 2017 MLS campaign. The reasons for his resurgence, are plentiful.

He’s a year older, he has become a regular call-up for the Costa Rican national team, the personnel playing around him have also elevated their playing form, and, perhaps more importantly, his coach donned him with the captain’s armband.

“When you are the captain of the team it is important you play with a calm mind and have a control about you.” Robinson explained. “I toyed with the idea in pre-season, who to make captain and Kendall was one of four or five that I decided to look at. I thought he had a little bit more maturity about him so I gave him the armband.”

In speaking with Waston, he mentions that being the captain of this team is a responsibility that he gladly welcomes and will not take lightly. The armband has helped focus his mind and his game has improved as a result. Even the supporters from rival teams have noticed.

“He’s playing well. Maybe he will be the captain from now on,” Robinson reflects.

Whether it is the armband or not, if the Blue and White aspire to qualify to the playoffs, they need Waston to return and retain his high standards on the pitch.