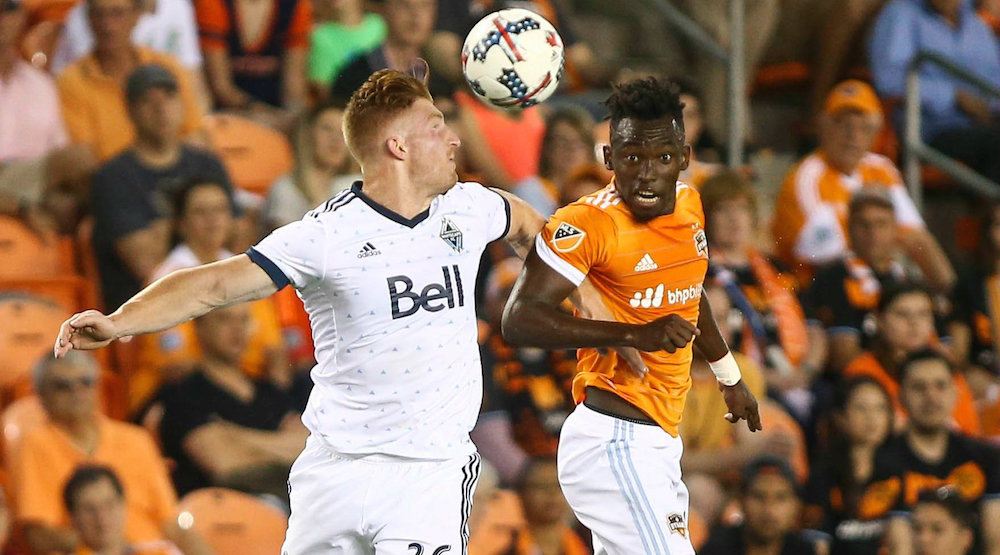 The Power of the Force was not strong with the Vancouver Whitecaps on Friday as they lost by a score of 2-1 on Star Wars night at BBVA Compass Stadium in Houston, Texas.

It was a positive start on the road once again for Carl Robinson and his troops. They pressed high and impeded Houston’s ball distribution from the back, pushing them to send balls over the top that could be handled by Kendall Waston and Tim Parker.

However, just as the Whitecaps were playing well, the Dynamo struck first when the Blue and White were caught in transition, as Romell Quioto served a ball from the left flank to be put away by Albert “”La Pantera” Elis.

At the 68th minute, the Dynamo benefited from a soft penalty call by referee Fotis Bazakos, who decided that a gentle collision between Kendall Waston and Mauro Manotas warranted a penalty kick for the Texans.

Very soft penalty given by Bazakos. As the cross came in, Waston bumped Manotas, who went down easily. #NoEraPenal #VWFC #Dynamo #HOUvVAN 👎 pic.twitter.com/tKsphtIWft

The penalty kick was converted by Mexican striker Erick “Cubo” Torres and his team went ahead 2-0. Although Brek Shea cut Houston’s lead in half at the 85th minute via a powerful header inside box off a set piece from the foot of Christian Bolaños, the Dynamo did not surrender their lead and the Whitecaps will return to Vancouver empty handed.

For the second time in as many weeks, Shea has come off the bench to make an immediate impact on the game. The Texas native scored the winning goal for ‘Caps last week in Colorado within minutes of the final whistle.

Once again, Shea put himself in the scoreboard. This time, however, it was not quite enough to help his team pick up points on the road.

These goals come as fantastic news for Carl Robinson.

Shea is one of the best paid players in the Whitecaps roster and the value he provides has been under constant scrutiny since his arrival in Vancouver. Not to mention the fact that the maligned winger came under severe criticism after he was shown a red card on the home game against Toronto FC that propelled the Reds to a victory at BC Place.

With his production starting to pick up, it is good to see that Shea is responding his critics and demonstrating why Carl Robinson brought him into the fold.

"Brek Shea is totally worth the DP money". – me, rewriting twitter history. #vwfc

If it ain’t broke, don’t fix it

For the first time in years, the Whitecaps presented the same starting eleven for the third week in a row. The formation that had proven effective in Montreal two weeks ago and Colorado last week, almost had the same effect against Houston.

It will be interesting to see if the Welsh Tactician modifies his tactical deployment to a more offensive layout when the Whitecaps return to BC Place to play Sporting Kansas City or when their shiny new signing, Bernie Ibini, is ready to play next to Fredy Montero.

Those Latin names, though.

Listen, I get it. Latin American people can have names that are hard to say for Anglo speakers. Names like “Jorge” or “Jaime” (yes, it is HI-meh) can prove difficult to pronounce. However, this struggle is taken to another level by newly appointed TSN commentator and former Whitecaps and Toronto FC midfielder Terry Dunfield.

Between Cristian “Tachara,” Christian “Bolonis” and even “Shannon” Williams, Dunfield can provide viewers with an extra reason to watch the Whitecaps broadcasts, especially when the games are not oozing entertainment. DRINK!

Out of this world security

While the security folks at BC Place do a decent job, they are not as cool as their Houston counterparts.

The Whitecaps will come back into action at BC Place to face Sporting Kansas City on Saturday, May 20th as they attempt to return to winning ways and remain in playoff contention.