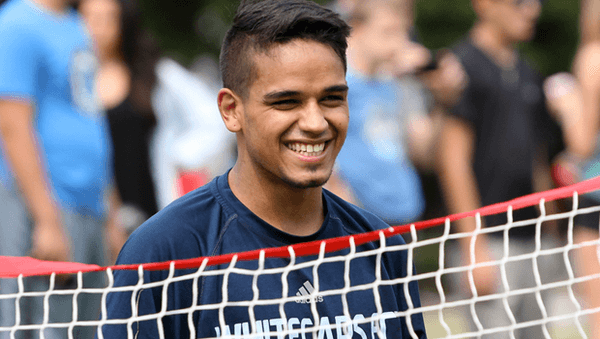 Uruguay is a nation that is known for producing and exporting quality footballers to many leagues all over the world. When you look at the Uruguayan population of 3.5 million, their world class player per capita ratio has to be one of the highest in the world.

This phenomenon is no coincidence. Most Uruguayans see football as their golden ticket to help them improve their quality of life and to provide better opportunities for themselves and their families. Whitecaps FC’s winger, Cristian Techera, is no exception.

Chatting in Spanish with Daily Hive, I asked the diminutive Uruguayan about the main factor driving his decision to leave his country and try his luck in Canada.

“My family,” Techera answers as he looks over my shoulder where his two daughters play on the pitch of BC Place.

“I knew this was a life-changing opportunity. In Uruguay it is very complicated to make a living playing football. I knew that if I wanted to do this, I needed to leave Uruguay and try playing in a different country. Providing for my kids, helping my parents and my wife’s parents were big incentives for me to try playing professionally in another country.”

The man known as “El Bicho” (The Bug) due to his petite size knew that the opportunity the Whitecaps offered was unique and he had every intention of holding on to it with both hands.

“Coming to Vancouver was a great opportunity for me, not only on the pitch but outside of it too. The experience of living in a different country was important for me and my family. It was originally a one-year loan so it wasn’t permanent. I knew I had to take my chance and I think I did. In my first year I felt very comfortable in the city and the team and the club was happy with my performances on the pitch so thankfully everything worked out and the club made an effort to bring me back permanently and I am very happy to be here.”

The Paysandú native arrived in 2015 part-way through the season and, unlike many mid-season additions, Techera showed no struggles adapting to the new league. He quickly established himself as the most dangerous Whitecap in the second half of the season by scoring 7 goals and adding 5 assists to his 2015 tally.

These numbers do not mean that leaving Uruguay for Vancouver was an easy transition.

“When I first arrived I was in great physical shape; I had played five or six games in Uruguay. But it was still difficult because you have to make changes, you have to adjust to the different kind of football that is played here. You have to get used to the refereeing. The rules are the same but the way they are interpreted is different, the surfaces are different, but you have to adapt to all of that.”

Adapting to life in another country, one radically different from your own, can put pressure on any player on and off the pitch. This is why the 24-year-old leaned heavily on his family. His wife and two daughters were, and continue to be, his rock.

“When I left Uruguay, it was the first time that my family left the country. We came to a place with a different language so being with your family becomes that much more important.”

Now in his second year with the Blue and White, Techera has struggled to maintain the same production as in 2015. However, this situation has not put extra pressure on the 5’2’’ winger.

“I feel I have played well throughout the season so I am happy with my performances. Despite the lack of goals, I have started the majority of the games and that speaks to the fact that the coach also feels that way, otherwise you would be out of the lineup.”

“I think all players have good moments and bad moments. It will be difficult to find a player that plays perfectly every game. Sometimes it is not your day but what you can do is work hard, keep your head down, and help the team in other ways.”

Despite dealing with an injury over the past few weeks, Techera has scored in his last two starts, including this absolute beauty against Real Salt Lake.

Having the scoring monkey off his back, “El Bicho” now looks ahead to the remainder of the 2016 campaign and his focus is clear, wining trophies with the Whitecaps.

“We were close to winning the Canadian Championship and it was very disappointing to lose in the last minute because, even though some people maybe don’t appreciate it, as a team and as footballers, winning trophies is the most important thing. So the next step is to continue working so we can win trophies here.”

“After that, what I want is to continue having opportunities that will allow me to keep helping my family.”

Family is the one topic that continues to emerge over and over as I chat with Techera. When asked what his ultimate goal is as a footballer he said simply: “to be the best player I can be for myself and for my family”.

A great man once said that “a man who doesn’t spend time with his family can never be a real man.” If this is true, I can attest that “El Bicho” Techera is indeed a real man.