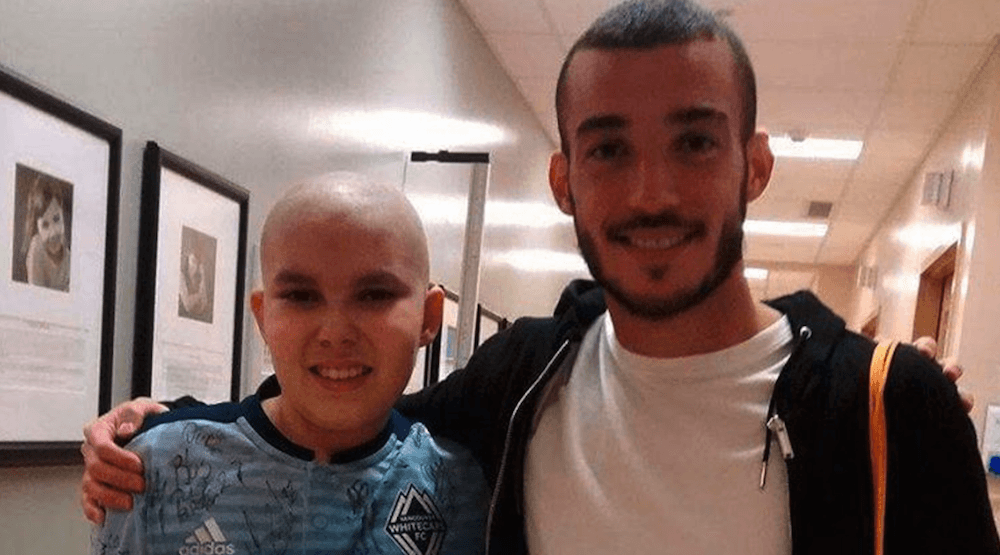 To say Kenton Doust’s life has gone through some ups and downs in the past 14 months would be a drastic understatement.

The 15-year-old soccer fan from Vancouver Island was rushed to Comox Valley Hospital on October 10th of last year, before being airlifted to BC Children’s Hospital the same night after a CT scan revealed three brain tumours.

#tbt to one of the best nights of my life @WhitecapsFC #gocapsgo #VWFC pic.twitter.com/CSArdCMPLw

Teibert sent Doust a pair of signed soccer cleats and a Whitecaps jersey at Christmas last year. A month later, the pair met and developed a bond over playing FIFA, the popular EA Sports video game.

This isn’t a story of a professional team out in the community for a photo op.

When Doust found out in May that – after four months of chemo and 25 sessions of radiation – he was cancer-free, Teibert was by his side.

I love this man with all my heart. He has helped me so much throughout my journey with cancer. He really helped me whilst I was in some of my worst times at the hospital. He has done so much for my family and I we honestly cannot thank you enough. This photo was taken after I had beat cancer he was there to hear my results he was always there for me. I love you man!

“They make me feel special, they encouraged me to keep fighting,” Doust said. “Sorry, I’m getting emotional … it’s hard to explain. I just feel loved. I feel a part of the team, a part of the community that they have. It’s indescribable.”

“I just can’t thank the organization enough … and the wonderful players that we’ve been so blessed to meet,” said Kenton’s mom, Ivonne. “Everybody has been amazing. It’s like a second family now.”

And now, Doust gets to join his heroes in FIFA 17, thanks to the Burnaby-based gaming company Electronic Arts.

Respect to EA for putting @KentonDoust in the game, for those who don't know he beat brain cancer pic.twitter.com/yzJUmRwGvw

Not only is he in the game, he also got his own customized FIFA 17 legend card:

@Firmtinho this too but it's amazing what they did for me and how much it helped me pic.twitter.com/D76rURMdvD

Doust has been included in the wildly popular game, made possible by the Make-A-Wish Foundation. He also got his wish to meet Mexican national team head coach Juan Carlos Osorio, at the EA campus in Burnaby prior to the Canada-Mexico World Cup qualifier in March.