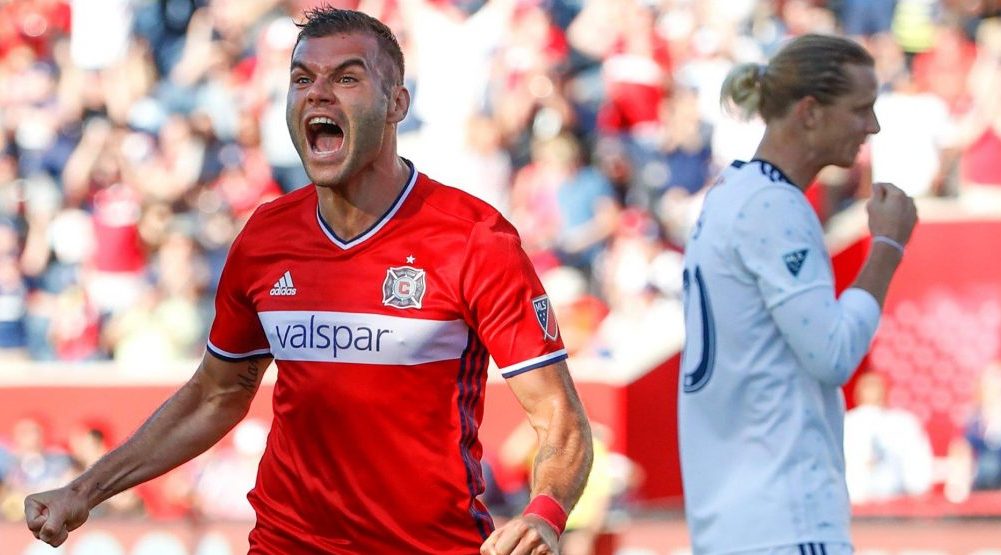 So much for the Vancouver Whitecaps catching the Chicago Fire on a bad day.

Despite going the distance (and losing) in a midweek U.S Open Cup match, the Fire showed zero signs of fatigue or hangover, crushing the ‘Caps 4-0. Chicago ace Nemanja Nikolic had the home team up 2-0 before the half-hour mark and things only got worse from there. The ‘Caps would finish the night down four goals and reduced to ten players after defensive midfielder Matias Laba earned a straight red card in the 78th minute for a vicious tackle.

With their three-game unbeaten streak broken and Laba suspended, Vancouver’s home match against New York City FC on July 5th does not project to be a fun one.

Earlier this week, I suggested on-loan striker and Designated Player Fredy Montero’s form was somewhat troubling. Apparently, head coach Carl Robinson was of a similar mind and left Montero outside the starting XI.

Instead, the Whitecaps’ newest attacking option, Bernie Ibini – apparently healed and ready to go – got the nod up top, albeit once again as a lone striker in either a 4-1-4-1 or 4-2-3-1 formation.

Did Ibini score? No. Did he create chances? Not really, though again, one has to question why he was on the field instead of Montero as opposed to with him (or, really, any other out-and-out forward).

When Montero finally did check into the match shortly after half-time, you’d be forgiven for getting your hopes up.

All right! Montero plus Ibini and Nicolas Mezquida? Surely, there must be some goals in the offing… oh, wait, Ibini’s coming out? So, still no double-striker situation?

Oh. Well, maybe they can smash and grab a goal, spark some sort of comeback…?

What are you doing, Matias Laba? Not sticking like glue to the Golden Boot leader, apparently. Yikes.

What are you doing, Matias Laba?! There are bad first touches, and then there’s whatever you call that. Double yikes.

What are you doing, Matias Laba?!? Since when is shutting off and not chasing down the guy in the box primed to make a cross and/or shot an acceptable way to defend the midfield? Triple yikes.

WHAT ARE YOU- oh, forget it.

Pitchforks if we’re lucky, Guillermo. Whitecaps Twitter™ is not known for being a calm, rational, reasonable place prone to taking results in stride, especially when considering their team is only now recovering from a ghastly injury crisis through the first part of the season.

Well that was embarrassing. When I watch other teams in MLS I see structure, passing, possession. I see none of that with #VWFC

If @WhitecapsFC don't spend money this July transfer window on a CAM, a #8, and a true striker to partner Montero, I'm boycotting. #VWFC

Time to clean house at the Gastown office. A mediocre club and an unhappy fan experience. #vwfc

At least our captain is trying to right the ship while he heals:

I believe and I still believe in what this group is about. No matter what other people say about us! #AlwaysTogether #Teammates pic.twitter.com/kz6X4JXfpm

I sure hope this group is about winning. Or scoring goals. Or, considering tonight’s effort, not letting the defense be shredded like cabbage in a blender before the game is barely twenty minutes old.

You have four days to sort this out, Whitecaps. Get to it.