It seems that no matter how many times we’re told to not feed wildlife, it just doesn’t register for some individuals.

Take, for instance, a pair of Whistler tourists who were caught on camera tossing food out of the window of their car to a black bear.

The Conservation Officer Service posted the photo – with the license plate blurred out – of the offenders caught in the act on Facebook, saying they were fined $345 under the Wildlife Act. 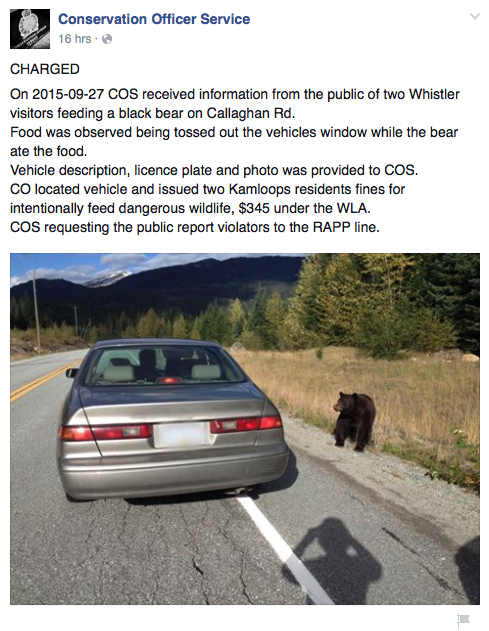 Now apparently it’s necessary to rehash why it’s not a good idea to feed bears. According to  a guide on bear safety on the BC Parks website, “a fed bear is a dead bear.”

“Bears that scavenge food begin to associate food with humans, and become ‘food-conditioned.’ Food-conditioned bears lose their natural fear of humans and become a threat to park visitors as they roam through the park in search of an easy meal,” states the guide.

Conservation Officers are then forced to kill food-conditioned bears since it’s a behaviour that’s impossible to correct and the bears could become aggressive towards people.

So, the moral of the story? Don’t feed the bears. It could cost an innocent animal its life or put your finances at stake.