Sliding sports have trumped all of my assumptions. I once thought that bobsleigh and skeleton were boring ice sports that took forever between runs. But after watching intense yelling, high speeds, crashes, wins, and teammate butt slaps it’s time I introduce you to Whistler Sliding Centre.

If you didn’t have the opportunity to check out the Whistler Sliding Centre during the Olympics, this winter is the perfect time. Crowds won’t be in the thousands and getting the perfect spot along the track is easy. Every spot along the railing is one meter from the ice, and you will hear and feel the sleighs as they whip by at speeds of 120kph. But don’t expect an empty environment, there are tents and screens at the finish line to watch each race. 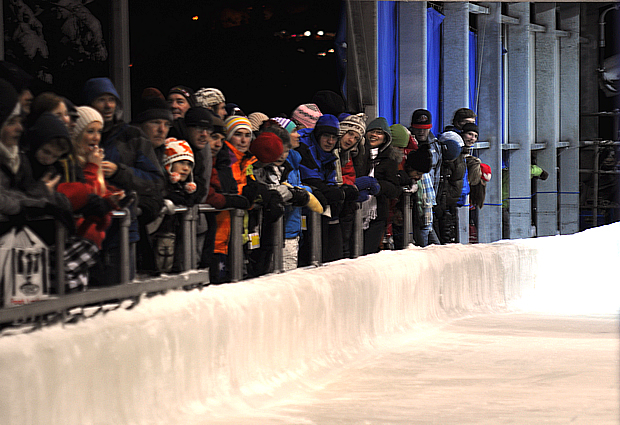 Because the track is so big, you don’t need to fight for a spot along the railing. The crowd isn’t boring, either, and almost everyone is cheering and making the event more exciting. The start and finish lines are the most exciting places to be: it’s at both ends of the track where you will watch the athletes make or break themselves. And although no one wishes for an injury, watching a crash take place at 100kph and seeing athletes slide across the ice gets your heart pumping.

My assumption that sliding runs were slow-paced was wrong. The time between sleds is very quick, only amounting to a minute or less. At the FIBT World Cup there was about 20 minutes between heats with what felt like 30 seconds between teams. The sport is certainly fast-paced.

But you want to do it, too? This December Whistler Sliding Centre is launching the Public Sport Experience Program to let the “average joe” try out what it’s like to take turns with some extra Gs. I’ve been told that this program was being engineered right after the Olympics and will be made as safe as possible for visitors to enjoy. It’s not everyday that the public is allowed on the track, and the new program is going to be a thrill. Details about the program will be posted on their website in December.