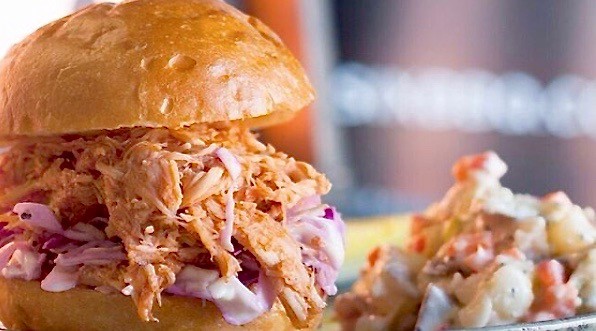 Whiskey Six BBQ has found a brick and mortar home at 826 Renfrew Street in East Vancouver.

Known for its tender Prohibition Pulled Pork and whiskey-soaked Beef Brisket, this organic West Coast-style BBQ joint is coming together after months of searching for the perfect location, and it’s set to open May 1.

Whiskey Six has been operating as a catering service and a pop-up restaurant for the past two years, but now owner Marc Wicks is ready to enhance Vancouver’s small BBQ scene will his organic, locally-sourced meat and ingredients in a permanent home.

Wicks was ecstatic when he finally stumbled upon the standalone restaurant that was previously occupied by The Cake & The Giraffe and Letterpress Bakery as a commissary kitchen.

The restaurant is still in the cosmetic construction stage, but eventually the 1,000 square-foot space will have seating for 30 to 35 people to enjoy the beer, bourbon, and low-and-slow smoked meats, which will be made right in the space’s back patio.

Aside from the usual BBQ suspects of pulled chicken, pork, and brisket, Whiskey Six will have a selection of wild game dishes too, including bison, elk, and deer. Some of the stellar sides to look forward to are the Jalepeno Mac n’ Cheese Poppers, Pulled Pork Sliders, Baby Red Potato Bites, Roasted Veggie Skewers, Creamy Coleslaw, and Country Style Biscuits to name a few.

Wicks aims to use local purveyors whenever he can, including sourcing bread from Fife Bakery, Terra Breads, working with the Vancouver Farmers Market (eventually directly with farms) for produce and ingredients, and stocking the bar with local spirits.

Expect to see offerings from Odd Society, The Liberty Distillery, Sons of Vancouver, Long Table, and a variety of Vancouver craft beer.

The decor of the space will be clean and simple with elements inspired by the Prohibition. The walls will be decked out with black and white photos of the era’s greats like Al Capone and there will also be a selection of wild taxidermy scattered about.

Wicks says Whiskey Six will be open seven days a week – Monday and Tuesday for lunch and Wednesday to Saturday for lunch and dinner. Eventually this joint will do a weekend BBQ brunch which will surely bring in anyone who’s up for a meat-centric hangover cure.