As Vancouver real estate continues to rise in value and the supply of rental units can’t keep up with the demands, a certain subset of the population are packing up and finding areas with more creative and stimulating pastures.

This map highlights the changing settlement patterns of 25 to 39 year olds in the City of Vancouver. They have been labeled as “hipsters” by Bing Thom Architects (more so for the sake of simplicity and not real hipsters seen frequenting the latest cafe or brewery with their Macbooks in hand). These settlement decisions reflect the residential choices and tastes of a particular population, but also the forces of housing affordability, economy and community in the City and Region of Vancouver.

One quick glance and you’ll see that the “hipsters” are fleeing the west side and heading towards dense areas of downtown, East Van and surrounding areas. The creative population loves to assemble in clusters. The greatest cluster can be seen in Mount Pleasant and Gastown.

Where “hipsters” plan to settle down is important to the growth and culture of any city. With house prices creeping past the $1 million mark in East Vancouver, the City will have to work hard to solve this dilemma. If it doesn’t, the soul of the city will be hollowed out and we’ll be relegated to a more homogenous culture.

This map was created using the Statistics Canada’s 2011 Census. (Click to enlarge) 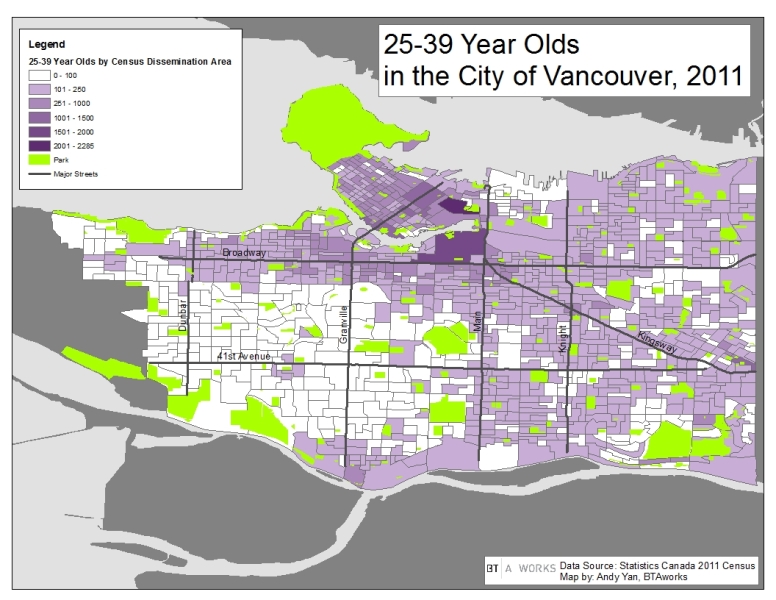 Findings from the map: