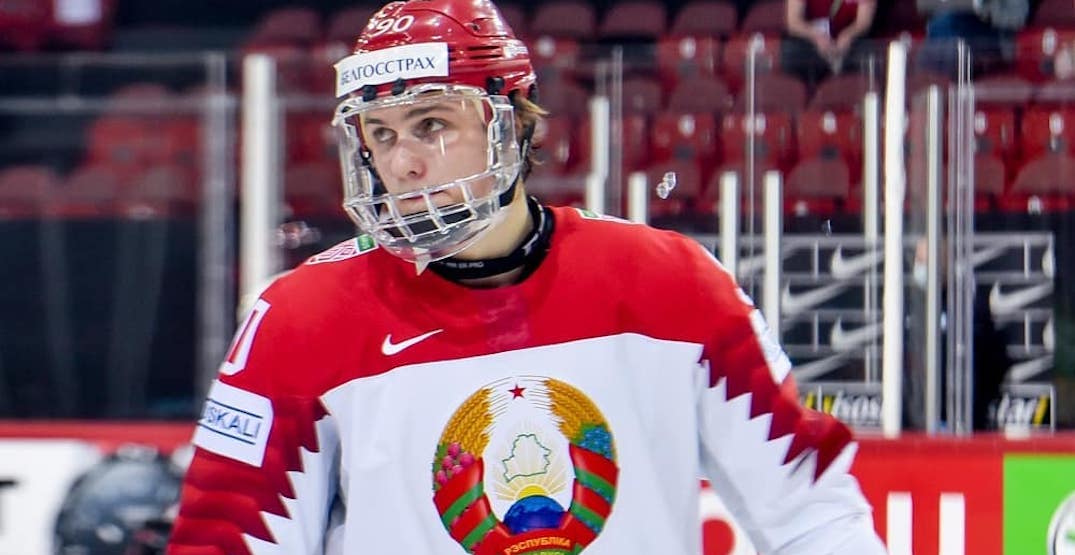 Mikhail Grabovski, Ruslan Salei, and the Kostitsyn brothers defined Belarusian hockey throughout the late 1990s and 2000s; Danila Klimovich could be the next.

Selected in the second round (41st overall) by the Vancouver Canucks in last month’s NHL Draft, Klimovich was the first player from his draft class to sign an entry-level deal. That means the 6-foot-1, 187-pound winger has relinquished full control of his development to the Canucks.

With the AHL’s Abbotsford Canucks and the the QMJHL’s Rouyn-Noranda Huskies both open as options for next season, Klimovich will ultimately have a say where belongs when he attends the Canucks training camp come September.

But how did Klimovich get to this point? How does a prospect go from a relative unknown to a second-round pick?

Klimovich burst into the NHL’s consciousness like a hammer through a thin piece of drywall on a DIY Network show. With six goals and twenty shots in the first three games of the tournament, the right-shot winger was a major talking point among everyone at one of the most well attended scouting events of the 2021 season.

With a dominant 28-goal, 52-point season for Minskie Zubry in Belarus, there was even more opportunity to get an absolute sense of Klimovich’s game after the annual tournament’s conclusion came to an end.

So what did Vancouver see? Why spend such a draft asset on someone like Klimovich? It’s all about potential.

When I first dove into Klimovich’s tape in April, it was shocking to see such polished handling, positive slot attacking habits, and a deadly combination of off-puck positioning and finishing ability.

For this piece, I dove into 12 of his games, a mix of Belarusian league play and his notable U18 tournament to better examine the patterns that made him a top prospect in this draft.

There are a few areas that we must contextualize about his game. Klimovich is often playing with talent below his skill level. He dealt with a sizeable amount of one-and-done attacks, both on- and off-puck, limited by his teammates’ skill levels and even his own decision making at times.

For the most part, when he was driving the bus, good things happened. There was evidence of visible frustration in his game when plays did not turn out the way he wanted, but overall it’s important to take note that Klimovich exploits opponent miscues much like any higher-level prospect if they played his league.

Prospect with a deadly shot

On the surface, one of the most impressive aspects of Klimovich’s game is how polished his shooting mechanics and off-puck movement is in the offensive zone. This blend is a key factor in why the Belarusian was such an effective and dangerous scorer across all his games this season.

While exerting sustained offensive zone pressure, Klimovich constantly found open ice, maneuvering to open passing lanes for his teammates, all the while setting his feet and stick to unleash explosive shots. Used as a true triggerman on the power play, Klimovich lived in Ovechkin’s office, just above the left-hand circle.

Watch as his arms are completely unlocked. He leverages full weight-transfer through one leg, shuffles to get optimal contact points, and times the shots perfectly.

His wrist shot is just as deadly, and he possesses a ton of deception in his release. While maintaining the aforementioned mechanics, Klimovich often drags inwards, changing the angle of his violent wrist-folding release to place shots perfectly.

While the new Canucks’ prospect can rack up a volume of shots from inefficient situations and possesses a lean that affects accuracy, he relays misinformation often while occupying high danger areas in the slot and this makes him so deceptively dangerous.

On the transition, Klimovich really exploited collapsing and passive defending, stringing together large-ice maneuverability and slot cutting attacks into in-tight scoring opportunities once he broke free.

He is crafty, attacking defenders’ triangles, and handling in small space to help overcome some deficiencies in his explosiveness. He protects extremely well, holding the puck in his hip pocket instead of in front of his body. He completed so many entries in my viewings.

He is a player who is truly possessed when it comes to generating scoring chances, and he is not afraid to show his emotions when things don’t go his way.

While Klimovich’s role as a triggerman pushes him into a shoot-first player on most sequences, he showed demonstrative patterns of passing that led to net-positive play, which in turn led to more shooting opportunities.

Klimovich possesses above average vision that allows him to read and react to developing plays, and in turn, create scoring chances off his passing. He finds teammates through layering, pushes the puck to teammates in high-danger areas in the slot, can accurately one-touch the puck, and has the ability to reset under pressure to continue sustained pressure cycling sequences.

On the transition, the Belarusian magnetizes defenders by attacking through the slot, capitalizing on newly opened passing lanes, while also possessing some ability to stretch the puck with precision. Regular eye-line deception, great peripheral vision, and slip passes were hallmarks of his transitional passing sequences.

Elite Prospects’ lead scout David St-Louis has seen a lot of Klimovich, and I tend to agree with his estimation below.

Klimovich doesn't really dominate physically all that often. He's a dangler more than a puck-shielder or engager. There are some cerebral elements to his offensive game, too. I will have a video on him soon.

In my viewings, there were examples where Klimovich absolutely hammering his opponents, but he really doesn’t go out of his way often to dole out punishment.

I was ultimately more interested in sequences where Klimovich utilized his frame to continue sustained pressure attacks and leverage his size to his advantage. Here are a couple of his best sequences broken down:

There are ultimately three areas of development that would make Klimovich a more stable and translatable player.

First, Klimovich must become a better skater. As he stands, the goal-scoring winger possesses stride inefficiencies that affect his explosiveness and overall speed. Inconsistent ankle flexion has led to a hunched back, heel kicks plague his recoveries, and his feet point outwards creating an over reliance on his inside edges. His skating is functional because of his motor, but it could affect his translatability at higher levels.

The Pinsk native will also have to continue to develop his defensive game. While he works hard on his shifts and has a really active probing stick, Klimovich’s awareness in the defensive zone wavered, especially against better competition.

Finally, Klimovich must reign in his on-ice frustrations. While I won’t deny that the fire he possesses fuels him in a way, actions like slamming sticks, mugging opponents, and giving up on plays will not bode well in the pros.

Klimovich’s development will need to be handled with immense care over the coming years. With limited exposure to North American systems, he could be in for a challenging adjustment period. He is a polished puck carrier and shooter but needs time playing in a more stable environment that teaches translatable habits. Klimovich most likely won’t be the best player on his next team, as play will undoubtedly be faster.

Regardless, Klimovich is a fun prospect to root for, who has a real chance to be an impact player.

Hopefully Vancouver fans will see some of that fun at some point in the future.