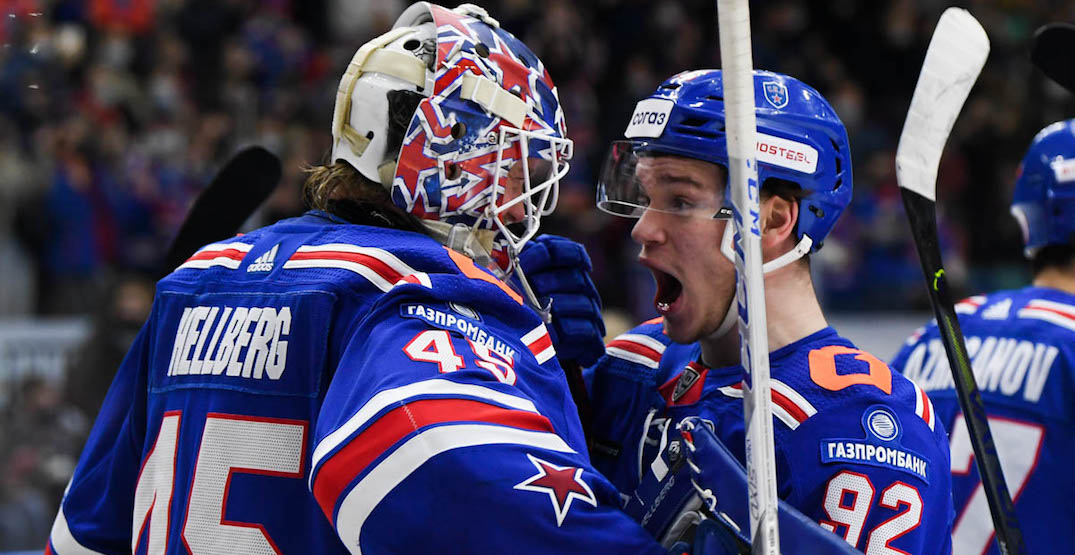 They say good things come to those who wait.

When the Vancouver Canucks drafted Vasily Podkolzin, a player under contract in the KHL for two seasons beyond his draft year in 2019, they were banking that he’d be worth the wait. That wait is almost over, as we are on the cusp of Podkolzin finally putting pen to paper.

Podkolzin is with Team Russia at the IIHF World Championships in Latvia, albeit as an extra forward on the roster. He’s eligible to sign with the Canucks as soon as the tournament ends for Russia.

Here’s a look at the player the Canucks will be getting next season.

Through two rather grueling KHL seasons, the 6-foot-1, 191-pound winger has contented with inconsistent deployment, low ice-times, and opportunity that was disproportionately lower than what he deserved.

Despite roadblocks put in place, the Moscow product has persevered, elevating in meaningful games, while playing a brand of hockey that would endear fans and analysts alike.

Podkolzin put forth a rather heroic performance with his team down 3-0 against CSKA Moscow in the semi-finals. He involved himself in all three goals in Game 4 and scored two goals in Game 5, including a triple overtime winner to push the series to Game 6.

Wrap around jam play for his first goal in Game 5:

Finding open space and one-timing a puck to win the game in triple overtime:

Through three series against Dinamo Minsk, Dynamo Moscow, and CSKA Moscow, Podkolzin only averaged 14:23 minutes a game and started in a bottom-six role in all of his appearances. Podkolzin even saw his ice time drop to 3:17 in one game and still ended up leading SKA St. Petersburg in scoring throughout the postseason.

His 11 points in 15 games ties him with Vitali Kravtsov for the most ever by a U20 skater in KHL playoff history.

In what was an even more impressive feat, Podkolzin also tied the record for most playoff points by an U-20 player in KHL history, accumulating 14 points over two years.

While this list is limited in scope, notice that Podkolzin put up more points in a smaller time period than most of his comparables, contending with current NHL players Vitali Kravtsov, Yevgeni Kuznetsov, Valeri Nichushkin, and Eeli Tolvanen.

The fact of the matter is that U-20 players in the KHL rarely receive the opportunity to contribute — and while Podkolzin played games, he overcame his ice time to be a real factor for SKA.

It’s undeniable that Vancouver is champing at the bit to incorporate Podkolzin into their everyday lineup. The question becomes,

There are translatable NHL habits galore riddled through the tape of Podkolzin’s playoff run.

His greatest offensive strength is his ability to read developing plays and execute high-difficulty passes to his teammates. Particularly, he is extremely good at working under pressure on the perimeter of the ice, finding teammates through layers of opponents, and facilitating off his backhand.

Podkolzin is one step ahead and processes the game at an extremely high level. Watch some of his ridiculous sequences below:

When Podkolzin can rotate and leverage his skill set in the offensive zone, he is extremely effective. While SKA often relegated him to the net front on many sequences, the spontaneity of his abilities should translate perfectly at the NHL level.

He is a proactive defender who is constantly aware of developing passing lanes, working his body and stick to create resistances. He pushes pressure on puck carries, identifies secondary threats and fights endlessly along the boards to win pucks back.

He also is a sophisticated defender on the transition, providing back pressure on many sequences. Watch how he guides puck carriers into the gaps of his defenders while leveraging his strength and supremely active stick to limit the runway for opposing puck carriers.

He carries his battle level and puck pursuit on forechecking sequences as well. Podkolzin is almost maniacal in his approach, launching his body to exploit defenders who protect the puck poorly to create turnovers and changes in possessions.

The area of Podkolzin’s game that represents the most inefficiency is his transitional play — particularly his carry attempts. Podkolzin possesses poor rush patterns, almost always devolving to the outside, and when he does cut into the slot, he often handles into pressure.

These patterns are frequent across his passing and shooting sequences. Notice that opposing defenders often force him to the perimeter into battles, missing pass options along the way. Podkolzin also takes a large quantity of low-percentage shots — which I believe is partly because of direction from his coaches.

On the plus side, when the rugged winger has some space, he can really leverage dangerous power moves where he can handle in small spaces.

Podkolzin’s off-puck transitions are much better. He slips into open space well and can up his pace to attack and drive the net front.

Podkolzin’s inherent ability to win board battles and create second chance offensive opportunities is a real factor here, but inefficiencies in his decision making will be exacerbated at the NHL level as defenders get bigger and more skilled.

Podkolzin also doesn’t have the cleanest stride; the heel kicks, erraticness of his crossovers, and his posture degradation are issues. This becomes less of a concern when you consider the pace the Russian winger consistently plays at, the explosiveness he possesses from a stopped position, and his hockey sense blend.

With all things considered, It’s pretty clear that Podkolzin possesses the skill-set and mentality to be successful at the NHL level and if past results mean anything, it looks like Vancouver is getting a player who could develop into a real dual-threat attacker and defender.

With an entry-level contract on the horizon, the value of the impact Podkolzin can provide can be immense.