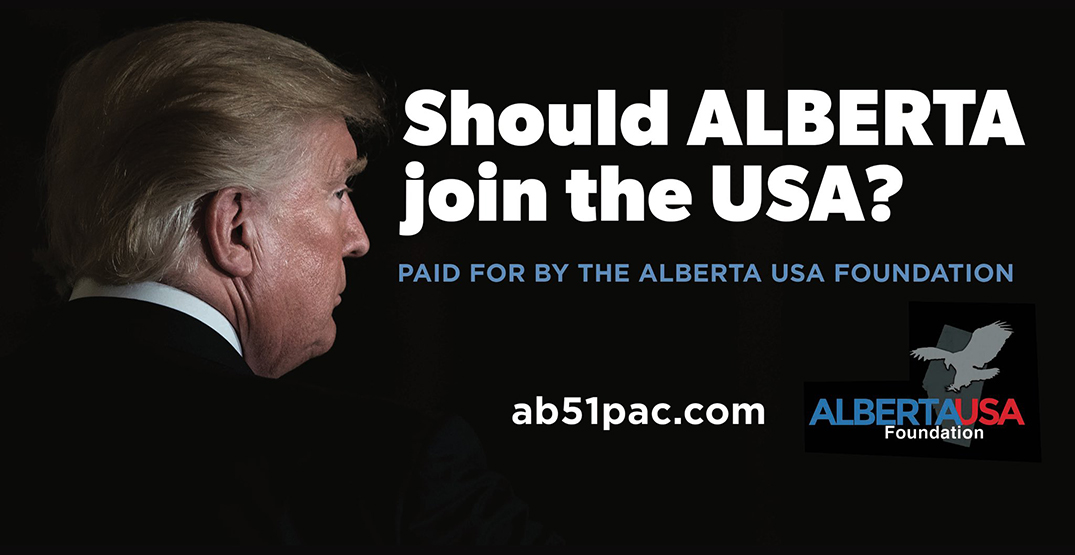 Billboards went up in Edmonton and Ottawa on Friday delivering the latest query in Canada’s ongoing issues with western alienation: “Should Alberta join the United States?”

Beside the question, the digital ads, near the legislature in Edmonton and on Saint Laurent Boulevard in Ottawa, show a picture of Donald Trump’s profile and the website Alberta USA, a political action committee that wants the Wild Rose Country to join the union.

“If you look at all the people who’ve been hurt by Trudeau’s policies against Alberta, it’s not going to change much if you have a Conservative prime minister,” said Peter Downing, the founder of the new political action committee. 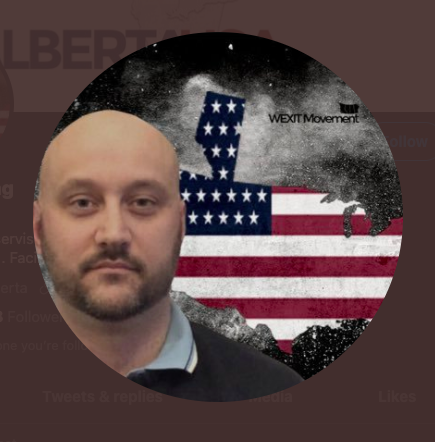 To Downing, best known for co-founding Wexit, this is the natural progression of his homegrown separatist movement.

“Wexit was something that was very small, that wasn’t anything the political mainstream took seriously in Canada and in Alberta,” he told Daily Hive. “Now it’s very mainstream with four political parties across Western Canada that are established right now that are going to give Albertans and Western Canadians something to vote for in the next elections.”

Wexit, which has obtained official party status with Elections Canada, is now being led by Jay Hill, who served as a Conservative MP from 1997 to 2010. Though they endorse Wexit, the party is not directly associated with Alberta USA, and Downing is clear that it’s not a political party: “We’re a not-for-profit organization, we’re a public action committee.”

Downing added that Wexit was just phase one of his plans for Alberta, insinuating that joining the USA was always considered to be the next step.

“Everything that Jason Kenney and the UCP claim to be advocating for is really solved by joining the United States of America to be the 51st state,” he said, pointing to the self-determination granted to each state under the US system.

It’s his belief that the ageing baby boomer population’s retirement will require Ottawa to increase its taxation of Albertans to cover those costs, and that the province is quickly approaching a level of debt that would make it impossible to form an independent state.

“Our credit card is maxed out,” Downing said. “The nice part about becoming an American state is literally we get to be our own country within a country within the number one economy in the world.”

Abacus Data found that there is significant support for separation in the province as recently as July, and in Alberta, 20% of the population like the idea, 26% could live with it, and 54% say it’s a terrible idea.

The possibility of secession is nothing new in Canada, as Quebec came close back in 1995, when a referendum on Quebec sovereignty failed by a vote of just 49.42% to 50.58%.

However, following Quebec’s failed referendum, the Government of Canada enacted the Clarity Act, which states that it would be up to the House of Commons to determine “whether a proposed referendum question was sufficiently clear and whether a referendum result had been adopted by a sufficient majority,” according to University of Victoria Law Professor Jeremy Webber’s The Constitution of Canada, a Contextual Analysis.

When Quebec hosted their referendum in 1995 (the second in Quebec’s history, the first being in 1980), the Bloc Quebecois had 54 seats, becoming the official opposition to the Jean Chrétien-led Liberal government.

While joining the US might have been largely forgotten since the days of Manifest Destiny, and the nascent movement likely being better at grabbing headlines than parliamentary seats, Downing remains undeterred.

“We’re looking at putting these types of billboards all across major cities in Canada to engage in discussions. After Edmonton and Ottawa is done, we’re looking at Toronto, Montreal, Quebec City, Vancouver, and obviously, Calgary.”