Most of Canada has seen a wetter than normal summer this year, save for B.C. and northern Alberta.

While southern British Columbia’s drought continues to wreak havoc on water supply and wildfires, the rest of the country has seen more rain than normal over the past three months.

Analyzing data from 10 weather stations across Canada reveals that all but three cities received more precipitation than typical for June, July and August. Vancouver, Kelowna and Edmonton were the only regions to report less rain, with Vancouver showing the most drastic difference. So far this summer, only 33 per cent of Vancouver’s normal rainfall levels have been recorded.

Elsewhere in Canada, most people have experienced more rain than they might have been expecting. Montreal, Quebec and Winnipeg, Manitoba have seen the largest increase in precipitation from their normal levels this summer, receiving almost 30 per cent more rain than usual at 349.2mm and 317.7mm respectively.

Halifax, Regina and Calgary are not far behind, receiving precipitation increases between 12 and 15 per cent.

Unlike Vancouver, the summer is not typically the driest season for much of Canada. Calgary receives most of their annual rainfall between May and September, as does Edmonton, Regina and Winnipeg.

The change in normal precipitation levels this year is mostly due to an ongoing El Nino effect in the Pacific Ocean which pushes warm and dry air onto the West Coast. The changing weather pattern will continue to disrupt climate normals during the fall and winter 2016. 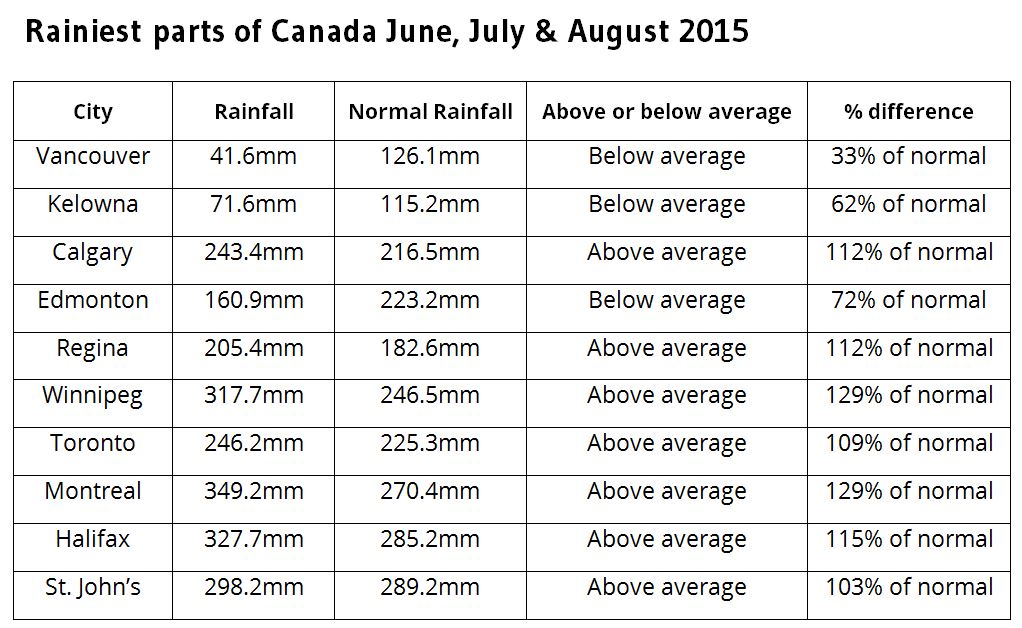