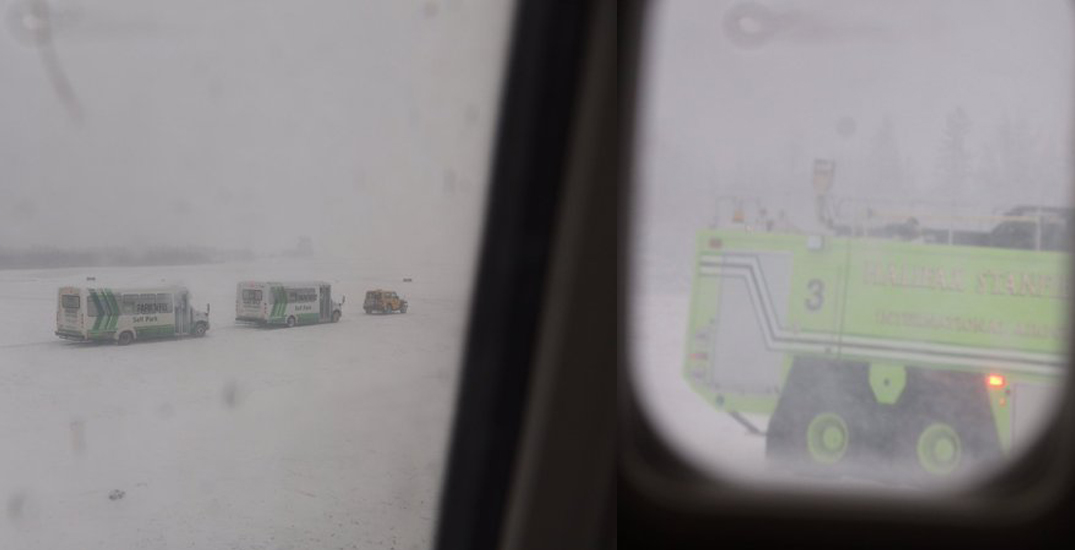 Images of the snowy runway taken by a passenger inside the plane. EricW_Photos/Twitter

A WestJet plane that had just landed in Halifax from Toronto Sunday slid off the runway amid snowy weather in Atlantic Canada.

WestJet tweeted around 2 pm local time that its flight 248 had “experienced an incident” and “departed the end of the runway after landing normally.”

WestJet flight 248 from Toronto to Halifax experienced an incident this morning when it departed the end of the runway after landing normally. There are no injuries to the 172 guests and seven crew members. #WS248

“I’d compare this to driving your car on a snowy road and you slip and slide onto a grassy shoulder,” said Eric Wynne, a passenger on the plane.

He said the plane slid off the runway, ending up about 50 metres from the tarmac in a grassy buffer zone.

My flight, Westjet 248 from Toronto has slid off the runway. No idea of damage although it doubt it. I think we are ok. But a big ass tow truck is in its way.
It could be a while before we get to the airport.

Nobody was injured, and all passengers on board the flight were safely transported to the terminal building using shuttle buses, according to WestJet and the Halifax Stanfield airport.

Update #2: All passengers on board @WestJet 248 have now been safely transported to the terminal building and steps are being taken to reunite passengers with their luggage.

The first group of passengers have left. Each coach carries 20 people. So 40 people has left. But since this is a full, big plane, and I am in the third last row in the back. I’m going to be here for a while. pic.twitter.com/GKWqUqCaz3

WestJet has cancelled several other flights between St. John’s, Halifax, and Toronto while it deals with the issue.

Due to the #WS248 incident, we have cancelled the following flights:

“It was a little surreal,” Wynne said of the experience. He added that the flight crew handled it well, and he’s glad everybody made it out okay.

The luggage was left on the plane while crews investigate, and passengers filled out forms to be reunited with their bags at a later time, Wynne said.