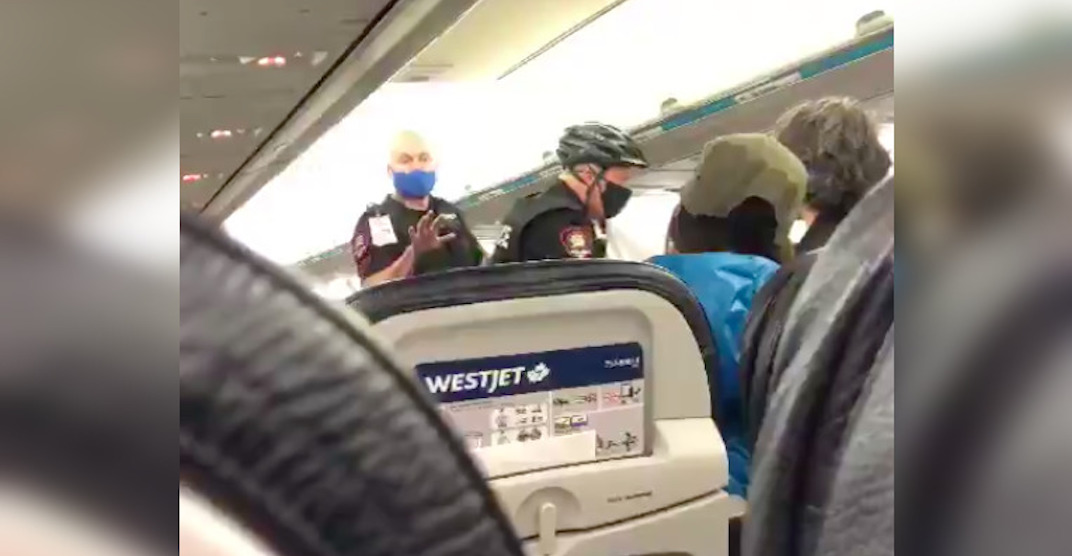 WestJet cancelled a Tuesday redeye flight from Calgary to Toronto after a family refused to put a mask on their 19-month-old daughter.

Passenger Safwan Choudhry says WestJet airline staff were forcing his 19-month-old daughter to wear a mask even though Transport Canada says children under two years of age should not wear one.

In a series of tweets, Choudhry said the encounter was the “most horrific and dehumanizing treatment,” claiming that his three-year-old daughter was wearing a mask before the flight took off but that his 19-month-old was “hysterical” and he struggled to get a face mask on her.

Choudry says a flight crew member approached the family and asked them to put a mask on their child before threatening to call security.

Earlier today my family endure the most horrific & dehumanizing treatment onboard @WestJet plane. My wife was threatening to be arrested & forcibly removed unless my daughters, 3 yrs & 19 months would wear a mask. While my 3yrs wore her mask, the 19 months old was hysterical. pic.twitter.com/MHnaTnKgCU

Choudhry says the encounter prompted some passengers to “hurl racist and Islamophobic remarks” towards his family but said they are “incredibly grateful and humbled by the overwhelming support and love” from the majority of passengers.

We wish to extend our sincere regards & prayers for the passengers who had to endure any form of discomfort & hardship, we’re glad to learn that most passengers have made it to their destination. We are dearly touched by all messages from various passengers throughout the day.

In a statement to Daily Hive, WestJet says it apologizes for the interruption to the flight’s guests and travel plans that were affected by the cancellation of flight 652.

“In this instance, due to non-compliance of the parents to place a mask on their older child who is over the age of two, our crew informed the adults of the regulations we are required to follow,” says the airline. “Our crew requested the presence of the authorities after the guests refused to comply with Transport Canada’s interim order and subsequently refused to deplane the aircraft.”

WestJet says the “rapid escalation” of the situation onboard resulted in crew members feeling too “uncomfortable to operate,” and the flight was cancelled.

The airline says the Choudhry family “did not comply after multiple requests” from staff were made and stressed it is important to clarify that “WestJet did not request the infant under the age of two to wear a mask.”

“Our airline is committed to the highest safety standard and is obligated to adhere to Transport Canada’s regulations,” concluded the statement. “Our cabin crew and airports teams have assisted us in safely flying more than 725,000 guests on more than 19,400 flights during this challenging time to ensure the safety of all.”

WestJet says it has been enforcing a zero-tolerance mask policy since September 1.