One of Vancouver’s oldest buildings, and the last of its kind in the West End, is up for sale. The historic Gabriola House, also known as the Rogers Sugar mansion, is on the market for $10 million.

Last used as an outpost of the chain restaurant Romano’s Macaroni Grill, the mansion at 1523 Davie Street has remained empty for the last several years, though it was owned by the Keg restaurant.

Built in 1900-1901 for industrialist Benjamin Tingley Rogers of B.C. Sugar, Gabriola House “was described as probably the most lavish private home ever constructed in British Columbia,” Heritage Vancouver’s Janet Leduc told News 1130 in 2013. “The stonework comes from Gabriola Island and the stained glass was designed by James Blomfield. It’s pretty special and important as far as we’re concerned,” added Leduc.

Rogers allegedly was good pals with Al Capone, who is said to have been a frequent visitor to the house. Following Rogers’ death, the property was turned into an apartment house, then was converted in the 1970s to the steakhouse Hy’s Mansion. In 1993 it became the Macaroni Grill, and a 1998 fire prompted even further renovations. The house has been vacant since 2008.

Heritage Vancouver had hoped the property could be repurposed to serve the community, and had been pressing for its conversion into a library. 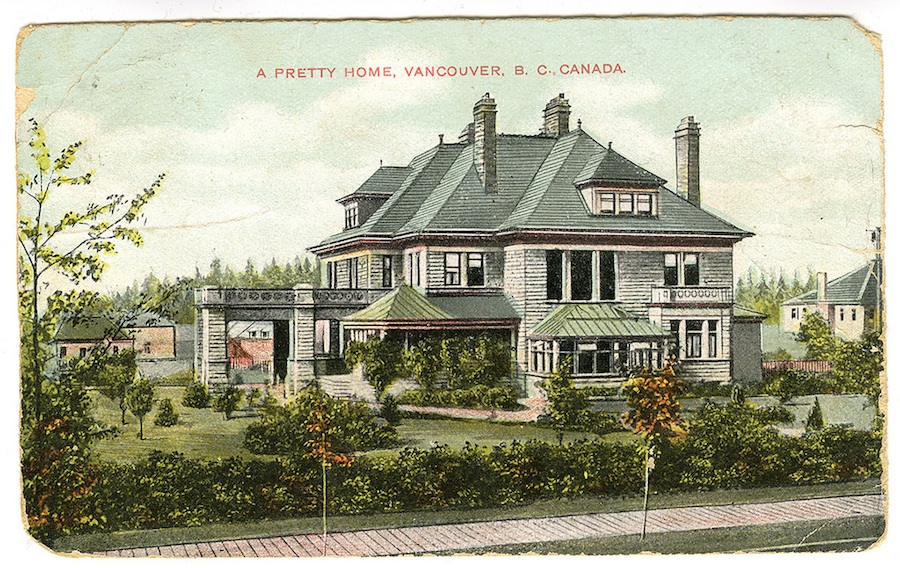 Though recent years have seen the loss of the other remaining West End mansions of the same era, Brian Jackson, the city’s general manager of planning and development told the Vancouver Sun in May of this year Gabriola House could not be torn down, citing provisions within the city’s new West End plan protecting the property.

Jackson also explained: “[T]he heritage density bonus of doing anything with that has been stripped away so that nobody can build on that property beyond the mansion. So there is no financial incentive for somebody to come in and build something bigger.”

The listing for Gabriola House indicates the building has 17,327 square feet and is designated for retail, with office and restaurant space.

Not mentioned in the listing, however, are the other rumoured occupants of Gabriola House, namely its alleged ghosts. The Ghosts of Vancouver claims Gabriola House is haunted by one of Rogers’ sons, “who committed suicide by jumping out of a second storey window.” There have been reports of sightings on the staircase, floating cutlery, and mysteriously banging pots and pans in an otherwise empty kitchen. The ghost of an older man, possibly a former apartment tenant or house guest, has also been spotted on the grand staircase of the majestic manse.

Prospective buyers may also be curious about the underground tunnel that is said to be under Gabriola House. “This tunnel was used for bootlegging and prostitution running during Vancouver’s prohibition era,” notes Ghosts of Vancouver.

UPDATE: Blythe Clark, Rogers’ great-granddaughter, contacted Vancity Buzz regarding the urban legends surrounding Gabriola House. Clark said in an e-mail that her family has “no knowledge of Al Capone visiting the house and can confirm that none of Benjamin Tingely’s four sons committed suicide.”