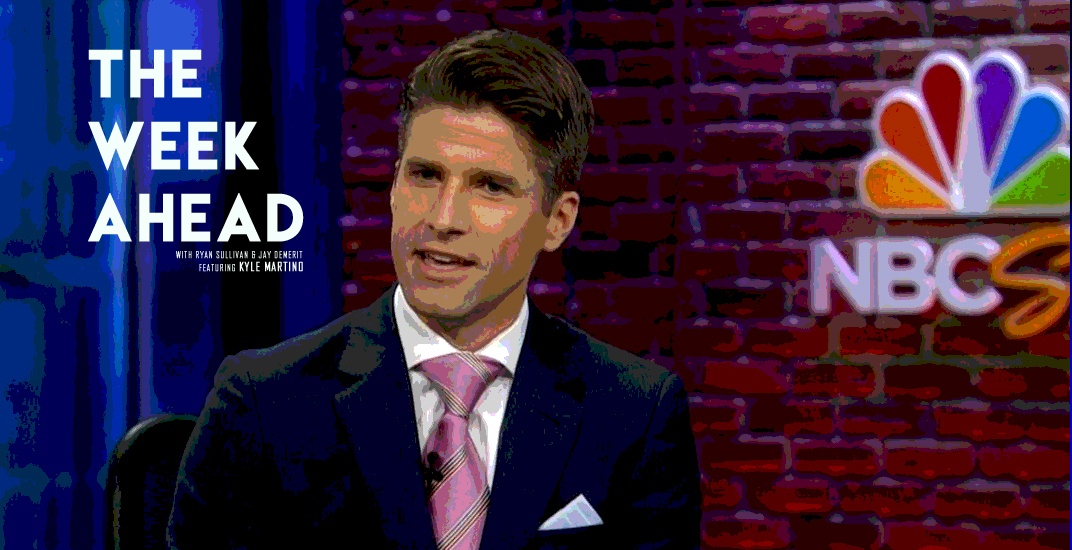 The Week Ahead Podcast returns for its 15th episode with myself (Ryan Sullivan) and former Vancover Whitecaps captain Jay DeMerit. This week we feature the next potential President of the United States…Soccer Federation Mr. Kyle Martino of NBC Sports. This interview is also courtesy of Burrard Physiotherapy.

Once again, the show was featured on our Facebook Live feed on the Green Men page here/below and it also starred Jay’s son Oakes as well.

There were quite a few choices to take home our coveted ‘Jackass of the Week’ title as well, but we decided that Mike Adams of the Carolina Panthers was probably the way to go. He picked off Drew Brees instead of swatting down a 4th down pass and in turn, cost his team 16-yards and maybe…maybe…potentially…cost Carolina a chance at taking the lead late.

Not to be outdone, though, Richine Incognito checked in again with a few more alleged racial slurs. We may never have confirmation but after his bullying of Johnathan Martin a few years ago in Miami, we certainly weren’t walking on egg shells when chatting about the class of the Buffalo Bills offensive lineman.

Great win to day! And 64, you goin have to come harder than some weak racist slurs. I’m proud of my African heritage, as are 70% of the other Black players in this league. #Iaintjonathanmartin!

Following our discussion about the infamous o-lineman, we also chatted with Ekam of Ball Don’t Stop to get his take on this week’s NBA Game of the Week – Cleveland vs. Toronto on Thursday night.

Jay and I then took live questions and comments in stride and handed out a $25 GC to Yagger’s Restaurants and Sports Bars, along with a copy of the Green Men autobiography Behind The Green .

BTW, did you miss out on Jordan Subban singing Phil Collins a few weeks ago? No problem, here that is.