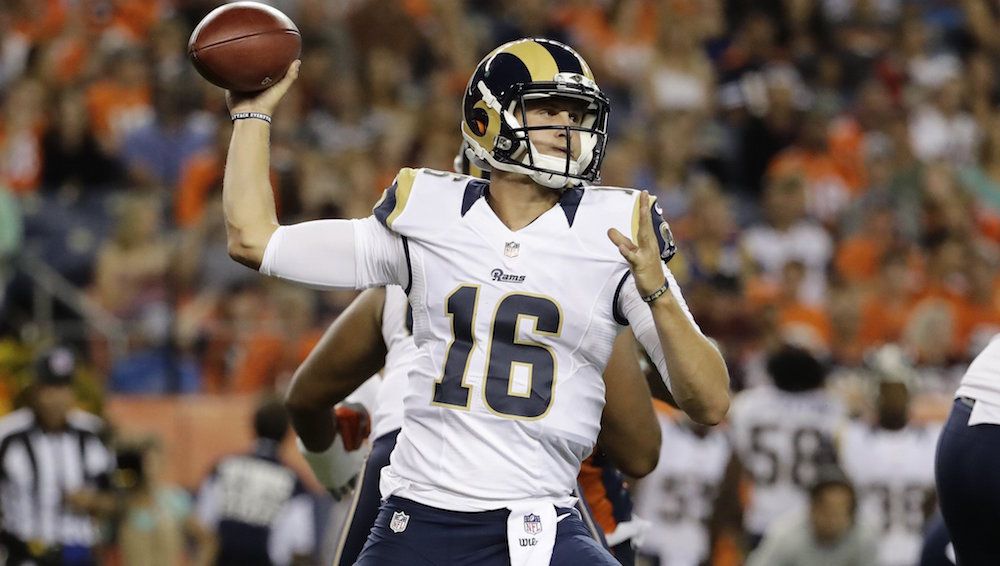 Week 11 will see the debut of Jared Goff, the quarterback of the future in Los Angeles. With a lacklustre season in the books so far, the 4-5 Rams might as well see what they’ve got in the young signal caller.

After having such high hopes for Goff, Rams fans have had to wait until Week 11 to see the number one overall pick make his debut. He’s looked extremely raw and has struggled in practice which made Jeff Fisher reluctant to start him. After another game where the Rams failed to put up a touchdown, they’re turning to their prized rookie to try and turn their fortunes around.

The Dolphins have been on a roll lately with four straight wins. Their ground game has been unstoppable but face a strong defence with the Rams in LA.

With a rookie QB starting, we’re expecting a lot of struggles from the Rams offence. The Dolphins should be able to crowd the box, forcing Goff to beat them with his arm. We don’t think he can win his first game in the NFL.

The Vikings roller coaster of a season continues as they’ve now lost four straight games after starting the season 5-0. They’re a much better team at home but are running into a talented Cardinals team that still hasn’t put it together this season.

The loss of Adrian Peterson and Teddy Bridgewater are starting to show their effects, and the vaunted Vikings D that started the season has tailed off. The Vikings are a good team but are no longer a contender in our minds and we’re not ready to take them to end their losing streak.

With a blitz happy team and a shutdown cornerback in Patrick Peterson that will shadow Stefon Diggs, we like the Cards to win a close game in Minnesota.

Both these sides will be a little disappointed with how their seasons have gone, and this late in the season, this one is shaping up as a must win for both teams.

Fresh off of their bye week, the Bills desperately need to find consistency after three straight losses. However, they’ve had some time for their offensive weapons to recover, namely Lesean McCoy, so we think they will find some offensive room against a Bengals defence that’s been playing with fire, giving up more yards than their offence can produce in four of their last five games.

The Bengals also are battling nagging injuries to key players as Eifert, Dalton, and LaFell have been limited in practice.

In a battle of two desperate sides, we like the way Buffalo has looked in recent games against tough opposition, despite the losses. They can win outright here, so taking the points makes sense.

If the ‘Hawks win in Foxborough wasn’t a statement game, then we don’t know what is. The ‘Hawks have made it clear to the rest of the NFL that they’re a favourite to win the Super Bowl once again. The second half of the season has been where the ‘Hawks have typically been dominant. Russell Wilson is healthy now, Thomas Rawls is coming back from injury and their defence looks to be in fine form.

The Eagles got a statement win of their own, beating the Falcons and improving to 5-4. They’ve still only won two of their last six games and are falling behind the Cowboys in the race for the NFC East.

We’re expecting the ‘Hawks defence and the home field advantage to force Carson Wentz into some tough plays. The Eagles don’t put up enough points to cover here, so take the ‘Hawks.

This Texans defence isn’t bad but will struggle to stop the Raiders balanced attack, led by a now healthy Latavius Murray. As they showed against the Broncos before the bye week, the significant investment they made on their offensive line has paid off.

The Houston Texans are fresh off of a close call against the lowly Jags, though to be fair to the Texans, the Jags made it close with their typical late fourth quarter garbage time touchdown from Blake Bortles to Allen Robinson.

Expect the Raiders to roll up significantly more than the twenty points the Jaguars managed last week and pull out the win in Mexico City.