Canada might be in for a milder winter than usual, according to The Weather Network.

While some parts of the country have already experienced winter at its worst, other parts may be getting a warmer winter than usual.

“A developing El Niño typically signals a milder winter across most of the country, and for Western Canada that is exactly what we expect for the upcoming season,” said Chris Scott, Chief Meteorologist at The Weather Network, in a statement.

“For the Western Prairies, this means the abnormally cold fall has not been a sign of things to come. However, from Ontario to Atlantic Canada we are seeing a snowy sneak preview of what will become the dominant pattern for winter.” 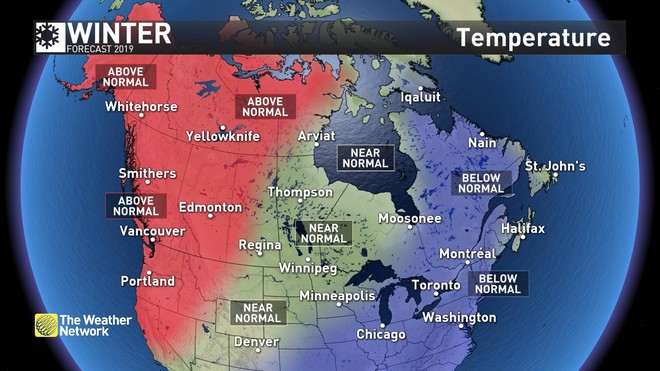 Expect a milder winter across the province with fewer episodes of arctic air in the Lower Mainland and fewer threats of significant snow in coastal areas and interior valleys, according to the weather report. There will be below normal precipitation with fewer storms and more periods of dry weather. But, the pattern will break down at times, potentially bringing an abundance of rain and mountain snow in a relatively short period of time. The forecast also suggests that the ski season could be challenging at times, but is “by no means a total write-off.” And the good news for the west coast is that preliminary indications call for an earlier arrival of spring weather.

Being in the middle, The Prairies will be a battle zone between the mild Pacific air to the west and arctic air to the east. This will result in a changeable winter with back and forth swings in temperature, which are expected to tip to the mild side of normal across Alberta and into western Saskatchewan. But, these temperature swings should come close to offsetting each other across the eastern Prairies. As most winters, extended periods of harsh weather are expected, along with periods of mild weather.

Sadly for Ontario and Quebec, a long, cold winter is probable across most of the region. The Weather Network is forecasting the colder than normal temperatures experienced so far in October and November will dominate through the winter, especially during the season’s second half. But, winter is expected to take a breather at times during December and the traditional January thaw is still expected with the potential for an extended thaw before a bitter conclusion to winter. Near normal seasonal snowfall is anticipated despite fewer high impact storms than normal. But, the Greater Toronto Area may fall short of normal snowfall, which is good news for the region. The area will be teased with early spring weather in March, but overall we expect a delay in the arrival of consistent spring warmth. 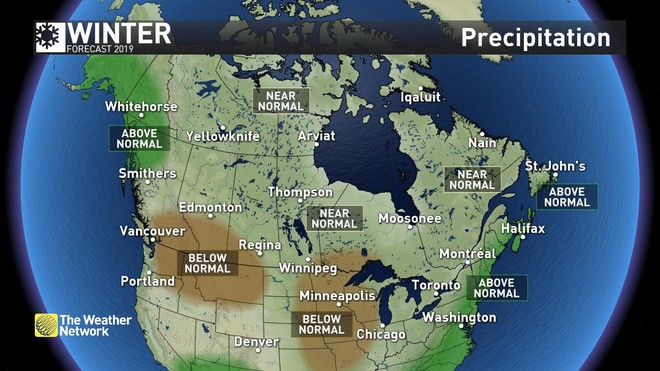 November was a snowy month so far and has provided Atlantic Canada with a preview of the long and stormy winter that is anticipated across the region, according to the weather report. An active storm track from the Gulf of Mexico, up the US East Coast and into Atlantic Canada is expected. And while many of these storms will track offshore and keep snow as the dominant precipitation type across the region, some of these storms will track further north. The winter pattern is expected to stay until early spring.

Surprisingly here, above normal temperatures are expected to dominate much of the region, including all of the Yukon and Northwest Territories and western Nunavut. However, near to below normal temperatures are predicted for eastern Nunavut including Iqaluit. There will be above normal snowfall across the Yukon and into western Northwest Territories.