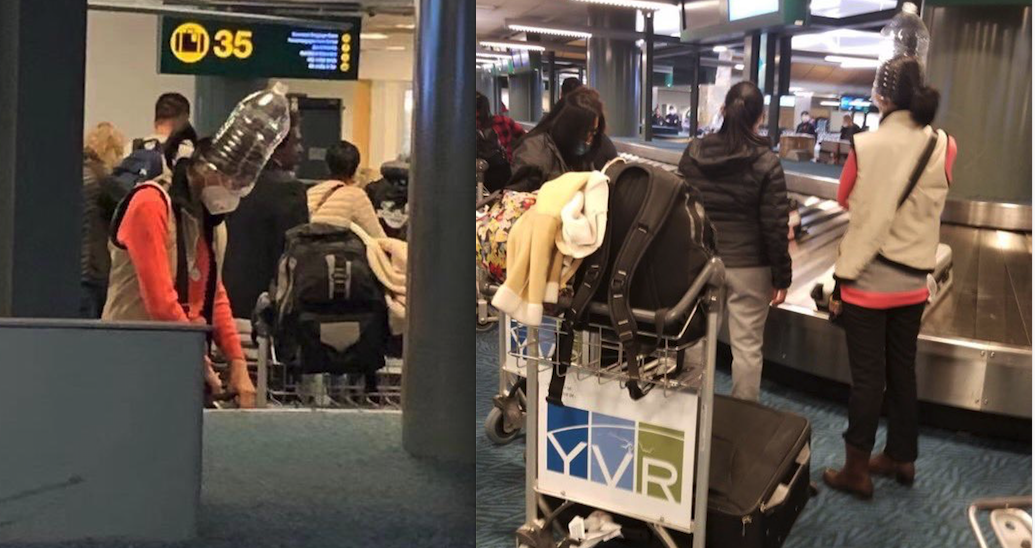 While masks seem to be a popular method of protection against the coronavirus, one traveller at Vancouver International Airport was spotted getting a bit more creative — by using a water bottle to cover their entire face.

A photo circulating posted on social media and sent to Daily Hive shows an individual wearing a large water bottle covering their eyes and nose as a protective mask.

@yvrairport I thought I had seen it alll.. #coronavirus pic.twitter.com/Px07gjHvRs

It may seem strange, but other travellers across the globe have been spotted using the same method.

On Tuesday morning, BC health authorities confirmed the first presumptive case of coronavirus in BC.

A man in his 40s returned to Vancouver from a work trip to Wuhan, China, last week and began experiencing an “onset of symptoms.”

Upon his return home, the man voluntarily self-isolated and health officials have been following up with anyone he may have been in contact with.

A second test of the lab results will be done at the National Microbiology Laboratory in Winnipeg. Cases are considered presumptive until confirmed at the Winnipeg lab. The secondary testing will be completed in several days.

In a statement, Dr. Bonnie Henry, Provincial Health Officer, says the risk of spreading the virus within BC “remains low.”

She adds, “It is not necessary for the general public to take special precautions beyond the usual measures recommended to prevent other common respiratory viruses during the winter period.

“Regular handwashing, coughing or sneezing into your elbow sleeve, disposing of tissues appropriately and avoiding contact with sick people are important ways to prevent the spread of respiratory illness generally.”

As for the rest of Canada, three people are being investigated in Quebec for potential cases.

According to the province, on Thursday, January 23, Sunnybrook Health Sciences Centre admitted a patient who had a fever and respiratory symptoms and was brought in by paramedics.

The patient, a man in his 50s, was screened and recent travel history to Wuhan, China, was confirmed. He was immediately put under isolation.

The Ontario health authority adds that there are currently 11 cases under investigation.