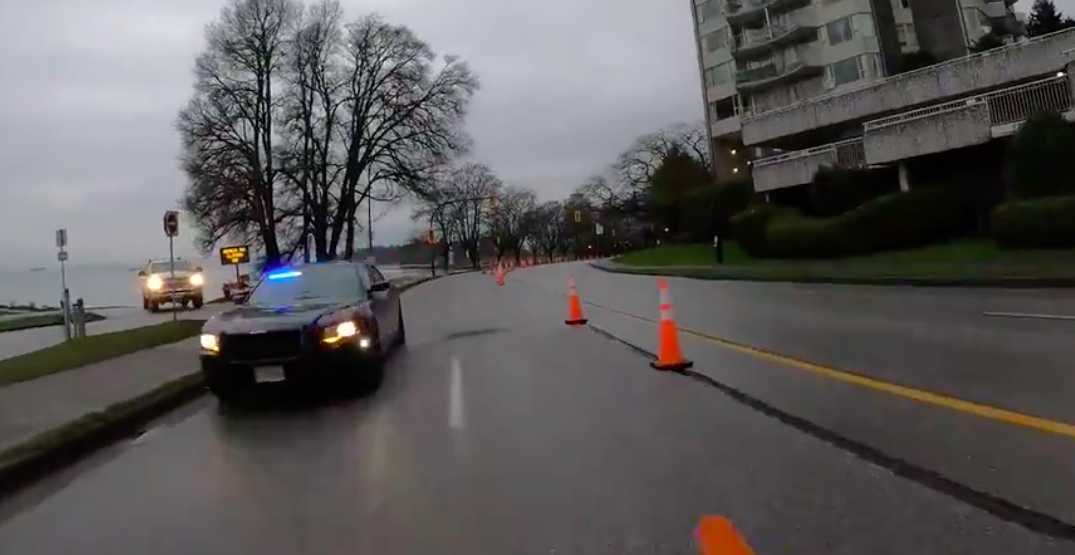 A woman who was bike riding with her nine-year-old daughter in the bike lane on Beach Avenue had an unexpected encounter with what turned out to be an unmarked VPD cruiser this week.

On Twitter, a woman who identifies herself as Lucy stated that the incident happened shortly after 9 am on Wednesday.

“As we approached Bidwell St., I saw a car with its headlights on travelling westbound,” she wrote. At first, I couldn’t see whether the car was in the bike lane or on the road because Beach Ave curves at Bidwell Street.

The car, however, was “travelling very fast,” and Lucy quickly realized it was approaching her and her daughter head-on in the bike lane. In response, Lucy told her daughter to pull over, and “I positioned myself in front of her and gestured for the driver to stop.”

At that point, the driver of the vehicle then activated the car’s flashing lights, identifying it as a police cruiser, “and passed us.”

…stay where we were. One of the witnesses I spoke to afterwards really sums it up, “my god, I saw them coming and you coming and I was like oh my god… I don’t know anything that justifies that kind of behaviour. We’re shocked too.” pic.twitter.com/Y0z0M9y8G4

Lucy added she had no idea that the car was, in fact, a VPD vehicle until its lights were on.
“My choices were to take my daughter across the path of the black unmarked [vehicle] speeding towards us, into two lanes of general vehicle traffic or stay where we were.”

She notes that had the cruiser had its lights on the whole time, “it would have been an order of magnitude less scary.”

VPD responded to Lucy on Twitter, stating that they understand the situation “would have been distressing” for Lucy and her daughter.

They added that the officers in the video were “responding to a crime in-progress nearby,” and were able to get to the crime scene with enough time to arrest the suspect, who they identifies as serial offender.

“Our officers were responding to a mischief in progress,” VPD Const. Tania Visintin told Daily Hive. “Our officers used Pacific Street as the quickest and safest route.”