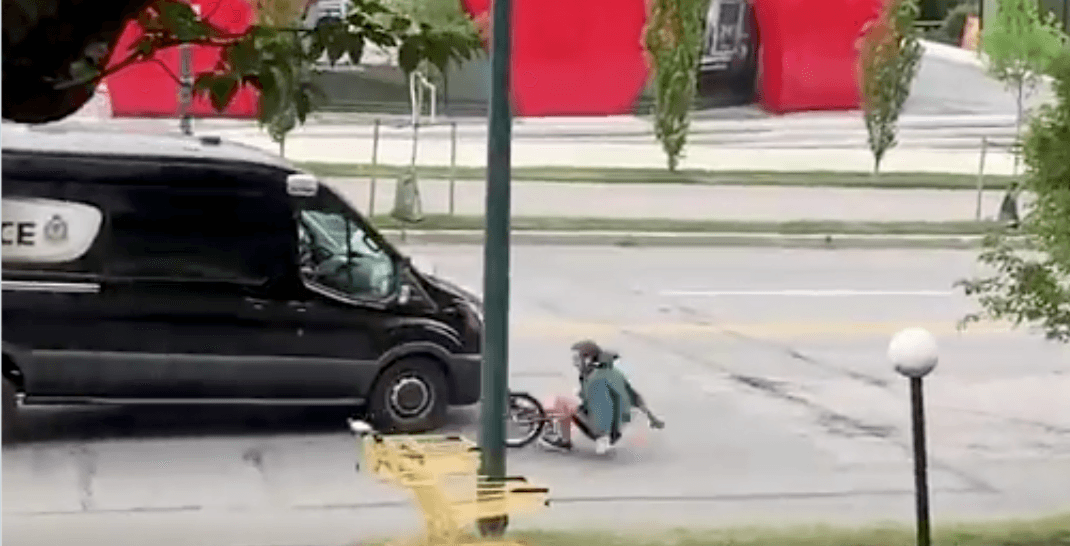 A cyclist riding his bike without a helmet admits he was being an “idiot” after being hit by a marked Vancouver Police van last month.

The incident was captured on video and posted on social media.

Well… at least @VancouverPD were on scene right away 😝 A heart in throat moment for sure. pic.twitter.com/zXCcqszFZ0

The cyclist makes a sharp right turn, falls off their bike, and then gets hit by the VPD van.

Cst. Steve Addison with the VPD told Daily Hive that the incident took place on July 7 around 4:30 pm near Emily Carr University on Great Northern Way.

“The police officer offered assistance to the cyclist, who was uninjured, and was able to carry on after apologizing for causing the collision.”

The cyclist commented on the incident on Reddit and admitted he made a “bad mistake.”

“Bottom line- I’m an idiot,” he wrote. “I made a bad mistake going down this hill the way I did and I’m lucky to be alive. Taking risks is part of what I love in Bmx and this risk happened to be very poorly managed ❤️🙏 I understand that for some people this lifestyle doesn’t make sense but for me it’s a passion to push the boundaries of what is possible.”

The cyclist went on to say the “officer was very concerned about [him] and was nice enough to let [him] off with just a sore ass.”

“I am embarrassed to put our VPD in such a negative situation and honoured to say that on this day our city blessed me with a charitable policeman who has a good heart and I will forever feel indebted to him for slamming on his brakes and saving my life,” he said.