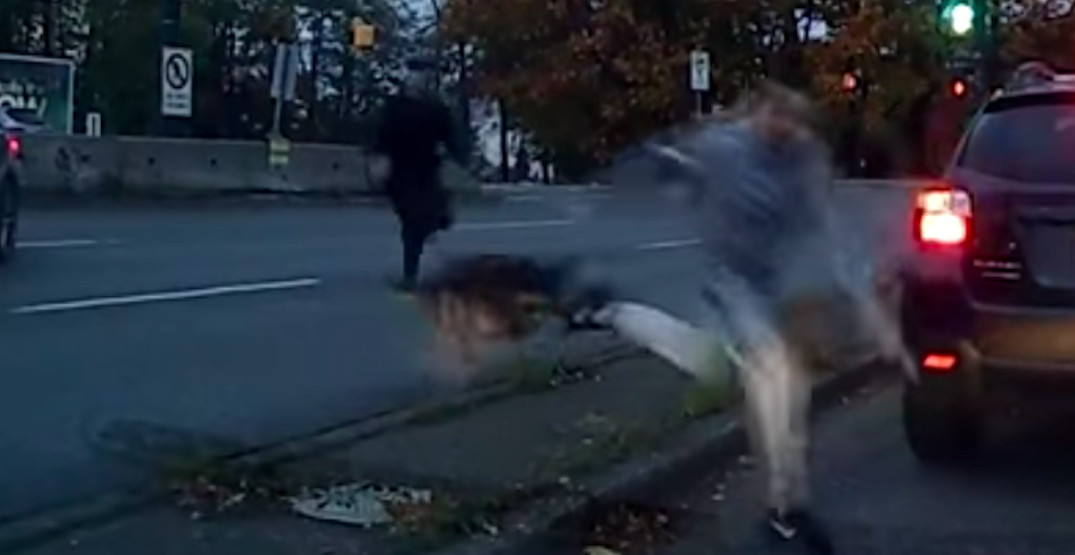 A chaotic scene in south Vancouver involving the takedown of a suspect with help from a VPD police dog unit has been captured on dashcam.

Video shared to YouTube shows a man in a track suit running through traffic several times — even being struck by an oncoming car — before a K9 cop lunges and bites and takes the man down.  The video then shows police swarming in and restraining the suspect.

According to Vancouver Police (VPD), the situation began last Tuesday night, when officers found men in a parking lot at Granville Street and Southwest Marine Drive who were allegedly involved in a break-in to a home less than an hour before on West 37th Avenue near Granville Street.

Two of the men were arrested without incident by the VPD, but the third man allegedly fled the scene before attempting to car-jack a taxi full of people.

He then ran to a gas station, where he attempted to force a man out of his car, say VPD.

At that point, the suspect was arrested by a canine unit and taken to the hospital for treatment.

Now, video of the takedown by the the VPD has surfaced online, and VPD Const. Jason Doucette confirmed with Daily Hive that the footage is indeed of the incident.

The video was uploaded by YouTuber xSupaD, who said the footage was captured from the dashcam camera of a friend’s vehicle.

VPD announced that as a result of the incident, charges have been approved against Graham Scott Beattie, 40, of Surrey, 42-year-old Richmond resident Harold Jason Gillis and 34-year-old Vancouver resident Joseph Leon Kidd.