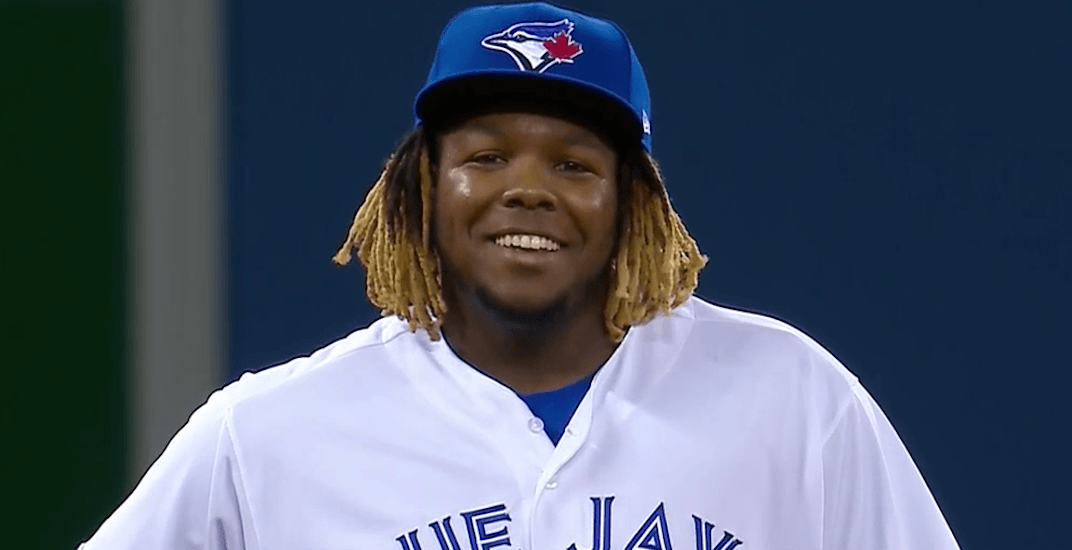 Vladimir Guerrero Jr. didn’t deliver the game-winning hit in his Blue Jays debut, but he set up a dramatic walk-off for his teammate, Brandon Drury.

Guerrero couldn’t have picked a better time to get his first hit the big leagues. His double down the right field line to set the stage for the Blue Jays dramatic walk-off 4-2 win over the Oakland Athletics.

From before the first pitch to the final play of the game, Blue Jays fans were on their feet for nearly every play he made. Vladdy was like a rock star out there.

When Guerrero picked up a foul ball and threw it into the stands, fans gave him a standing ovation. When he strolled to the plate for the very first time, the crowd roared. When he grounded out to first base in his very first at-bat, people showed their adoration for his effort.

Then when he hit a pair of fly balls to the warning track, the roof nearly exploded off the Rogers Centre. On the field, it was a fairly routine game for any Major League third baseman, but it was nothing but “The Vladdy Show”.

It’s difficult to glean anything substantial from game one of Guerrero’s big league career, but the narrative surrounding his very first game in Toronto was the sheer hype he generated during his debut.

First BP with the Blue Jays? Off the window! 😳@vladdyjr27 | #LetsGoBlueJays pic.twitter.com/FHcIvQe2tJ

Not only were millions in Canada watching the new face of the franchise, but the entire baseball world was glued to Guerero’s MLB debut. Even though there were less than 30,000 fans in the stands, his at-bats replicated a playoff environment for the Blue Jays.

Ordinarily, this would be a game that would draw very few eyeballs. Nobody’s rushing to watch an early season series opener between the Blue Jays and the Oakland Athletics. But all eyes were on Guerrero as he settled into his new home in Toronto. His at-bats were must-watch TV.

You've heard all about Vlad Jr.'s 80-grade bat, but how about his 60-grade arm? pic.twitter.com/6vrBYj4ddC

Guerrero looked every bit a major leaguer out there in the field and at the plate. Aside from some first at-bat heavy breaths in the batter’s box, he was unfazed by the bright lights of the big leagues.

Then again, this is someone who grew up around Major League Baseball, with a Hall of Famer for a father and an uncle who enjoyed an eight-year career in the show. Guerrero is no stranger to the bright lights that come with playing for “Canada’s team.”

Game one of the Vladdy era is in the books and the Blue Jays have a perfect record, 1-0. That won’t last for long, but what will remain is the sheer excitement and energy Guerrero has brought to the Blue Jays fan base.