Thousands of British Columbian men bravely signed up to fight against enemy forces abroad during the First and Second World War, along with the support of thousands more women who worked as nurses and personnel on the battlefield. Although no blood was shed at home in Vancouver, the history of the war clearly left its mark on the growing metropolis.

Here is a quick look through historic photographs capturing Vancouver city life during WWI and WWII.

Soldiers, family and friends crowd outside the Vancouver C.P.R. Station (not pictured) in 1914 as the first troops depart to Europe. Location: Southwest corner of West Cordova Street and Seymour. 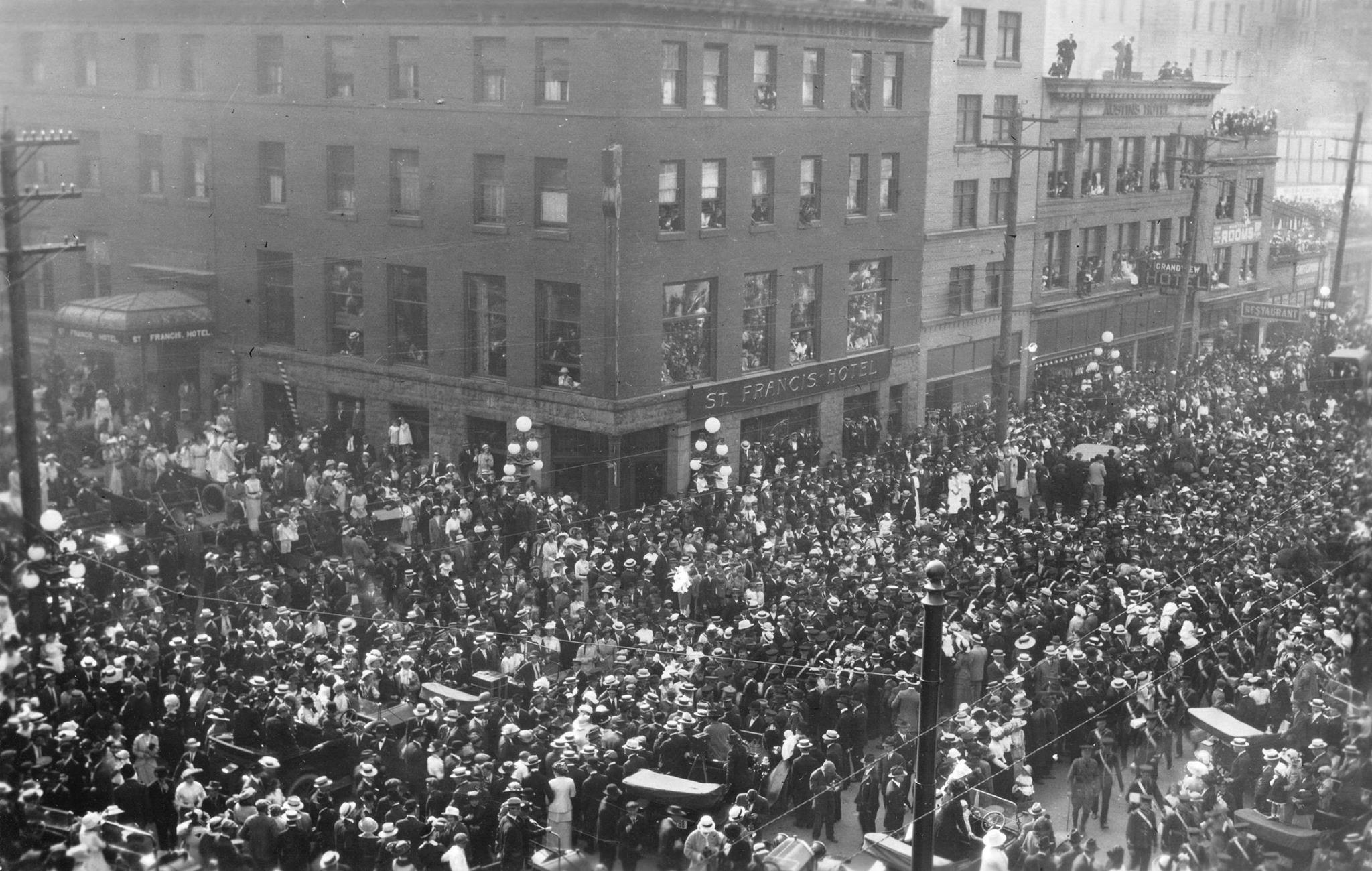 The 29th military departure leaves Vancouver by train at the start of the Great War in 1914. 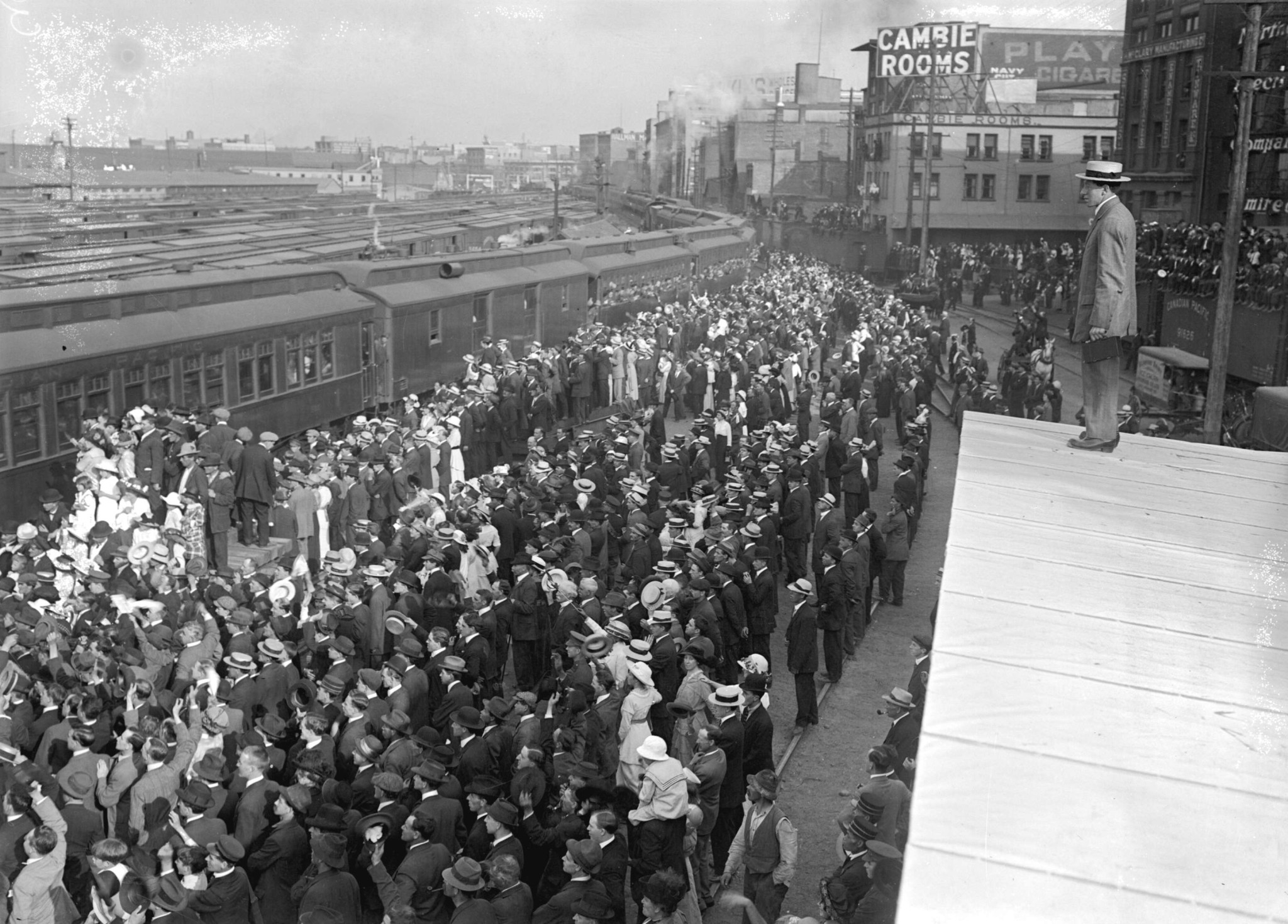 Crowds wave goodbye to the departing troops at the C.P.R. Station in 1914. 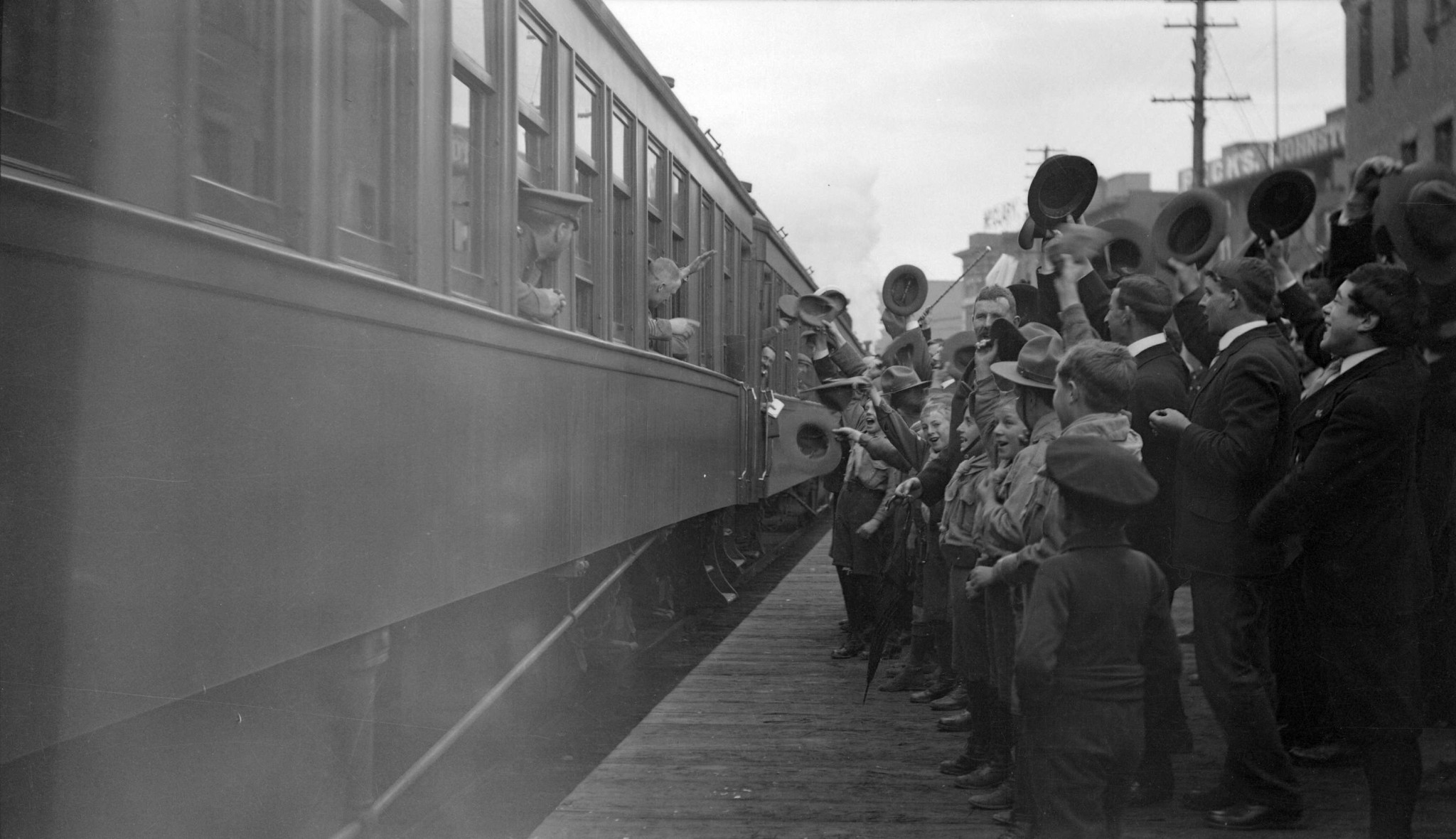 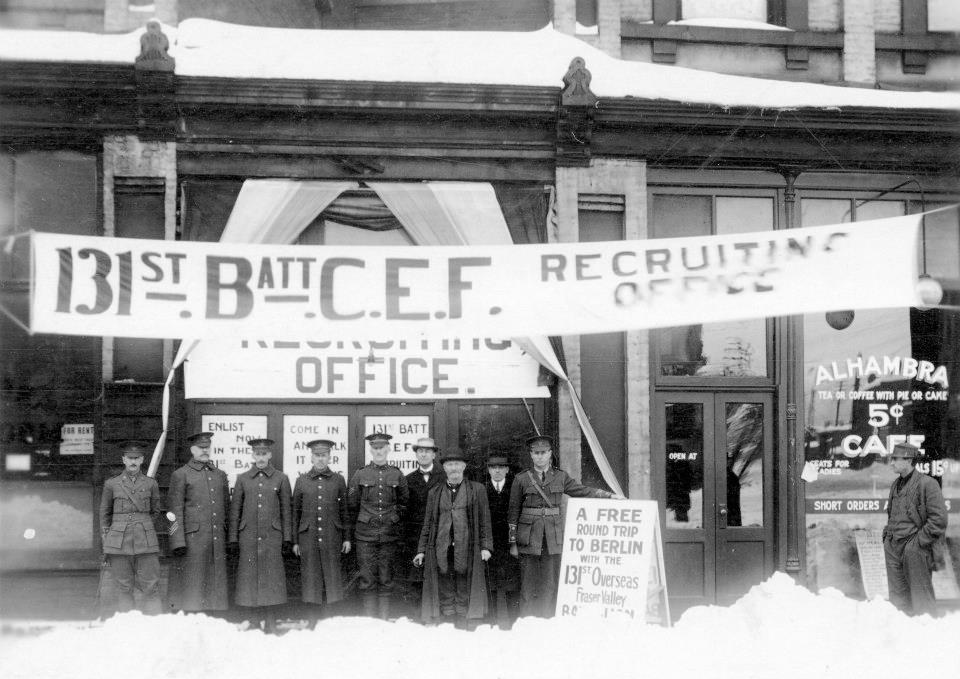 Soldiers sit on top of a truck while possibly celebrating Armistice, the end of the First World War, on November 11, 1918. The Royal Union Flag is being waved, which was the official flag of Canada at the time. 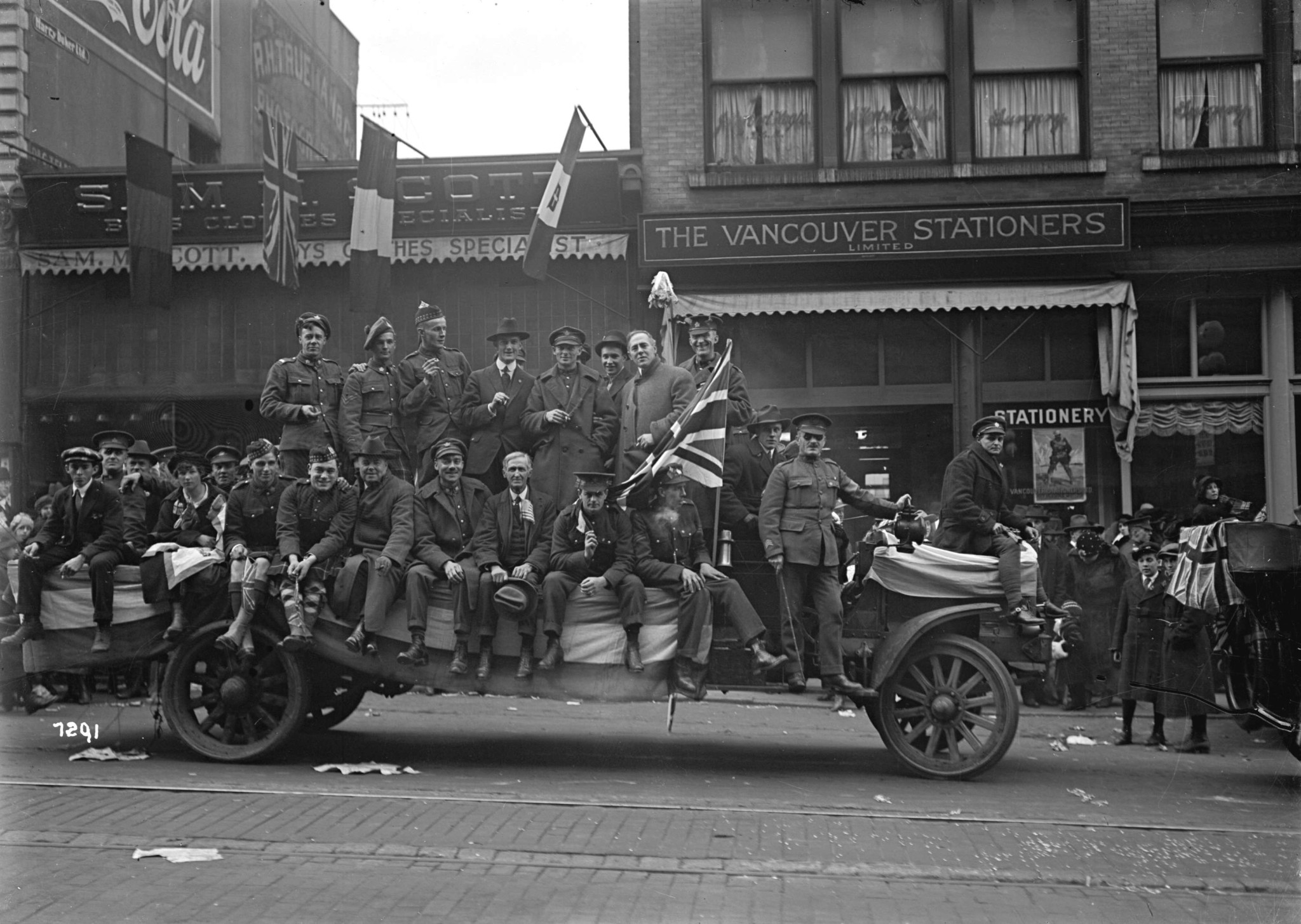 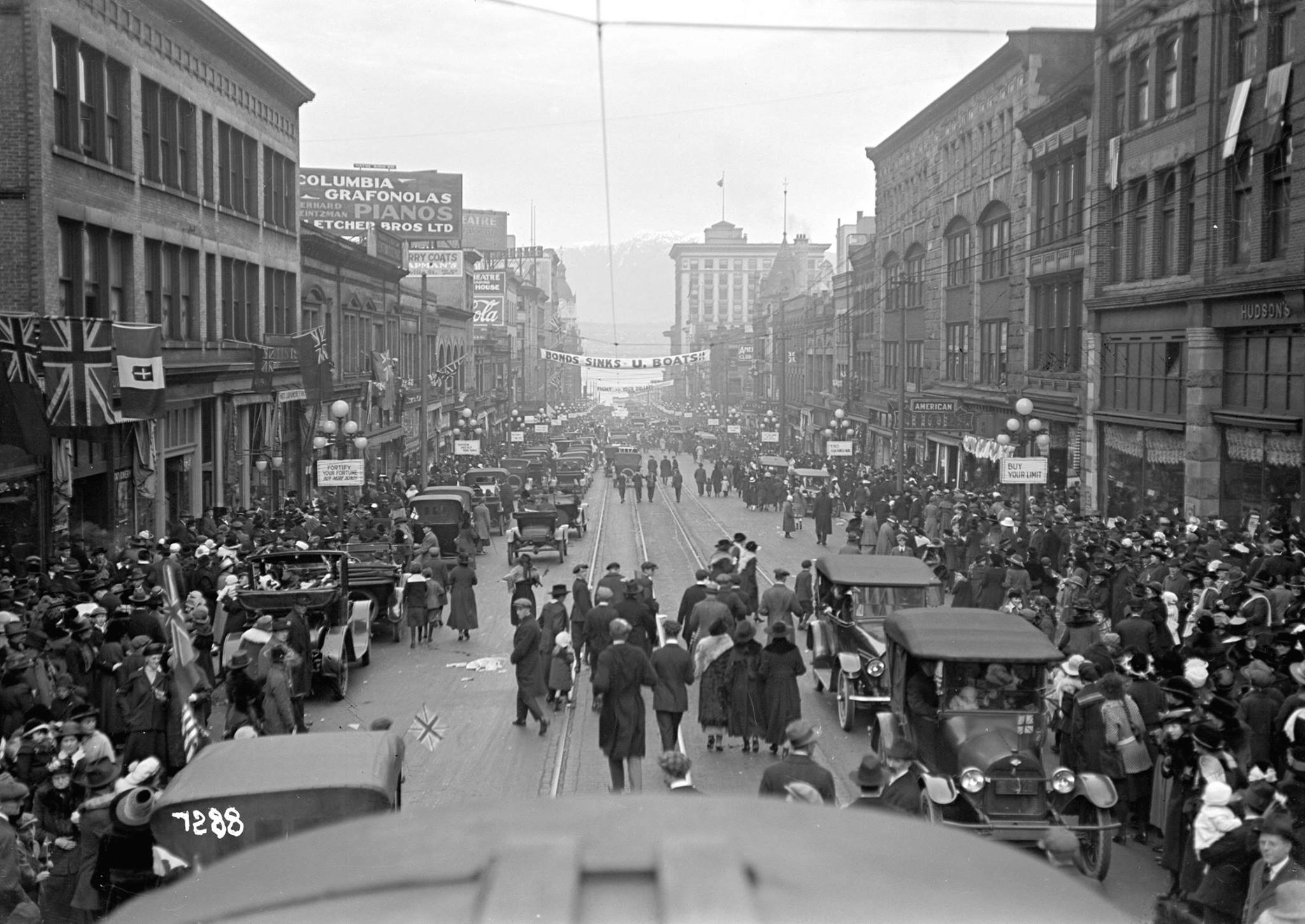 The Returned Soldiers Club, a group of WWI veterans, pose for a photograph in 1919. Many of the soldiers appear with obvious war amputations and wounds. Location: The Elysium Hotel at 1142 West Pender Street, current site of the Shorehill Building office tower. 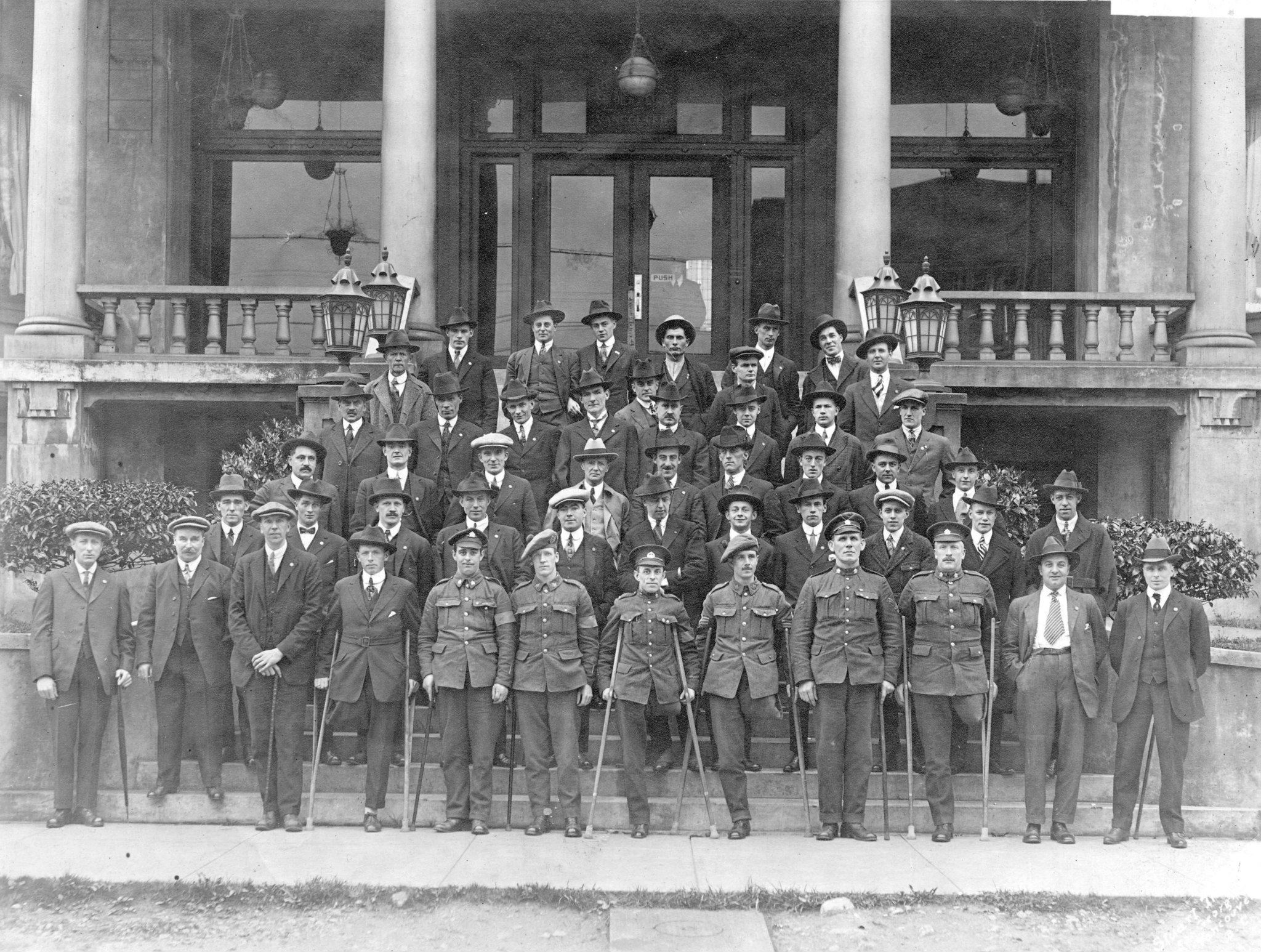 The most famous Canadian image during the Second World War – “Wait for me, Daddy!” – features a young boy chasing after his father marching with the The British Columbia Regiment, Duke of Connaught’s own rifles, down Eighth Street to a train in New Westminster, taken October 1, 1940.

Five-year-old Warren Bernard tugs away from his mother’s hand to reach out for his father, Private Jack Bernard. He eventually returned home safely at the end of the war, but he and his wife Bernice Bernard divorced. During that time, the photo was used extensively for war-bonds fundraising campaigns and it was also featured on Life magazine, making Warren Bernard the poster-child for Canada’s involvement in the war. 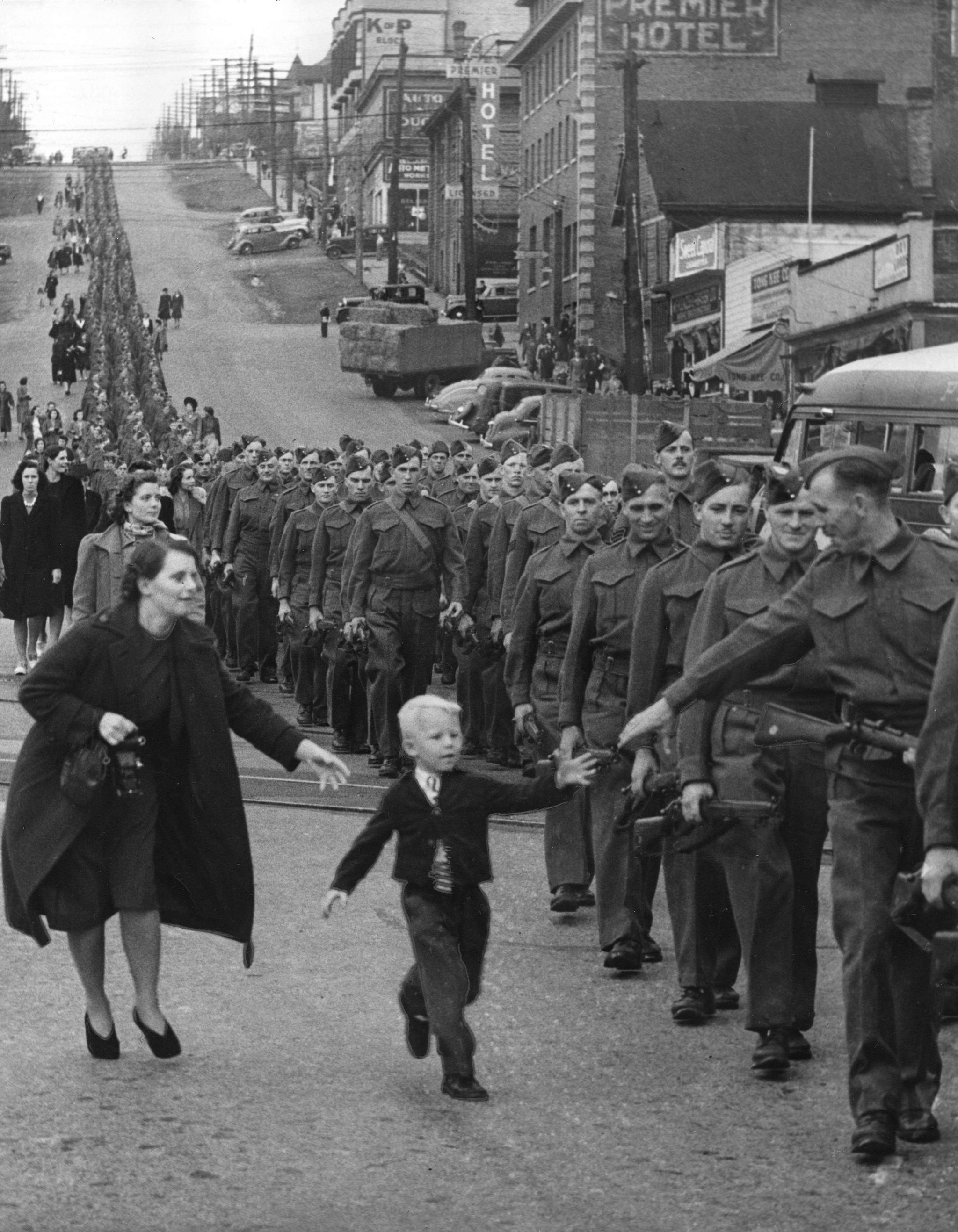 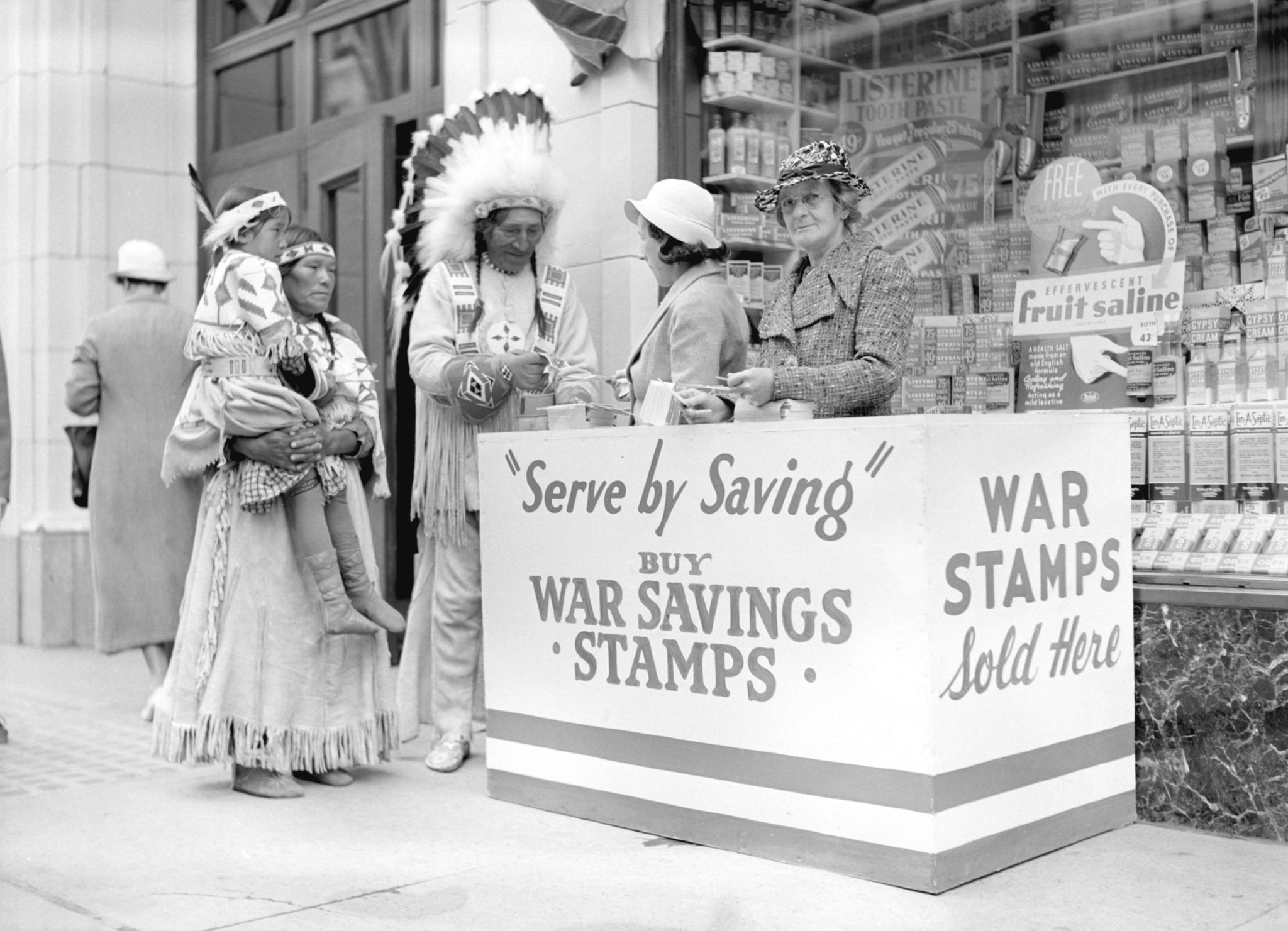 Troops say farewell to their loved ones as they embark on the train toward Europe at the start of the Second World War on April 14, 1942. 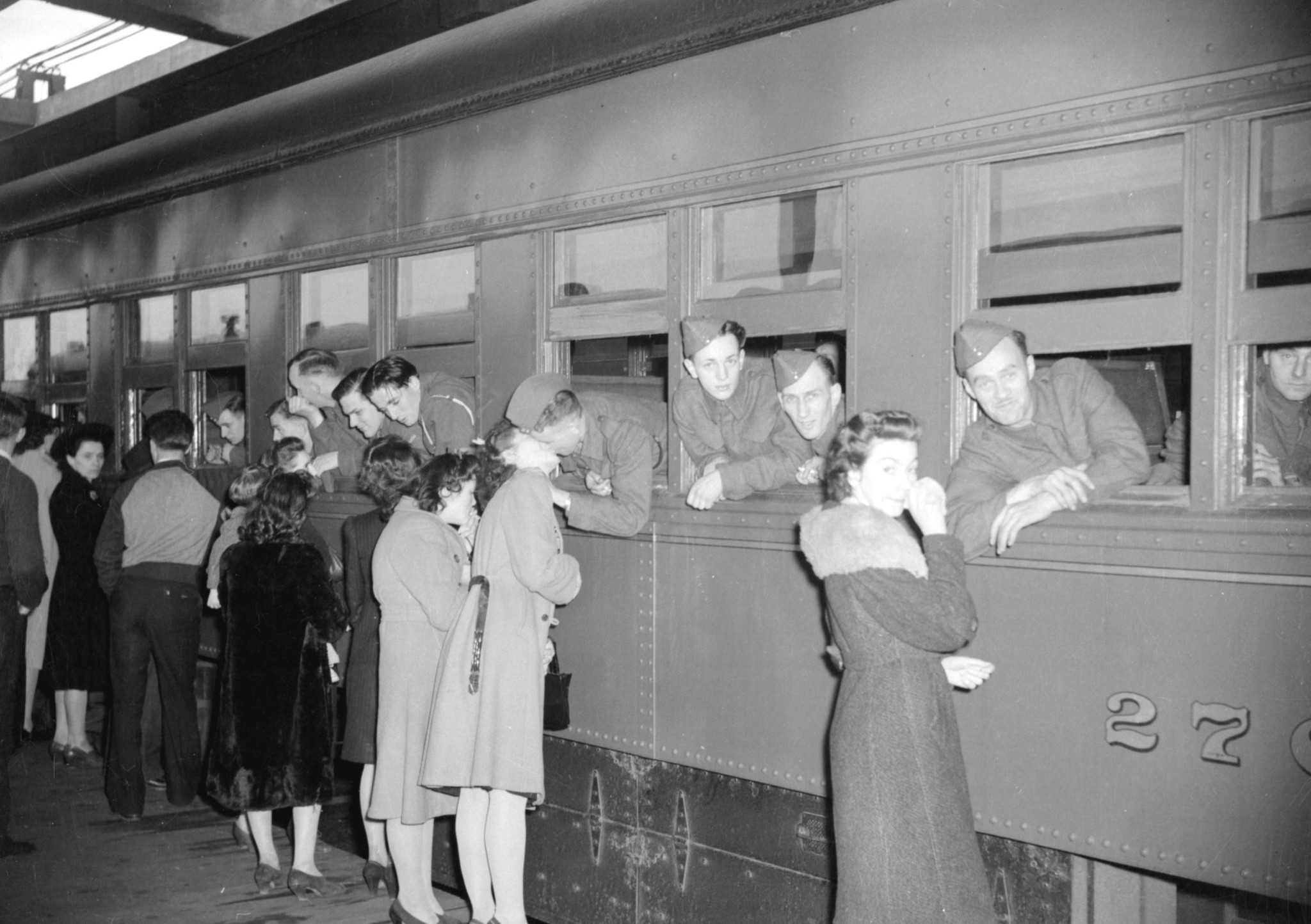 A father says goodbye to his wife and child while waiting to board a train on April 14, 1942. 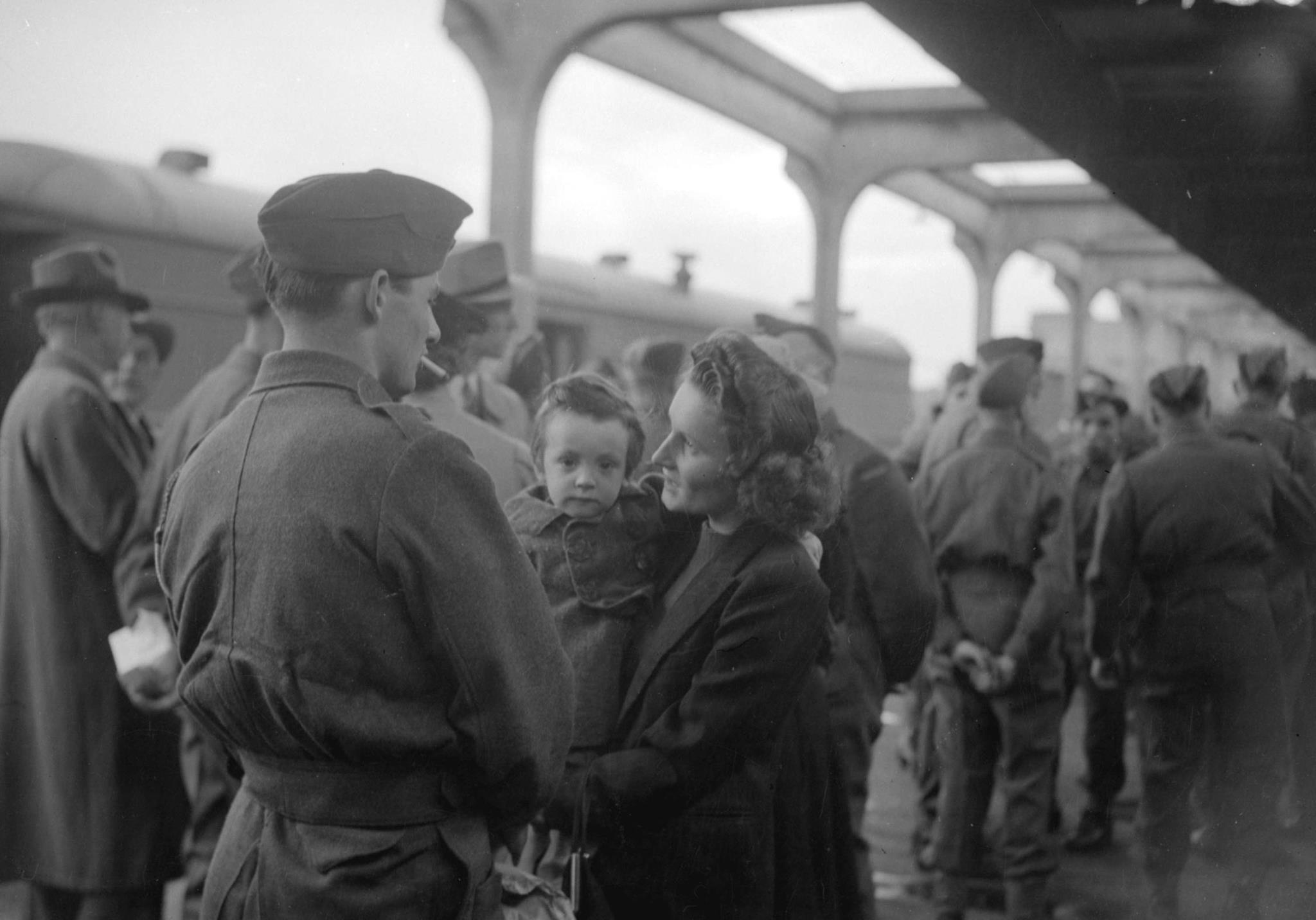 Troops await departure aboard a ship bound for the front lines in 1942. The Marine Building, still standing, soars in the background. Location: The now-demolished Pier B-C, current location of Canada Place. 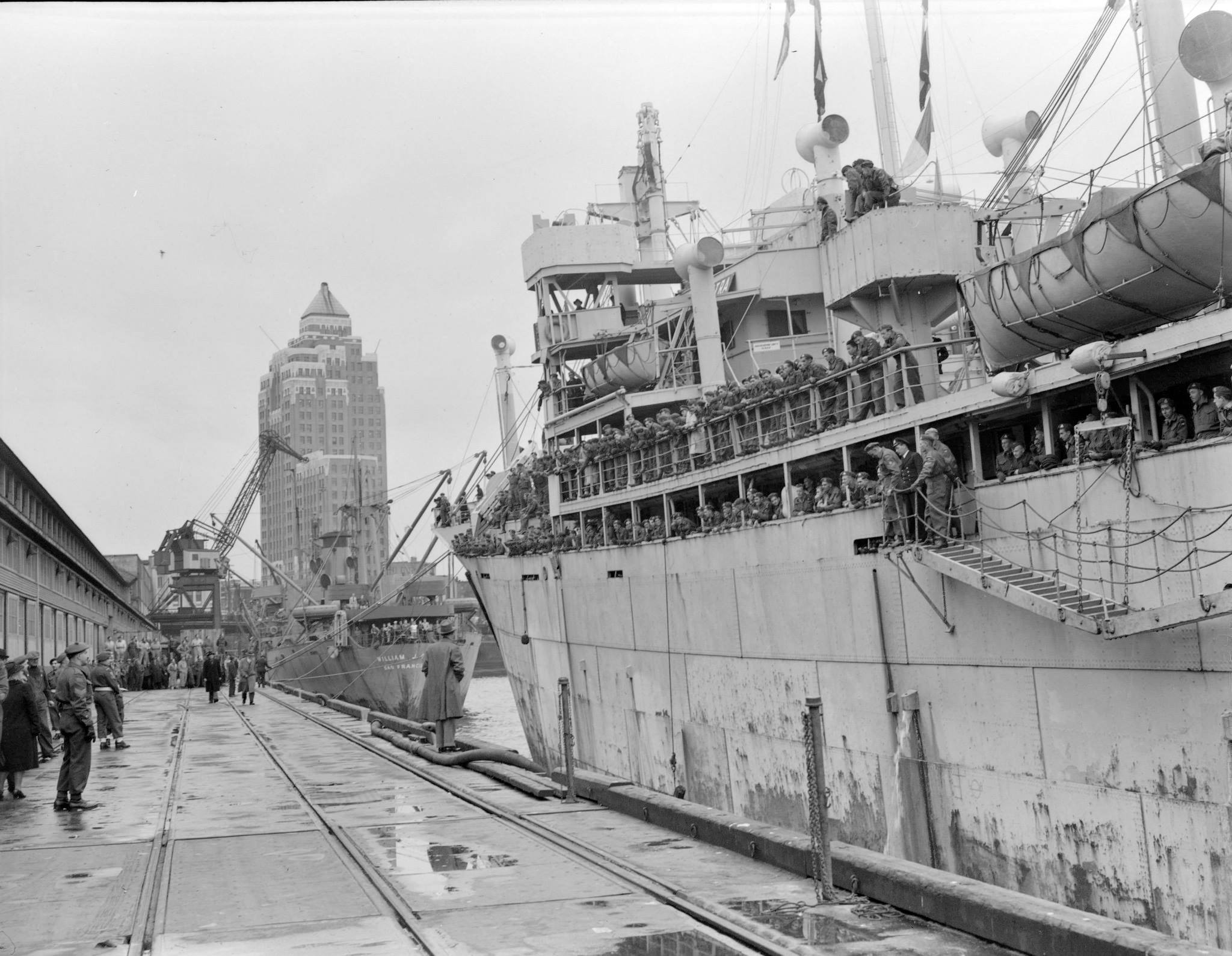 A Navy sailor gives much-needed blood to the Red Cross on board the H.M.C.S. Warrior sometime during World War 2. 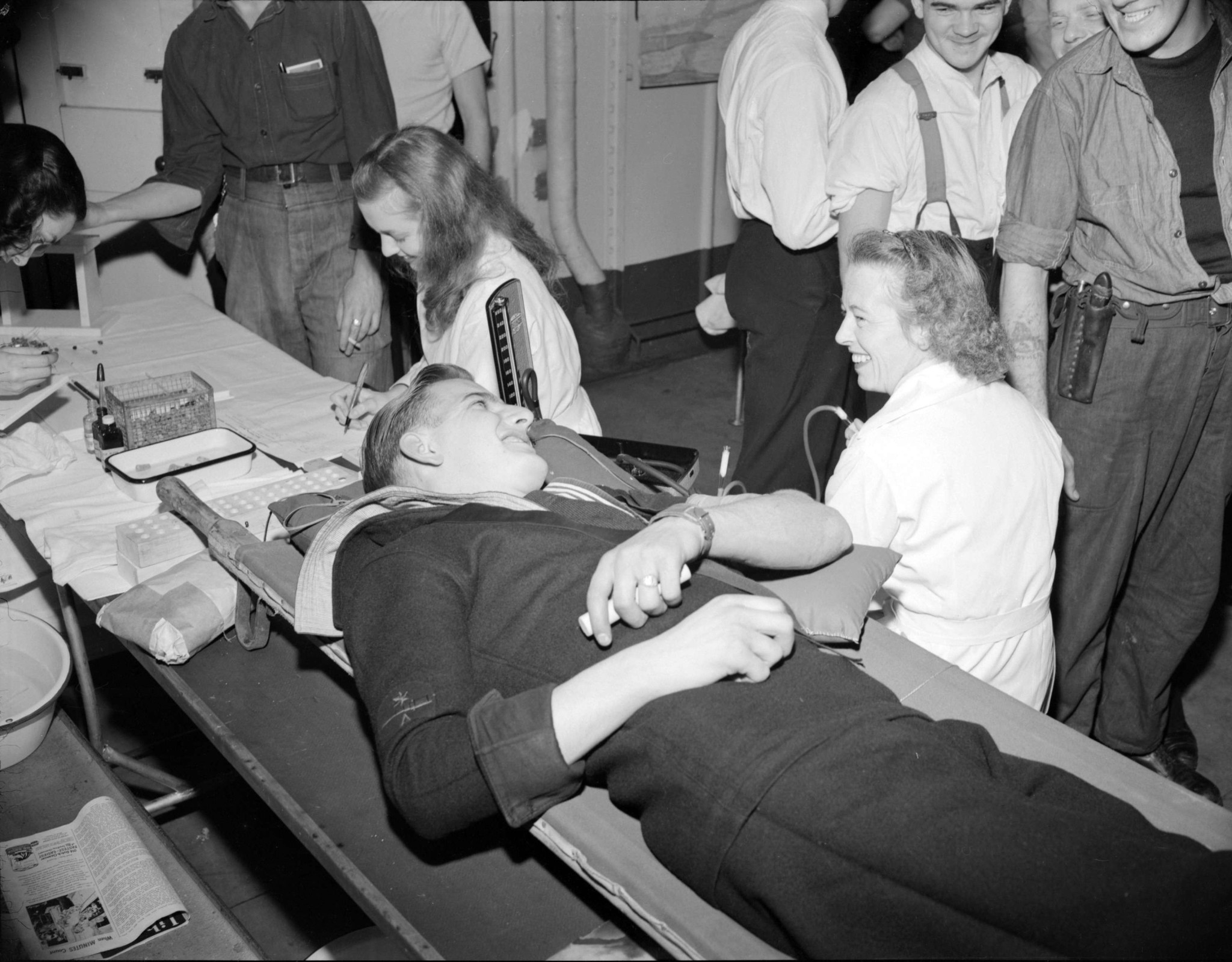 Inside a Japanese internment camp located at Hastings Park in 1942. The Japanese Canadians inside these camps lived in cold and unsanitary conditions. They were not legally allowed to work or attend school outside the camps and had all their property, including homes and fishing boats, confiscated. The government later liquidated all their belongings at auction, such as farm land, homes, clothing, fishing boats, bank deposits, stocks and bonds.

Following the war, thousands were deported back to ravaged Japan, a country to which many had never even visited. It wasn’t until 1949 that Japanese Canadians were without restrictions and 1950 that the government repaid $1.5 million in lost property to some 1,400 residents. 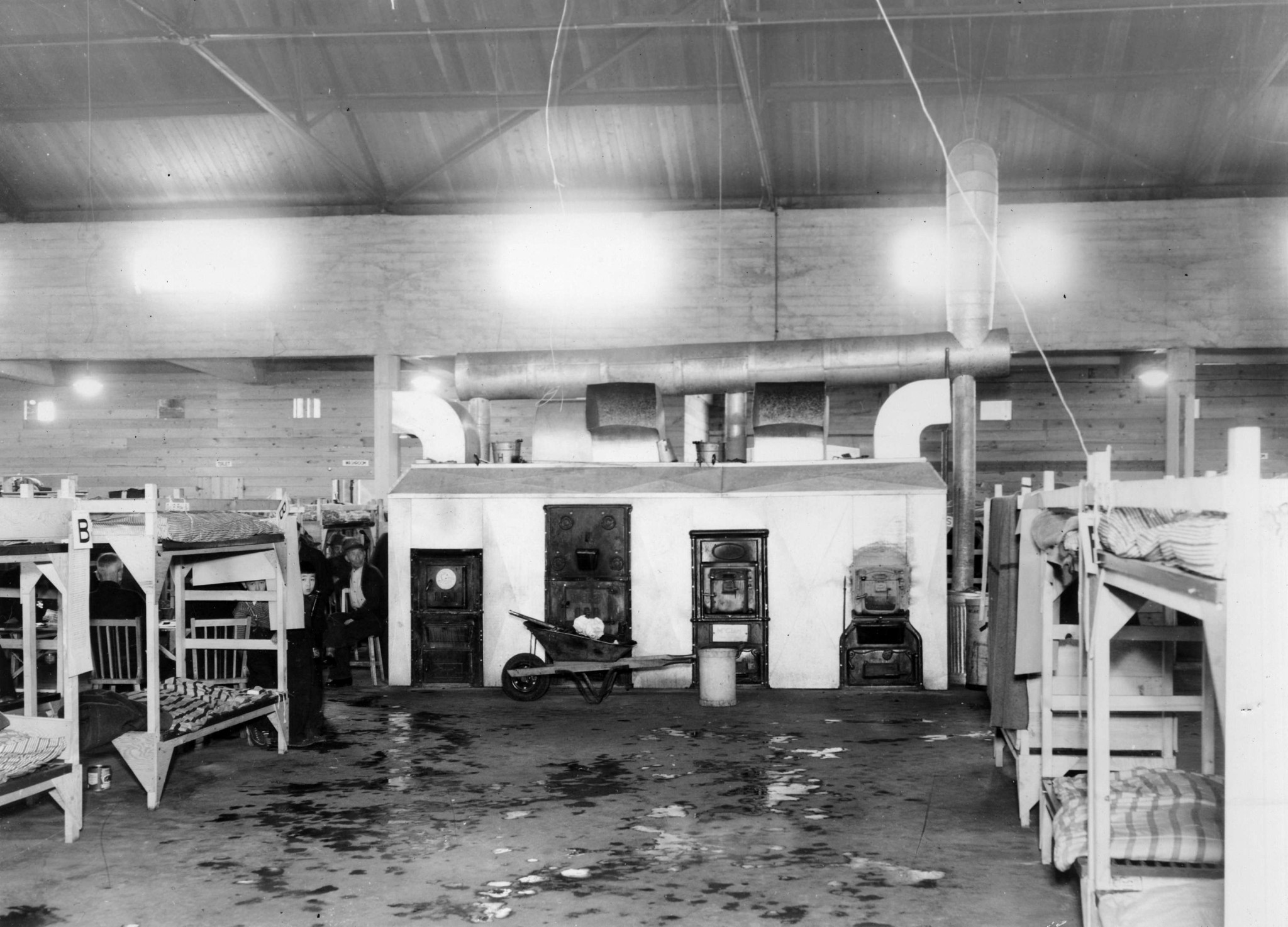 A notice issued from the B.C. Securties Commission to all people of Japanese ethnic origin residing in Vancouver during the war.

“War Ends in Europe”, “Germany Surrenders” – A news vendor sells copies of the Vancouver News-Herald on the morning of May 7, 1945,  as news of the ceasefire reaches Canada. The next day, May 8, 1945 is officially known as Victory in Europe (V.E.) Day. 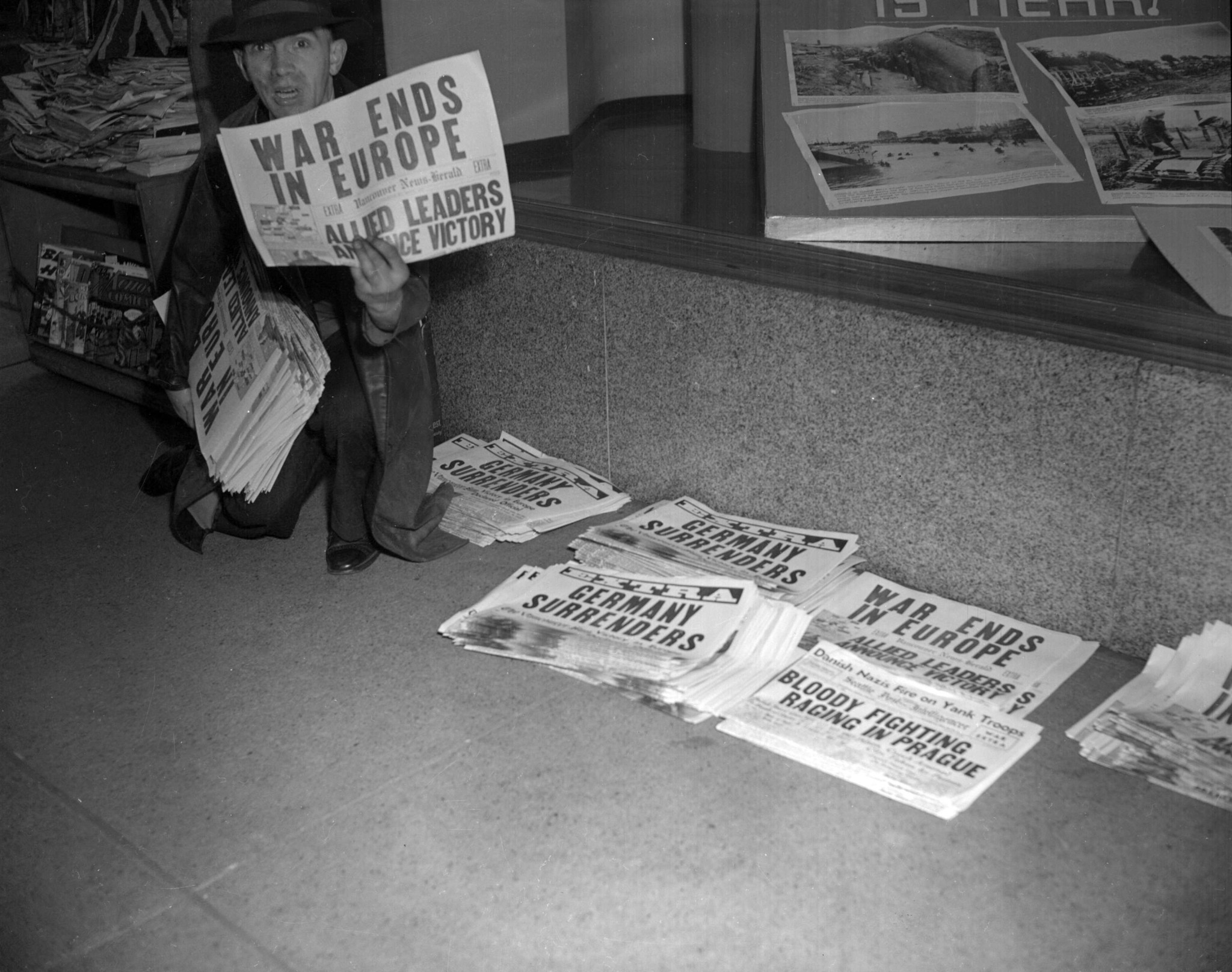 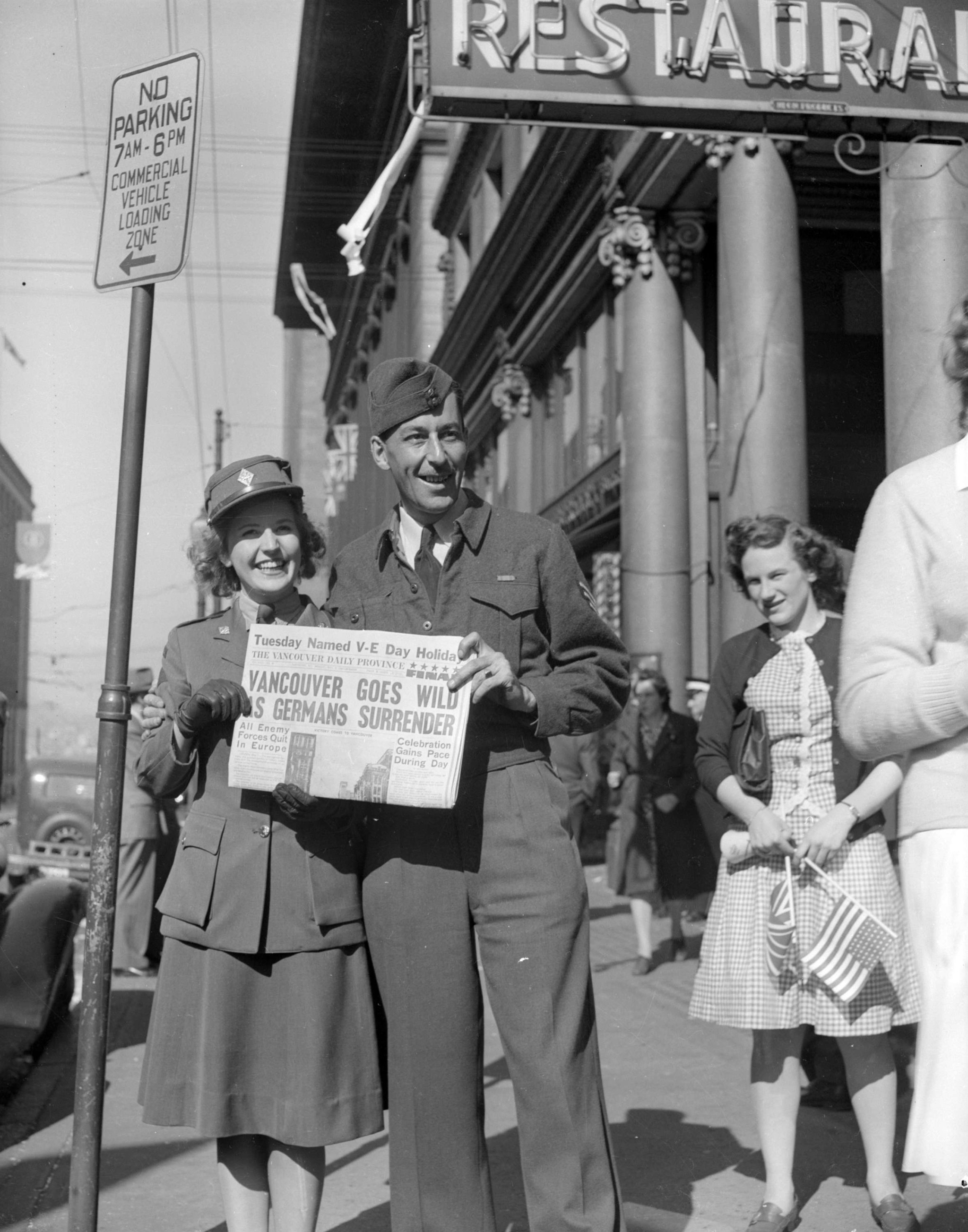 The city comes alive to rejoice the end of the war for V.E. Day celebrations. Location: Hastings Street at Granville. 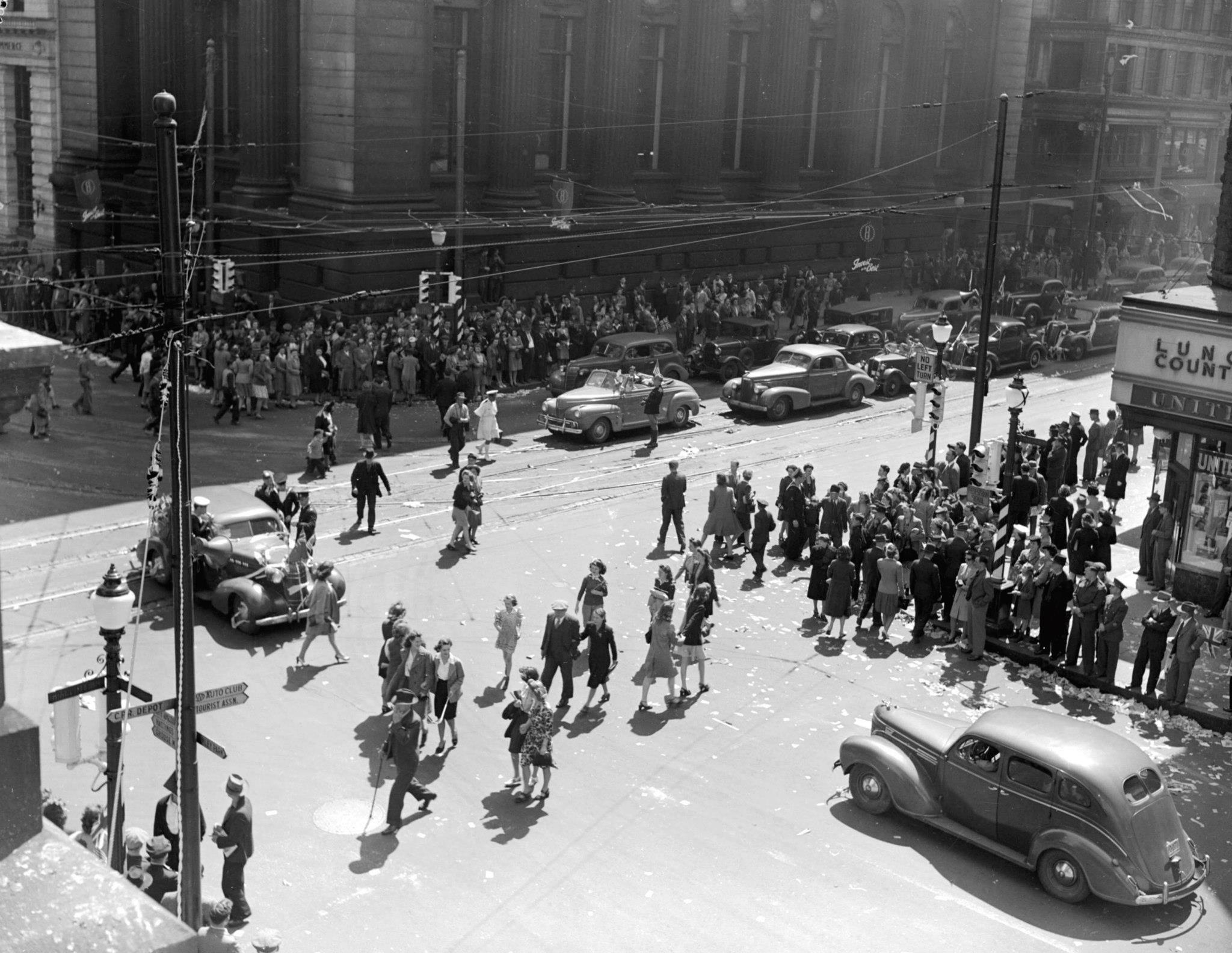 An aerial view of V.E. Day celebrations, including plenty of confetti, on May 8, 1945. Location: Hastings Street. 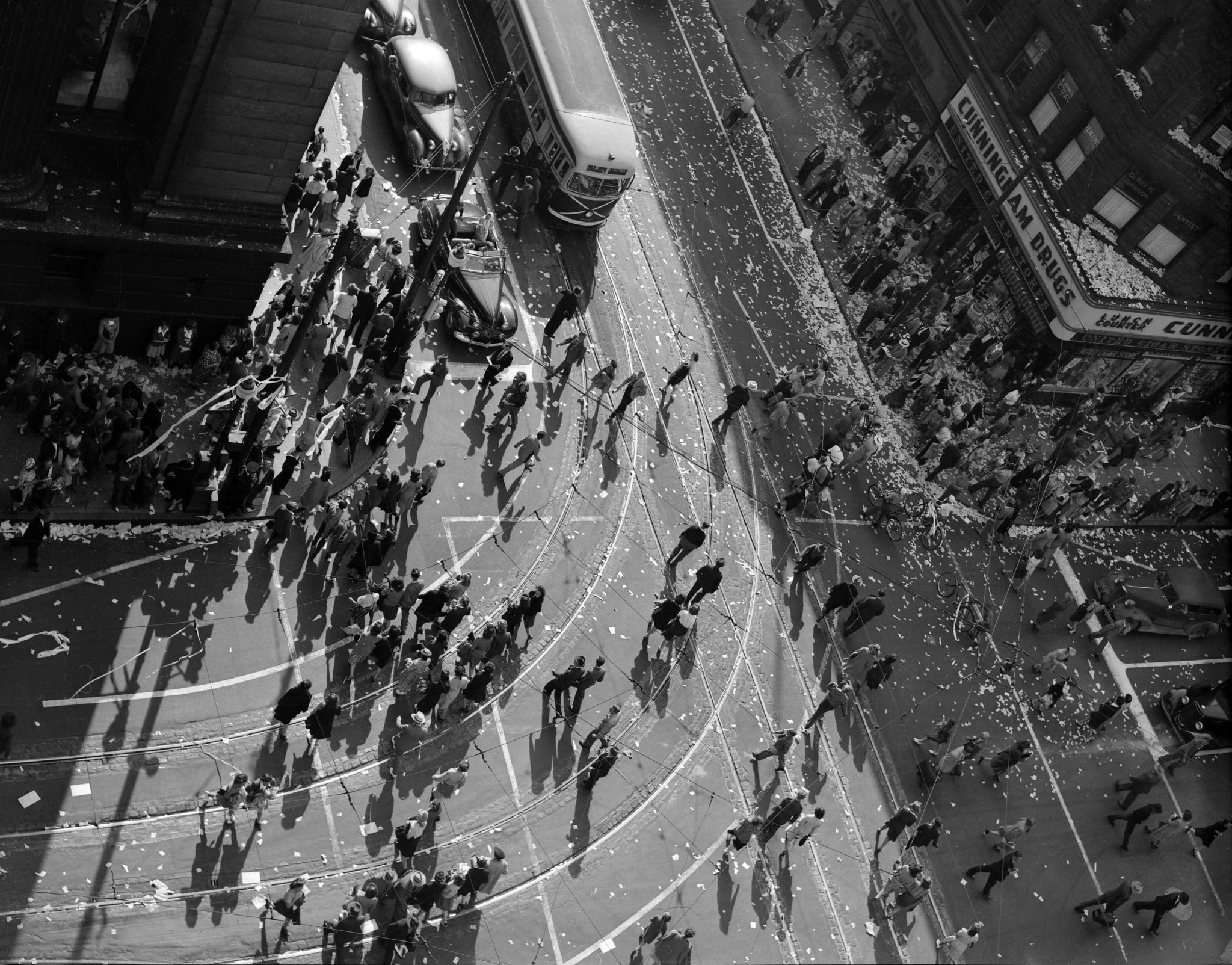 Leftover revelry lines the streets after V.E. Day celebrations conclude. But the war is not over yet; the battle in the Pacific against Japan rages on. Location: Howe Street, looking north from Pender. 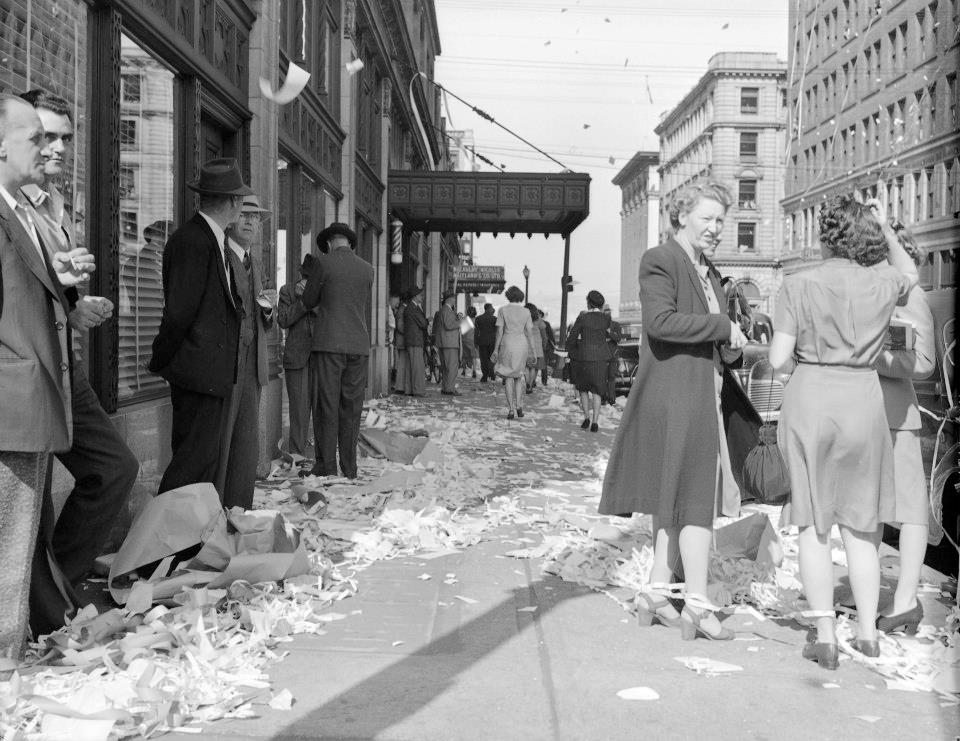 On August 14, 1945, Japan officially surrendered to the allies, ending the Asia-Pacific theatre of the Second World War, and the war as a whole – known as Victory in Japan (V.J.) Day. Vancouver’s Chinese community celebrated the win in the streets of Chinatown after a bloody and violent Japanese occupation of China. 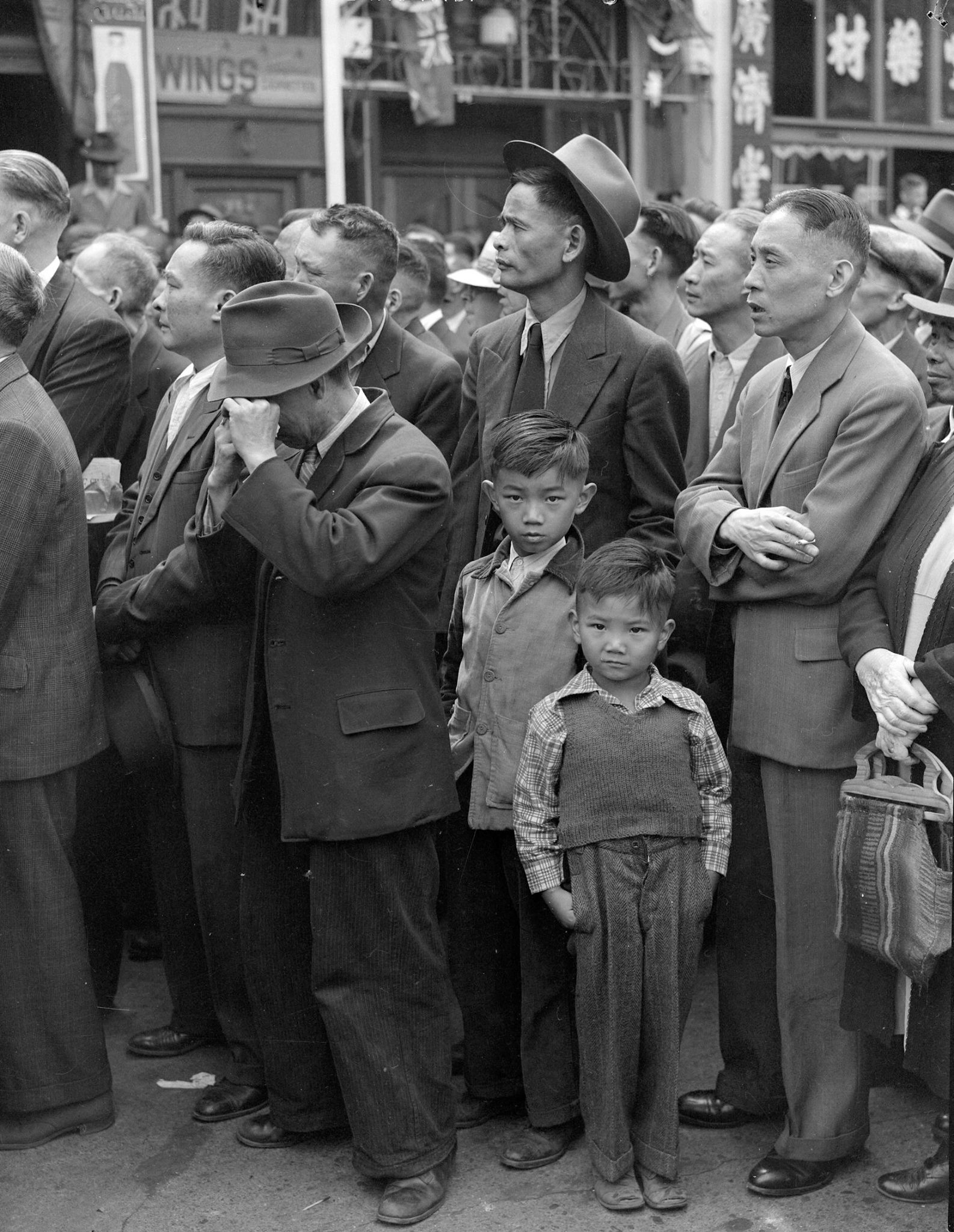 The Vancouver Chinese community marches through Chinatown during the V.J. Day Chinese Dragon Parade on August 14, 1945. 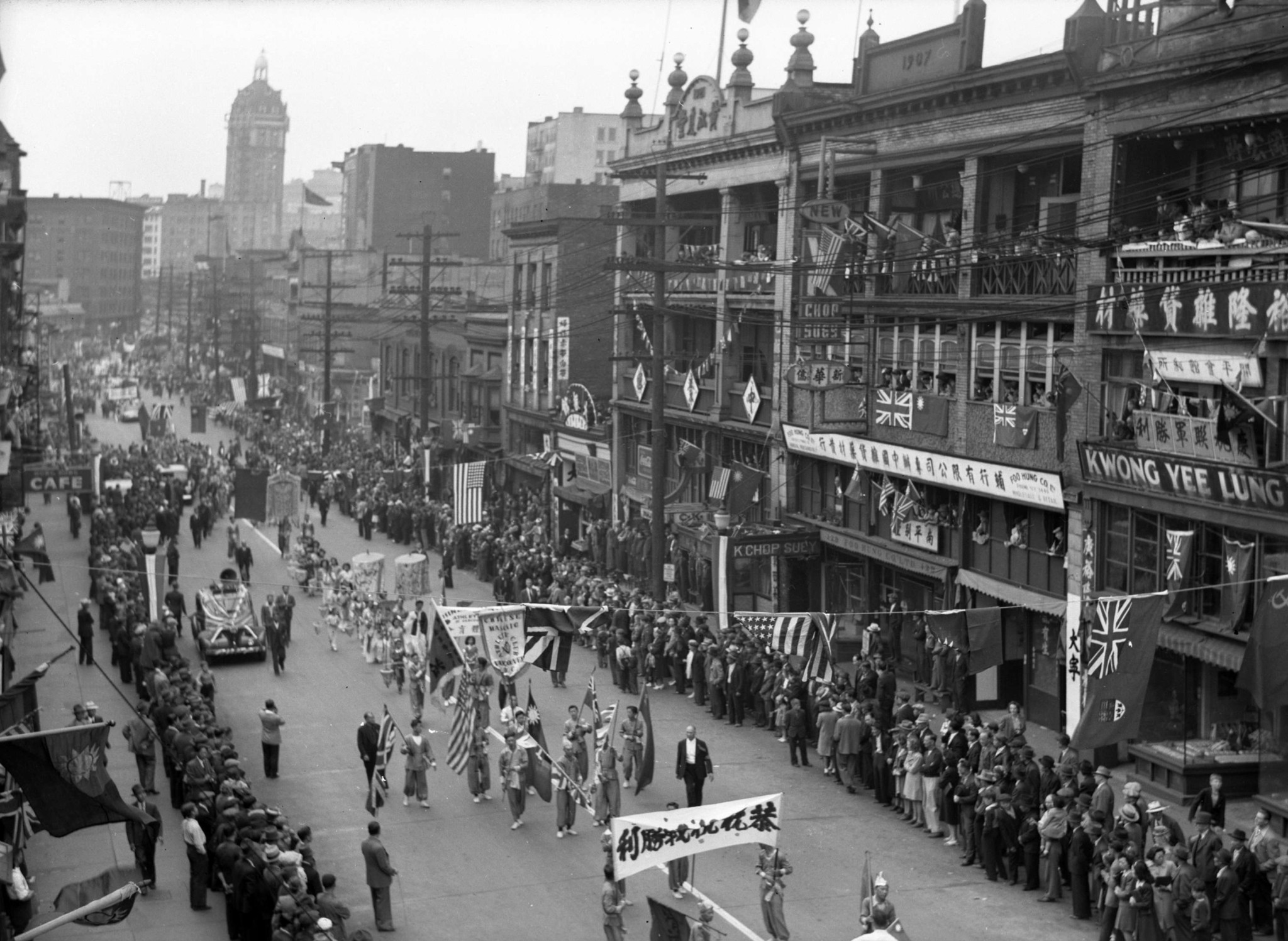 The front page of the Vancouver Sun on August 14, 1945 announcing the end of the Second World War. 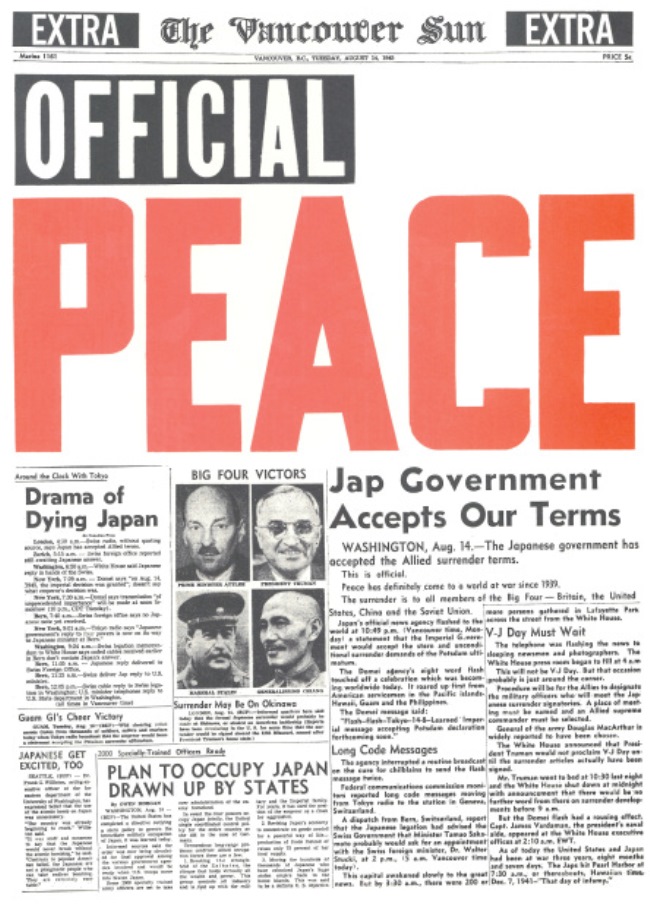