If a 1960s proposal by the City of Vancouver’s Planning Department had its way, Granville Street, once known as Granville Mall, would be closed to traffic as a pedestrian mall and include a carousel, café and a fish pond.

Sketches stored in the City of Vancouver Archives show three views of the proposed Mall, the first looking south up Granville toward Georgia Street from the current location of H&M at Pacific Centre.

The image shows the closed-off street, pedestrians, a children’s play area (including a carousel), an outdoor café and the west side of the Hudson Bay building. 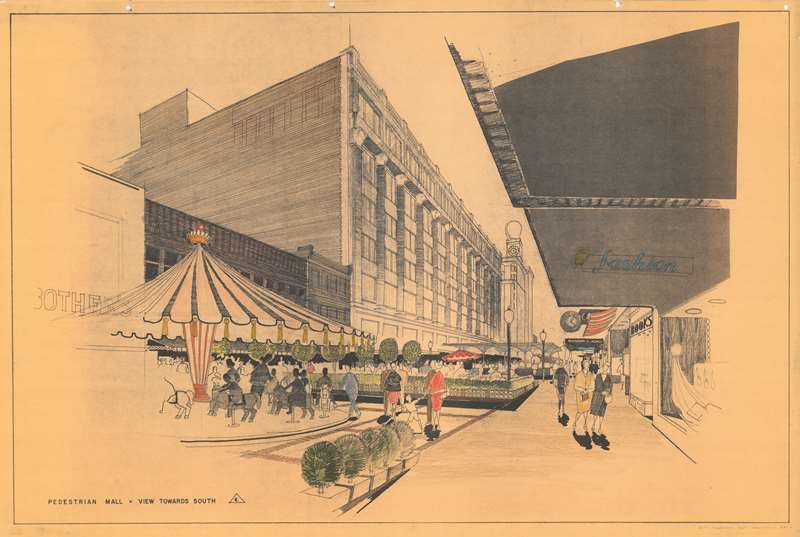 The second sketch is a wider view of the proposed Granville Mall looking south from Dunsmuir toward Georgia St., with the Vancouver Block building in the background. It shows the old Colonial Theatre in the foreground along with Zellers, Woolworths and the Hudson Bay Company.

There appears to be a fountain, a tented outdoor café and a carousel along the Mall. 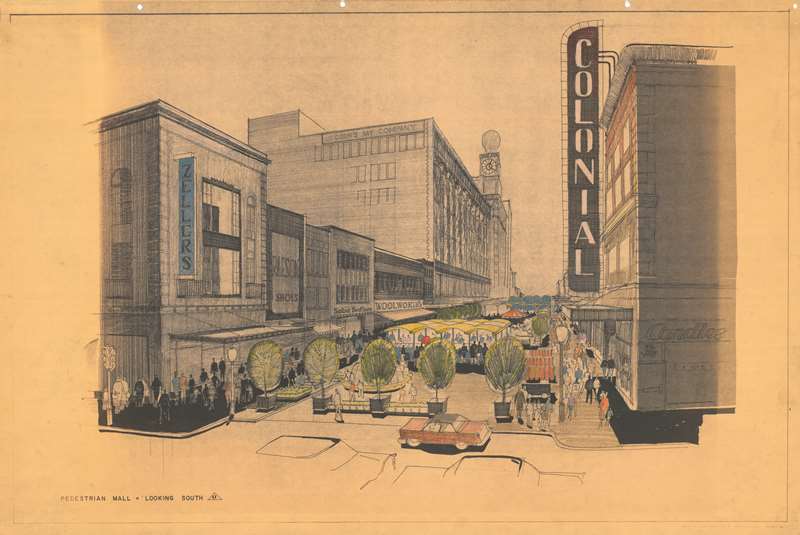 The third sketch is a bird’s-eye architectural drawing of the three stages included in the drawing, the first being a four-lane street for through-traffic only with a parking lane added along with trees and benches, moveable stands and a sidewalk café.

The second development stage is most similar to what is currently in place on Granville Street, showing a narrowed two-lane street for bus traffic only and widened sidewalks. The pedestrian area would be limited to sidewalks with more seating, foliage and dining.

In the third development stage, the street would be completely closed off to traffic with a sculpture fountain on the Dunsmuir end, next to an outdoor market (bazar) and a refreshments patio. The children’s play area and merry-go-round would occur mid-span just down from a sidewalk terrace and another refreshment kiosk. At the sound end of the Mall would have been a large multi-level fish pond and fountain pool.

The final drawing shows a pedestrian mall decorated with dozens of trees and shrubs and multiple gathering places for community interaction. 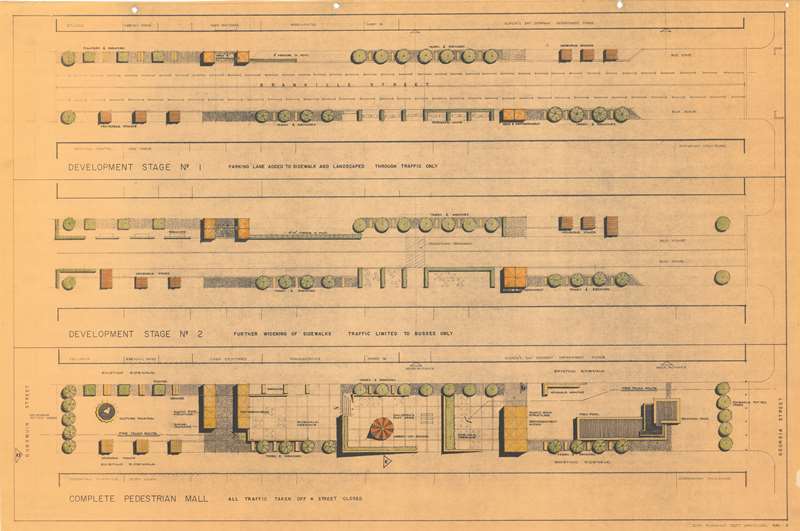 In the 1950s and 60s, Granville Street was the business and entertainment mecca of Vancouver. The street was full of theatres, arcades, restaurants and neon signs, attracting thousands of tourists a year.

Before 1974, there were four lanes of traffic going both north and south. In that year, however, Granville Street north of Nelson was turned into a pedestrian mall, though its incarnation was different than the 1960 proposal hoped. 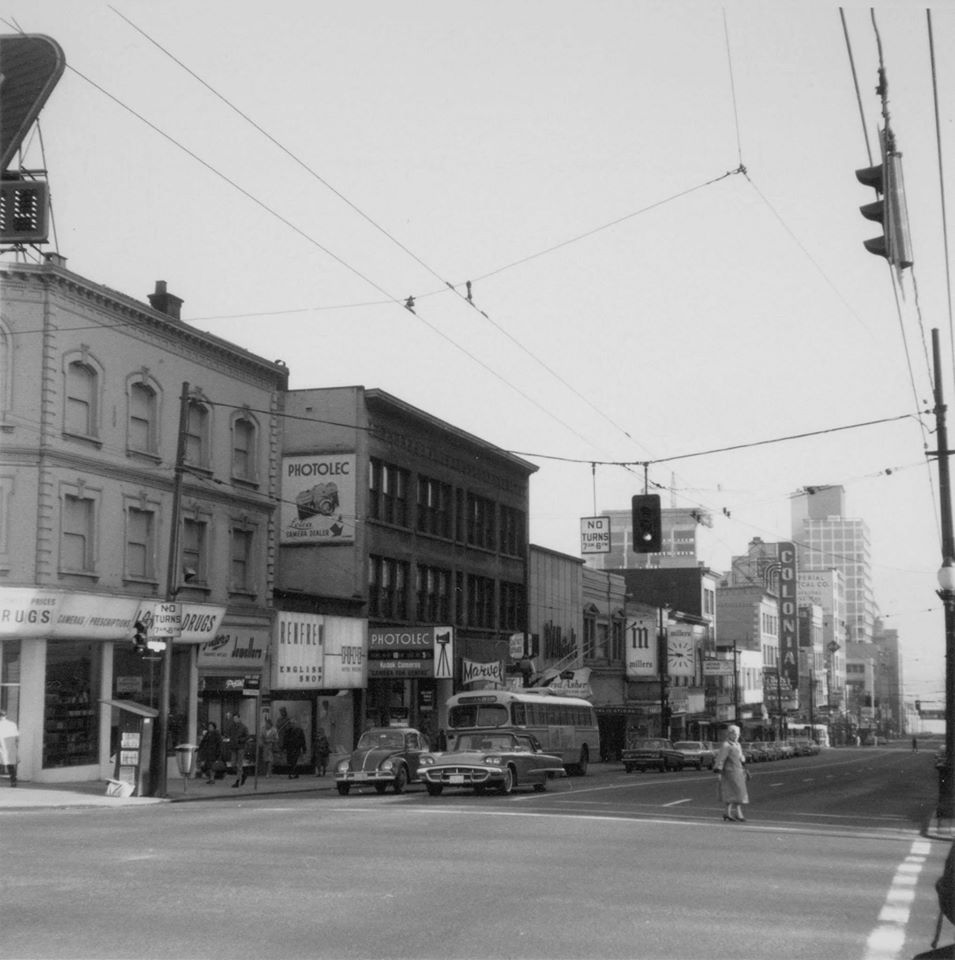 Granville Street looking north from Georgia toward Dunsmuir in 1967, before turning into a pedestrian mall in 1974. 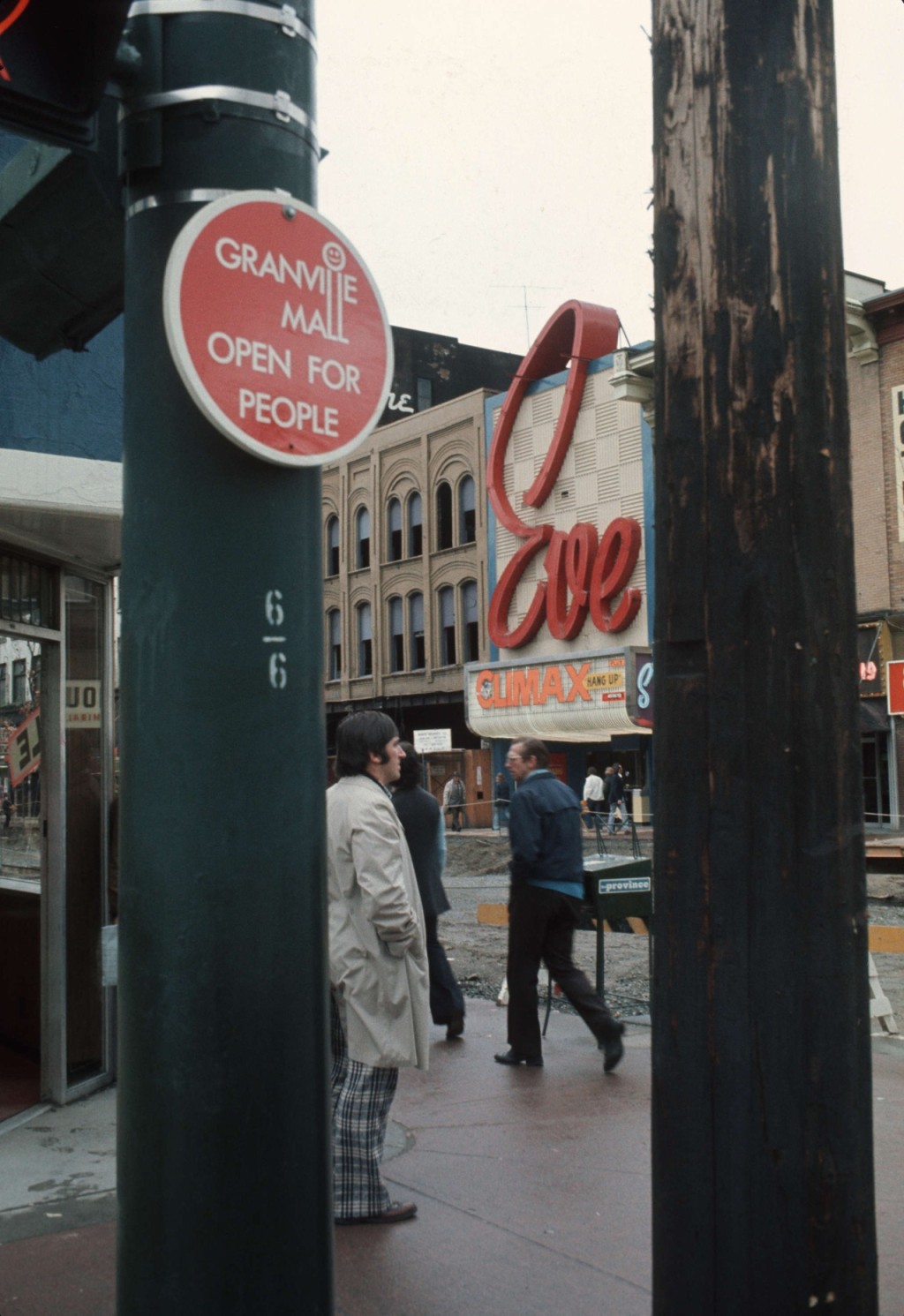 Construction on Granville Mall in 1974 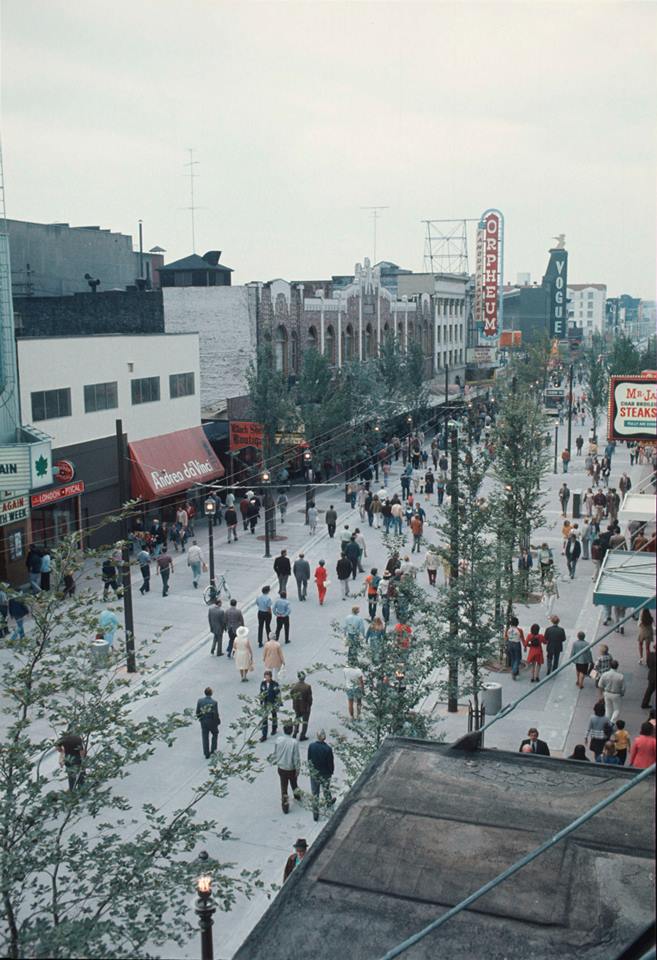 The Granville pedestrian mall in 1974, taken from southwest corner of Granville and Robson.

The car-free experiment only lasted until 1988 and likely failed due to the opening of Pacific Centre Mall, lack of public transit, and low residential population in downtown. The street was eventually reopened to vehicle traffic at the end of the decade.

But in April 2006, the section between Hastings and Robson Street was closed once again for construction of the Canada Line. That spring, the City decided to implement a redesign of the mall once construction finished. 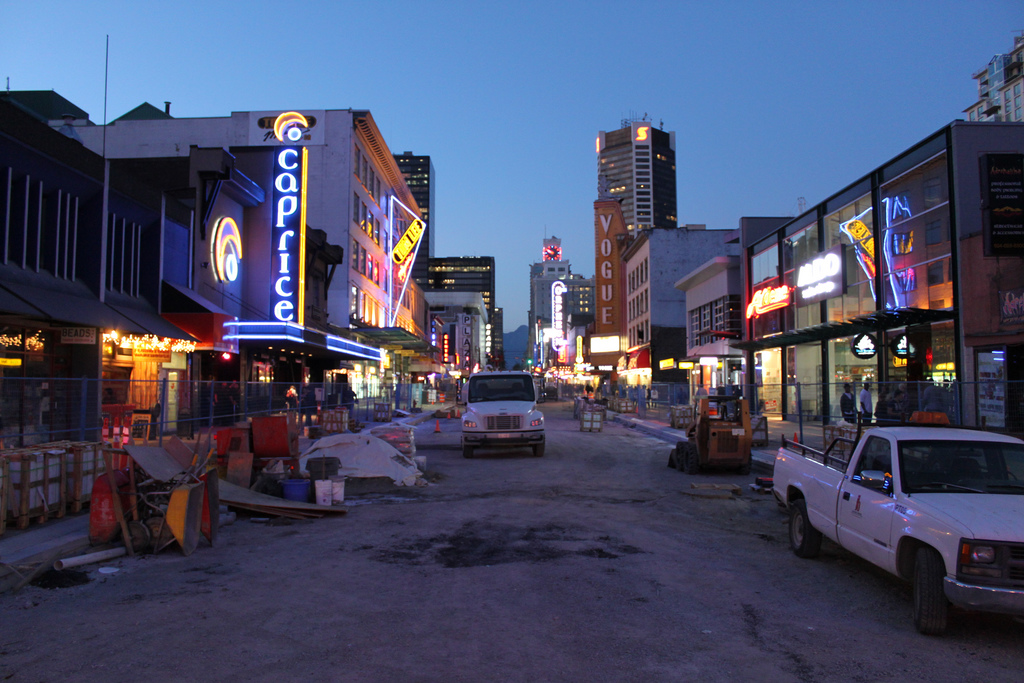 Since, the City of Vancouver has spent over $20 million to redevelop Granville Street into a more pedestrian-friendly city centre, adding enhanced lighting, custom benches and bike racks. The majority of the street is used for public transit only and portions of the road are closed several times a year for special events, such as VIVA Vancouver.

Following the success of the Olympic Games, the city closed five blocks of Granville Street to traffic in summer 2010 for the Rediscover Granville project. To much fan fare, artificial turf and extra seating was installed. 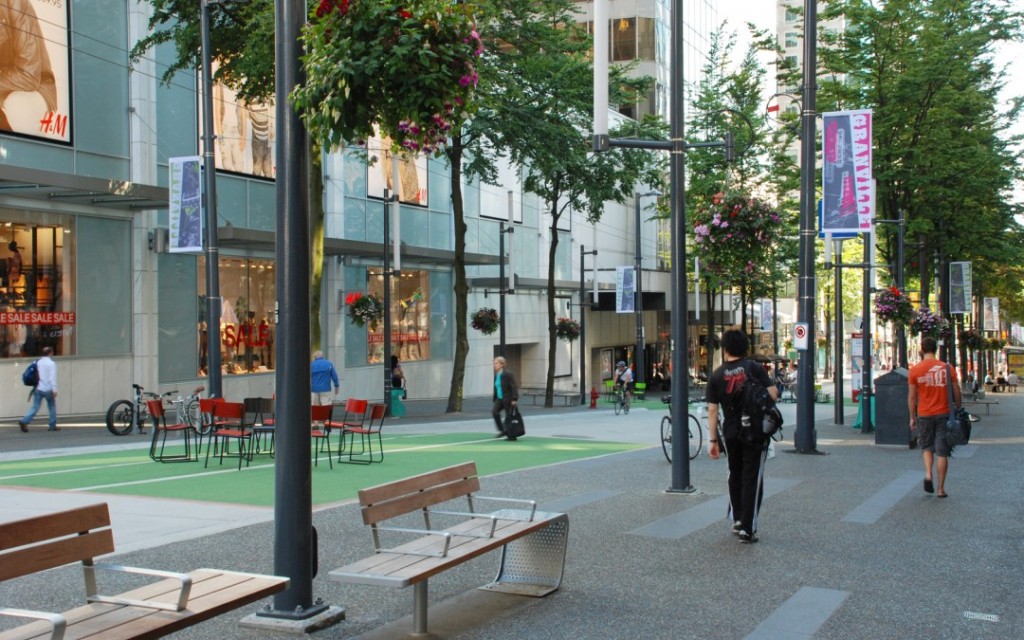 From the 1960s to today, Granville Street has undergone changes that have impacted the culture of the city greatly. From hundreds of thousands crowding the streets after the Olympic Gold Medal Game in 2010 to mass chaos during the 2011 Stanley Cup Riot, Granville Street proves to be the community epicenter of Vancouver again and again.

The City has experimented with traffic and pedestrian usage on the street for decades, trying to find the right blend of business logistics and creative community planning. Today, the street is a flexible hyrbid of the two, closing to traffic on special occasions yet boasting a successful retail market with leading anchors like Pacific Centre, Orpheum Theatre and the coming-soon Nordstrom department store.

While the 1960s City of Vancouver Planning Department didn’t get quite what they wanted, Granville Street’s continuously changing existence leaves little doubt their hope for a one-block pedestrian mall will ever be written off entirely. 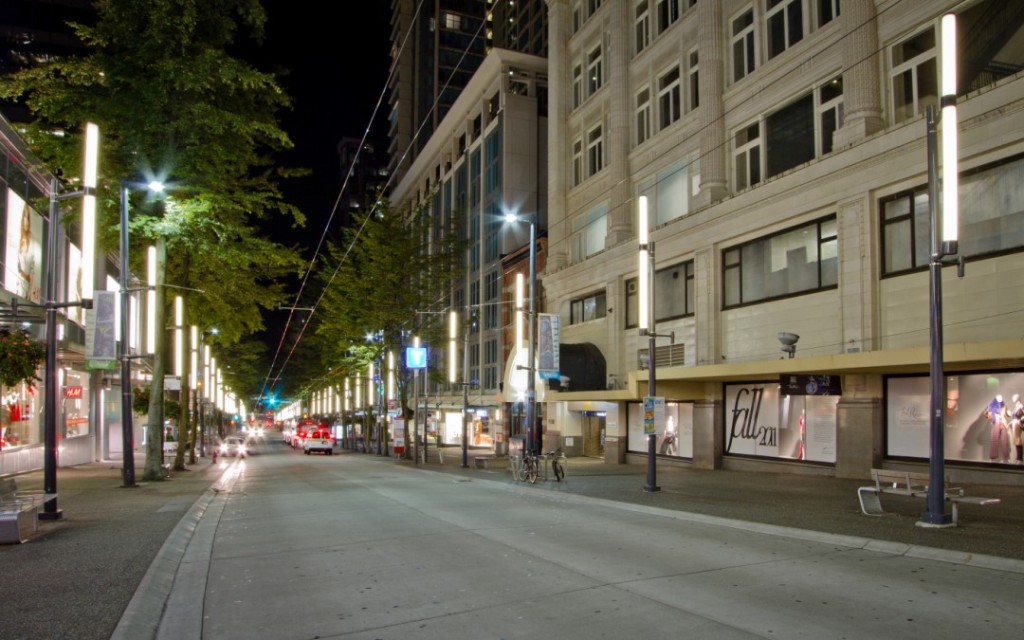 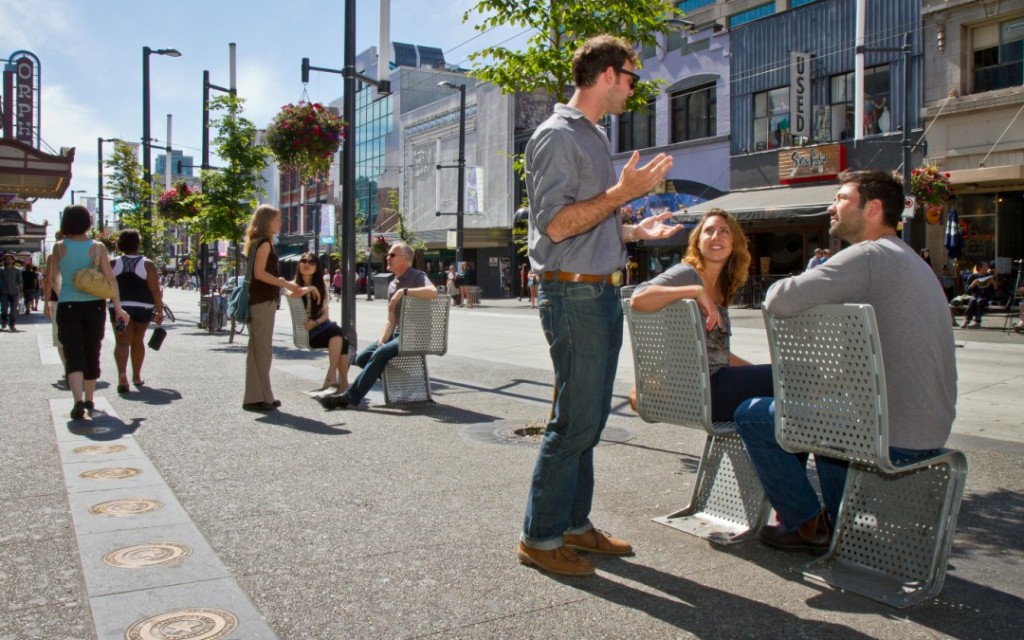