It’s been a long, long journey, but Vikram Vij’s new Cambie Street restaurant is readying to open in early December.

Vij’s former office space on Cambie at 15th had been destined for some time to be turned into a new signature restaurant space (back to 2010), however the transformation has stretched months beyond its initially-anticipated scope (we were hoping for Summer 2015). However, with the final touches being put in place, the restaurant, in the building nicknamed “Vij’s Lantern,” is looking to open its doors in early to mid-December.

A tremendous amount of attention to detail is at work in the design of Vij’s. A gently sloping ramp leads to a front door that winks with the secrecy of a speakeasy, but offers cozy covered comfort to those who line up to get an early seating.

Those who can be seated right away are whisked up a few steps past the host stand to the dining area, while those who have a wait can do so in the 40-seat lounge. The lounge itself is a bit like theatre in the round. At the far end, a wall tiled in a deep, bright green wraps the open kitchen, where in one corner a window gives patrons a clear view of the tandoor oven station, where they’ll see the naan being made.

“We want to showcase what we are doing,” says Vij proudly of his new space. Above the room hangs 6000 handmade Chai bowls, made in Indian by a potter who, true to his native country’s sensibilities, couldn’t fathom how something so functional as a chai cup could need a hole in the bottom and be used as decoration. 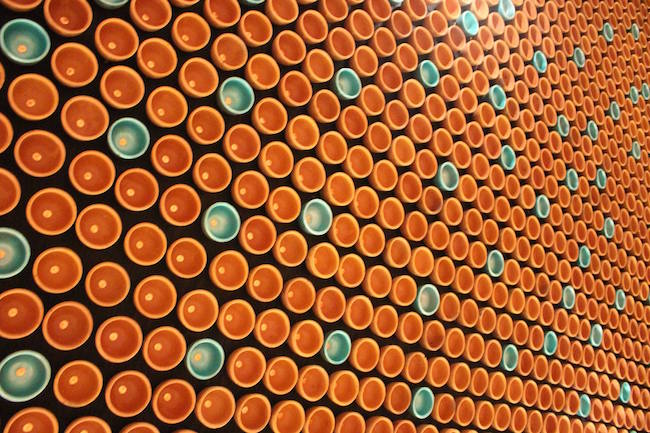 The room exudes a welcoming warmth, and a vibe Vij describes as “very modern Indian,” though it also has a retro-chic feel, and a smart use of space, light, mirrors, and shapes to make it feel far more expansive. The floor is made with salvaged mesquite ends, and the custom petite chairs have beautiful detailed touches, like an elephant imprint on the underside and a floral motif akin to a henna tattoo on its back.

The bar is also a showpiece, though it will not offer seating, but instead a clear view of the art of drink-making.

“I want the bar to get as much attention as the cooking does,” says Vij, who promises some exciting soon-to-be-revealed exclusives on the cocktail menu, which is being prepared by Vancouver barman Jay Jones.

The food will be the same menu at Vij’s (which will continue on on as-needed basis for large party overflow from its successor), though the kitchen set-up is, by necessity, a bit different.

“We want to do the food the same way, same pricing,” elaborates Vij.

Plans to transform the original Vij’s on West 11th into Mian Bawarchi, incidentally, are on hold for now, though that remains the long-term plan. 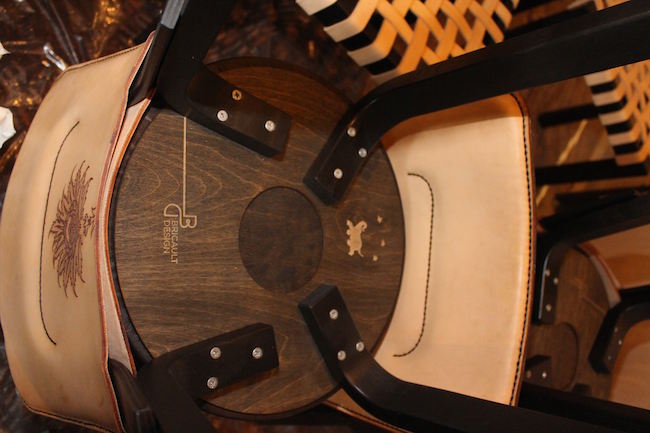 Since winter is upon Vancouver, the impressive upstairs deck-style patio will have to wait until spring to get put to use, however its scope is evident from the street below; the building is flanked by massive pale red metal mesh panels, spring-loaded to account for expansion and contract in the elements so that they always remain rigid. Those panels crown the rooftop deck, and will be anchor posts for numerous strands of lights, giving the whole space a beautiful warm glow–much like a lantern, if you will.

The rooftop deck will be a place for waiting for tables, as well as a place to get a drink and order from a separate bar menu. The space is equipped with its own warming kitchen, as are two interior private dining rooms that can seat 12 to 15 guests. The latter rooms are also still being worked on, so large parties may end up at the original Vij’s.

Guests travel a dim stairway between the ground floor and the roof deck. Its walls were left essentially raw brick and concrete–Vij professes he loves the way dampened brick creates the feel and aroma of a cave, and that was the secret tunnel sensibility he crafted for this part of the diners’ encounter with Vij’s.

That same raw brick is visible in the main dining room, which seats 85 (up 20 from the original location) and where more design elements include a custom carpet with bold curving swoops (echoed in the ceiling) that Vij says represents a river’s flow. The ceiling features lanterns similar to those at the first Vij’s, but modernized. This small homage to the copper light fixtures of the original Vij’s is just one more way the beloved restaurateur and Indian food guru nods to his beginnings on the Vancouver food scene.

While there are still a few aspects of Vij’s “Lantern” on Cambie to be ironed out, including getting the staff trained to Vij’s satisfaction, the restaurant is finally in its last stages of prep, and should be open sometime around the second week of December. Eager diners are urged to keep tabs on Vij’s Facebook page for crucial opening date updates, and more hints at what’s to come there.

We’ll have some images to share of the restaurant right before it opens, too, so stay tuned.