The 25th season of Vancouver Fashion Week wrapped up last week, and for many, the week-long event was as close to fashion heaven as they could get. For others – showing designers, stylists, models and everyone covering the event for media outlets and fashion blogs – it was a week of hard work that included champion feats of coordination, schedule juggling, excessive smiling, extreme hugging and fighting the onset of social media fatigue! 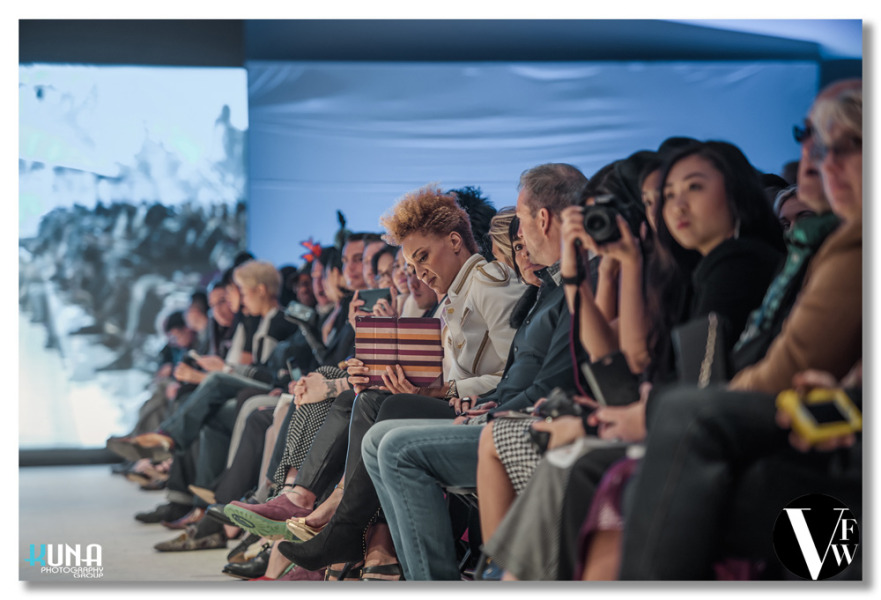 For those who think that VFW (or any international fashion week) is just about the clothing designs on the runway or by what is being worn by attendees, they are missing so much of the bigger picture. This is an bi-annual event which showcases talent from all over the world and each visiting designer brings their vision, language and a capsule of their culture, to our city to share. Behind the scenes much of the discussion revolves around the business of fashion, the politics and perception of fashion and the impact of the industry on lives and the environment.

Having covered the Opening Gala and Days 2 and 3 previously, I will focus on the top designers who showed in final four days of VFW. 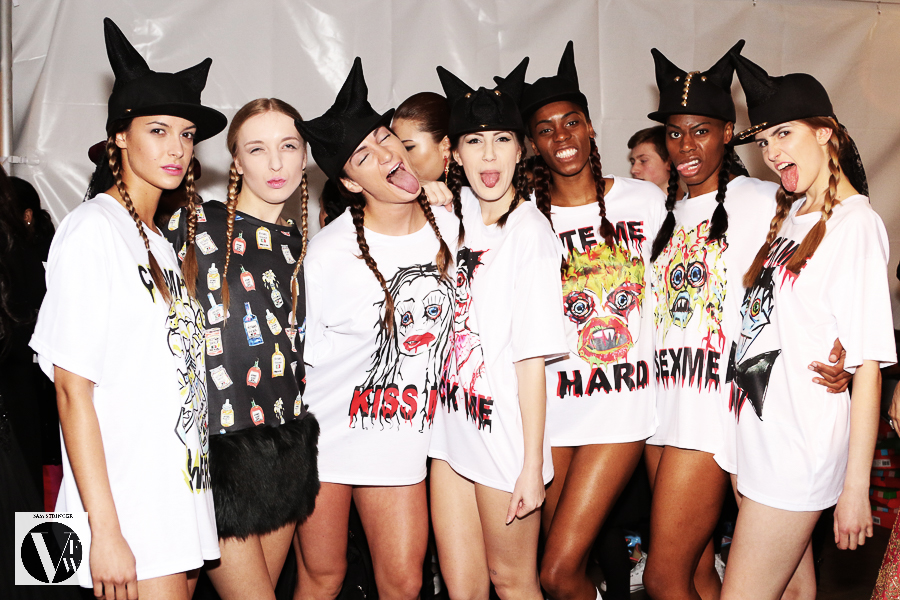 Japanese designer Atsushi Nakashima brought his SPUTNIK F/W collection of precision cut pieces for both men and women that reflected the exquisiteness of his brand. There were structured knits that sculpted the torso, circuit board screening that electrified suits and dresses and the inclusion of the over-sized faux furry neon plushy coats was wonderfully 1950s sci-fi . 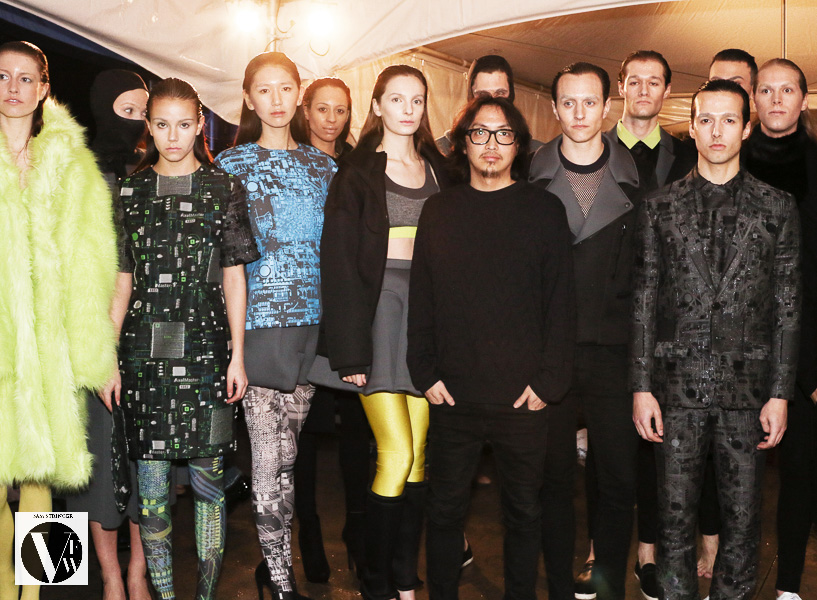 It is always a challenge to showcase accessories creatively on the runway. Jewellery designer Paloma Sanchez presented a clever runway show with her models dressed in black catsuits, walking a darkened runway with small handheld flashlights spotlighting her gem and mineral creations. The designer also gifted a select few of front row VIP with a unique necklace featuring a large raw crystal and gold threading. 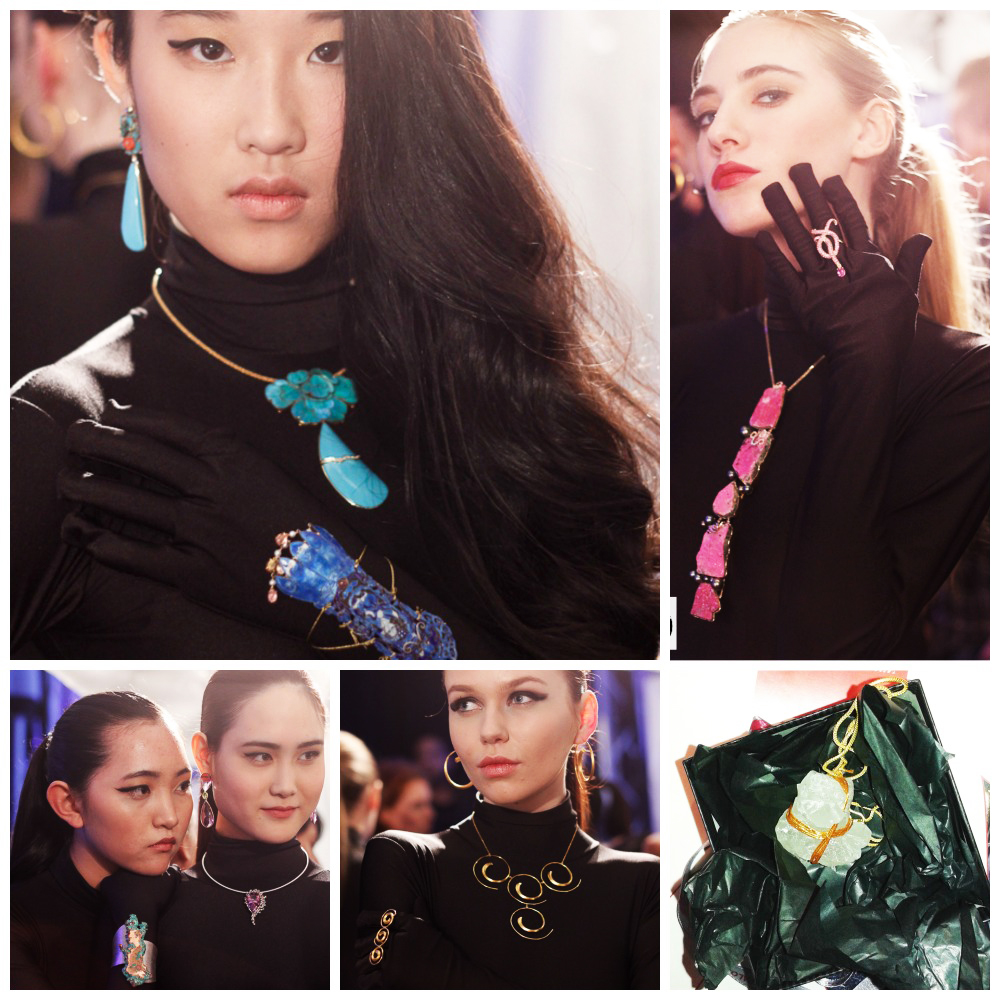 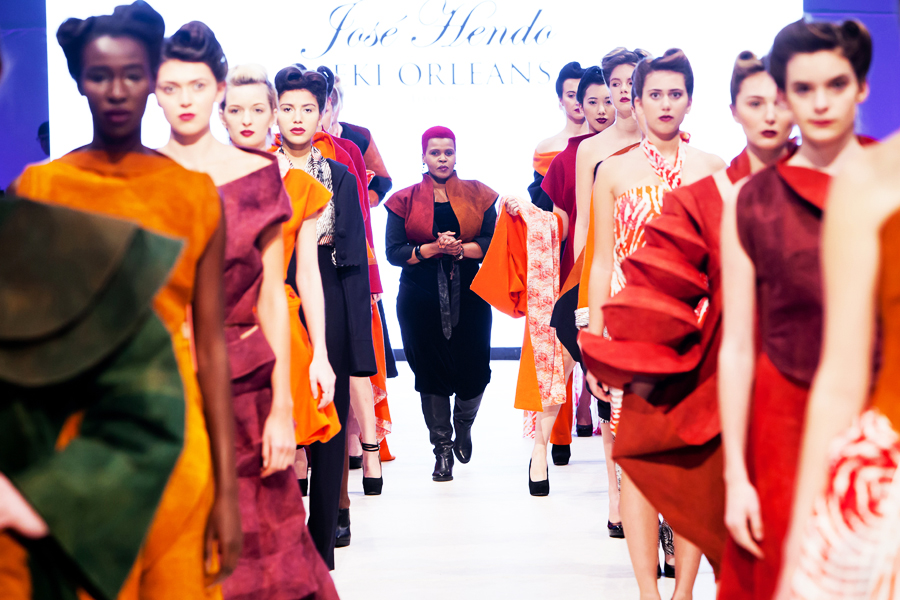 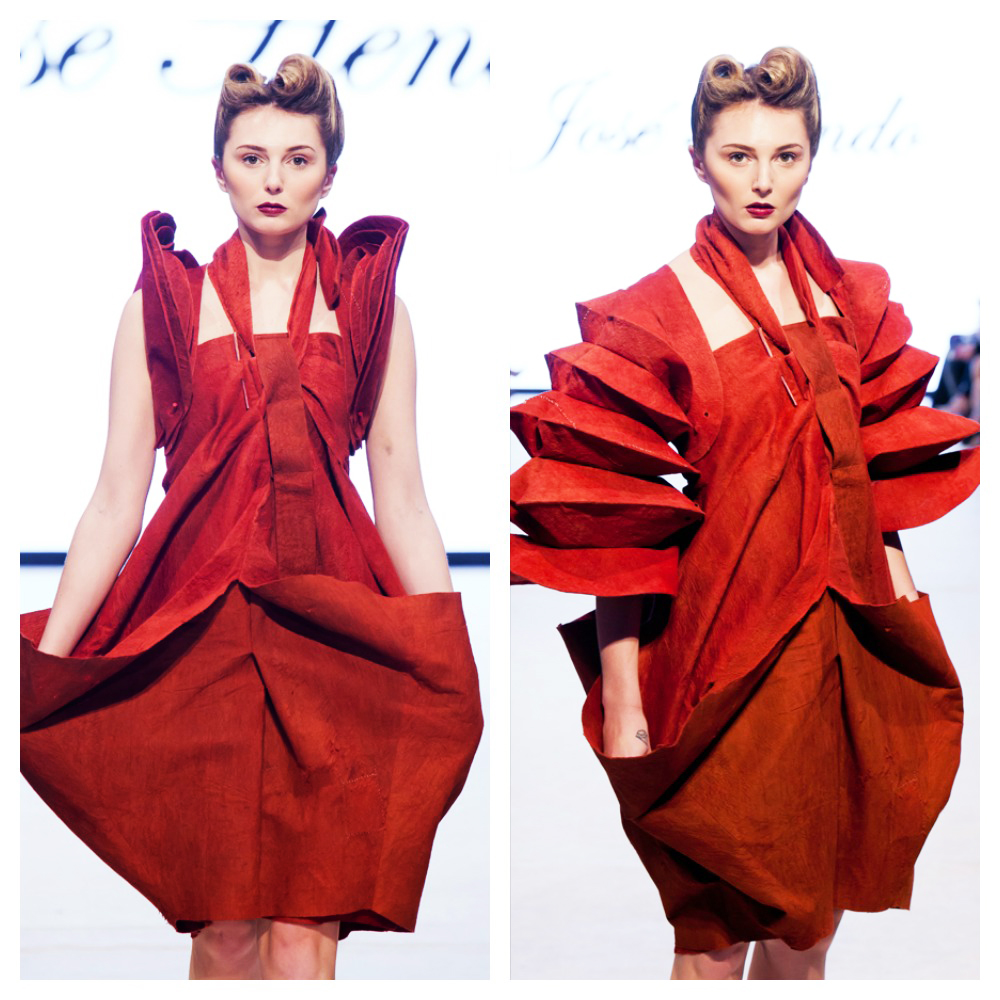 Project Runway Season 11 winner Michelle Lesniak brought retro spunkiness to the runway with a collection of swimwear made from self-designed fabric that featured images of hot air balloons and soft foxes and trimmed with thick cording. The suits were youthful, playful and a hit with the models and the attendees. 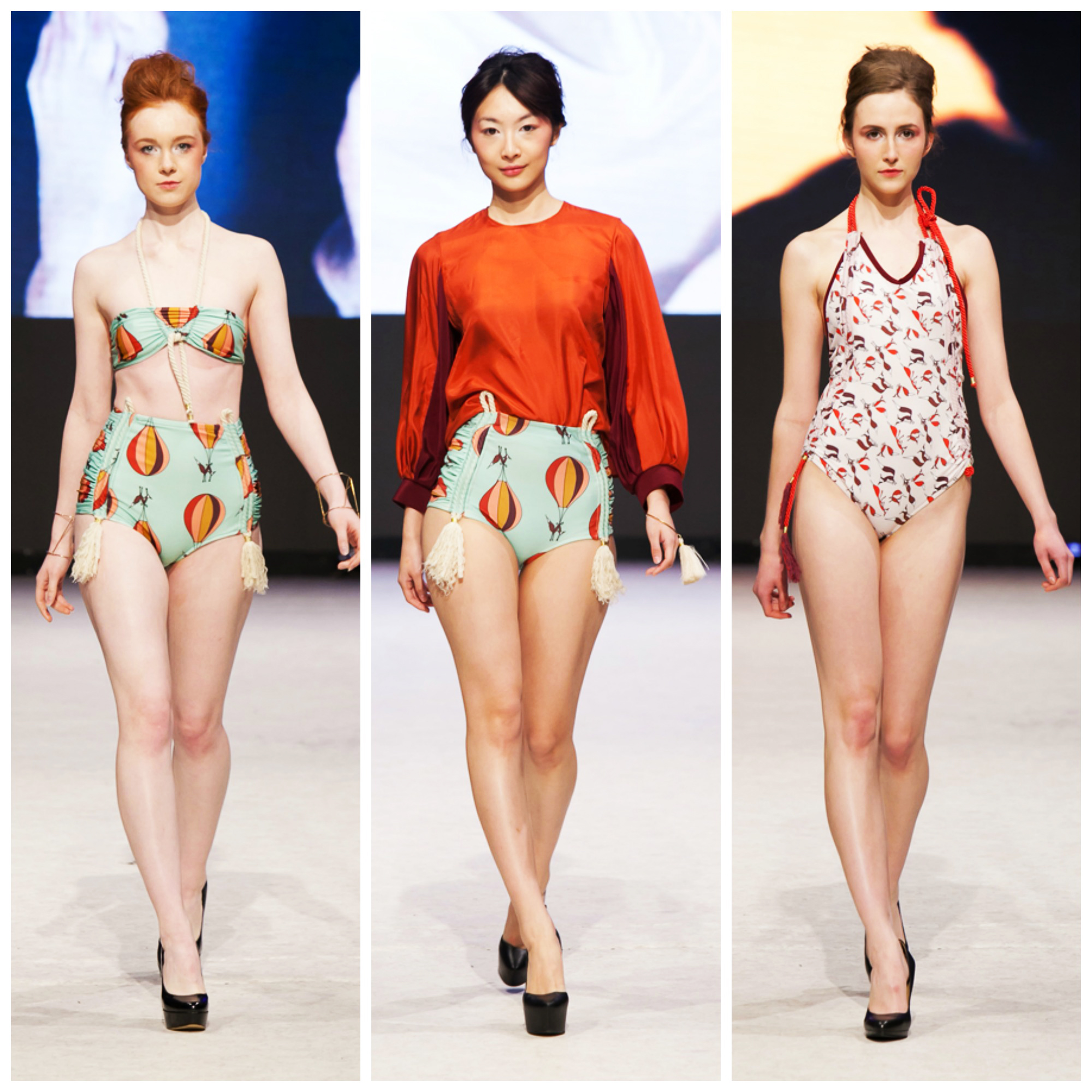 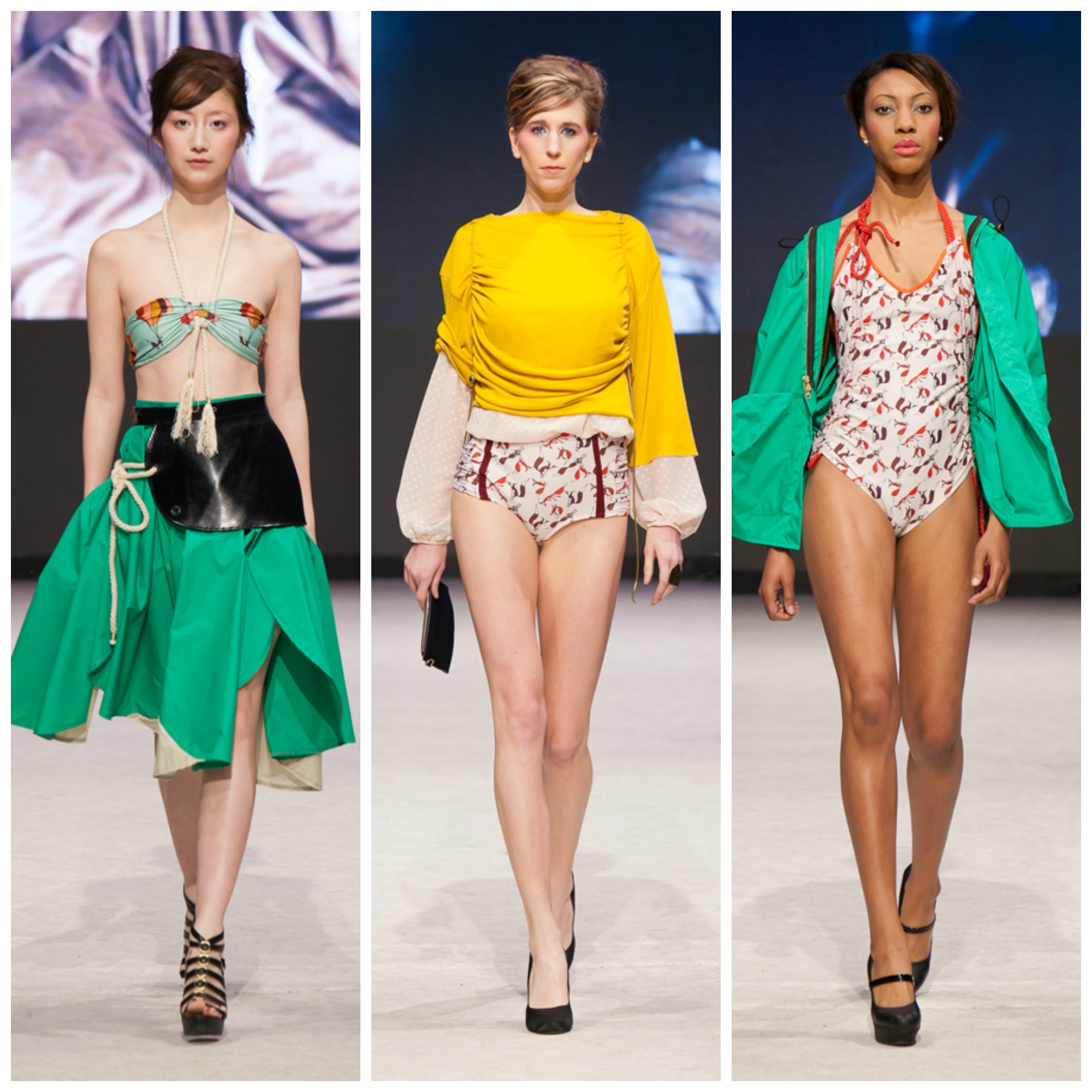 Vancouver based Pouneh Askarian brought a high level of chic elegance to the VFW runway by incorporating unique textures, laser cutting, quilting and faux fur into her separates collection. 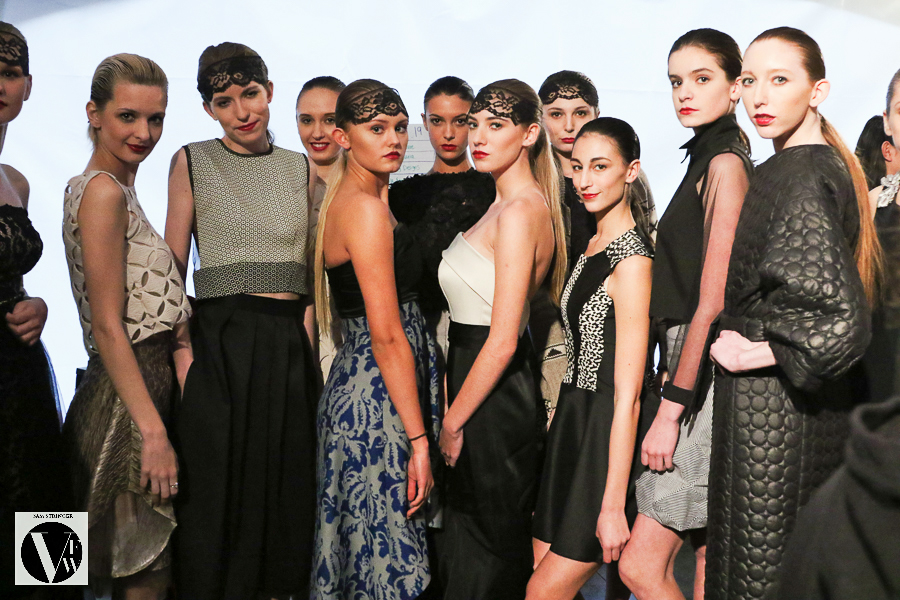 Peruvian Veronica Fujimoto designs the line Narumi. Her works blend tradition alpaca and cotton based fabrics with Japanese cuts and styling. The collection ranged from grey to black and the fabric presented so gorgeously soft it was hard to not reach out and touch the models as they went by. 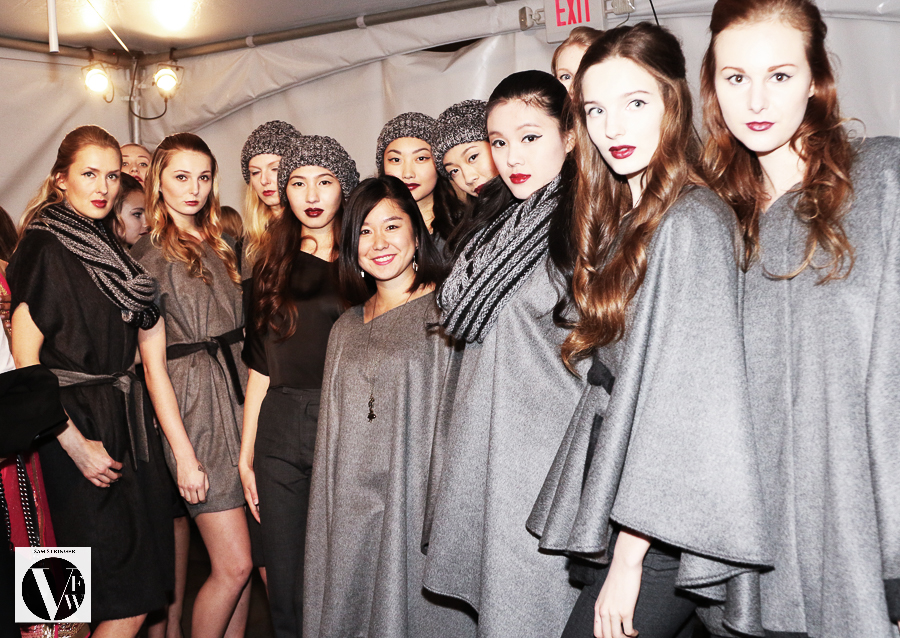 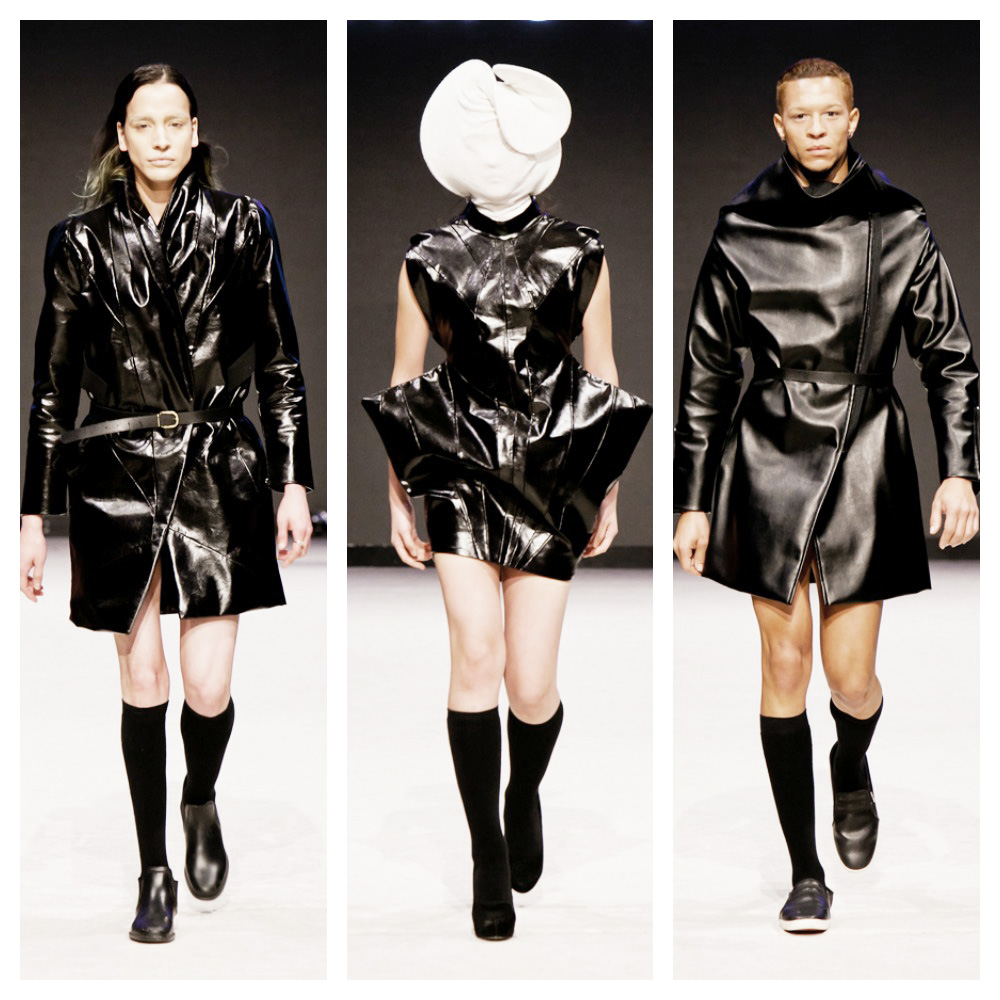 Last season, anti-fur protesters caused a unexpected ruckus specifically targeting a local designers collection which included fox tails as accessories. This season activists turned it up and brought their protest right onto the runway, with banners and GoPro cameras, walking in between the models of Tuesday nights full fur collection by a Korean designer. Protestors were quickly relocated outside where they continued protesting and discussing their cruelty-free message with VFW attendees, tourists and Canuck’s fans who were on their way to take in a hockey game. 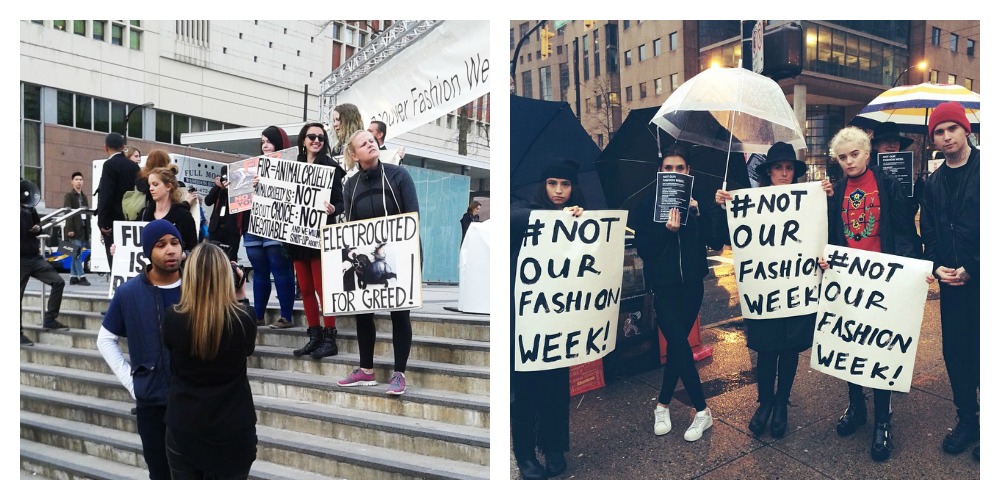 Each season there is a handful of models that breathe life into the designs they wear that we cannot help but be captivated by them. Whether it was a steely gaze, a sultry glance or a quirky youthfulness, these six stood out. 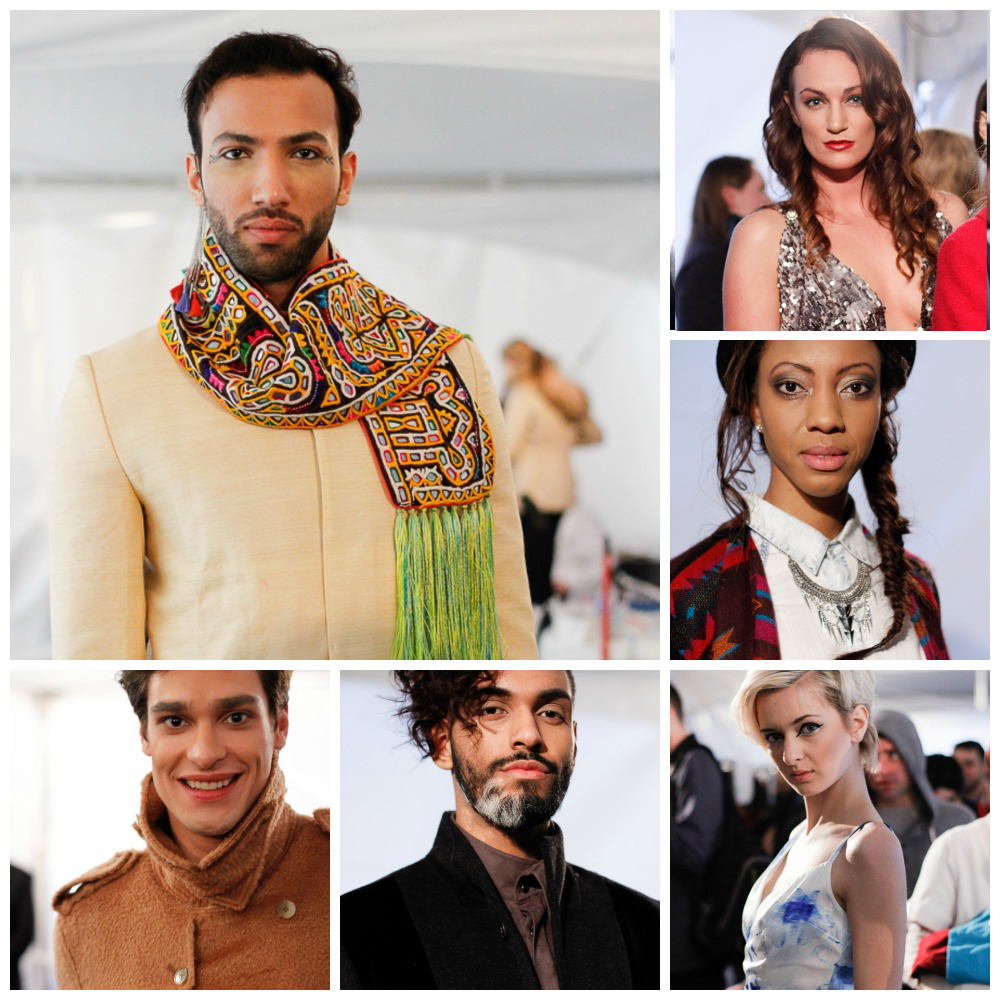 Not all the fashion is on the runway! Attendees spend weeks (maybe months) putting together looks and these home-grown fashionista range from security personnel to teachers, fashion bloggers to singers, designers to students and the resulting outfits are as diverse as the people who wear them. 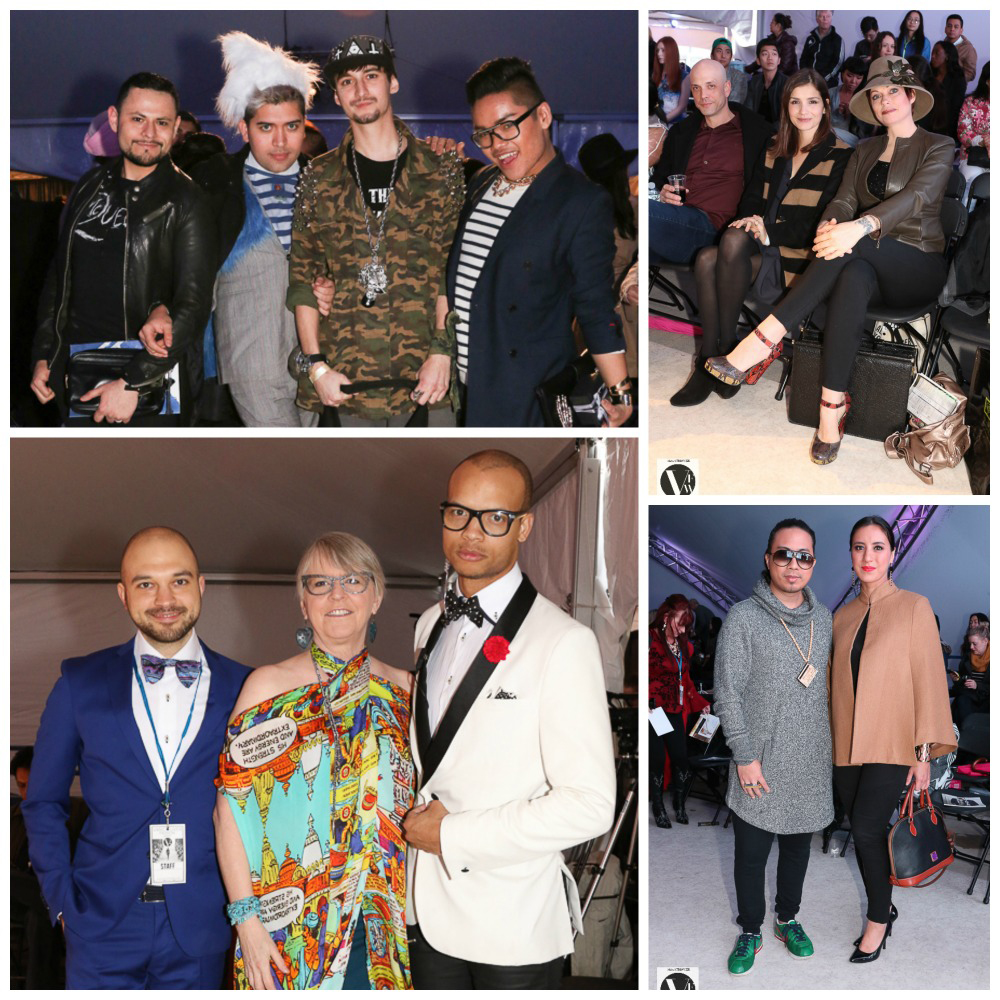 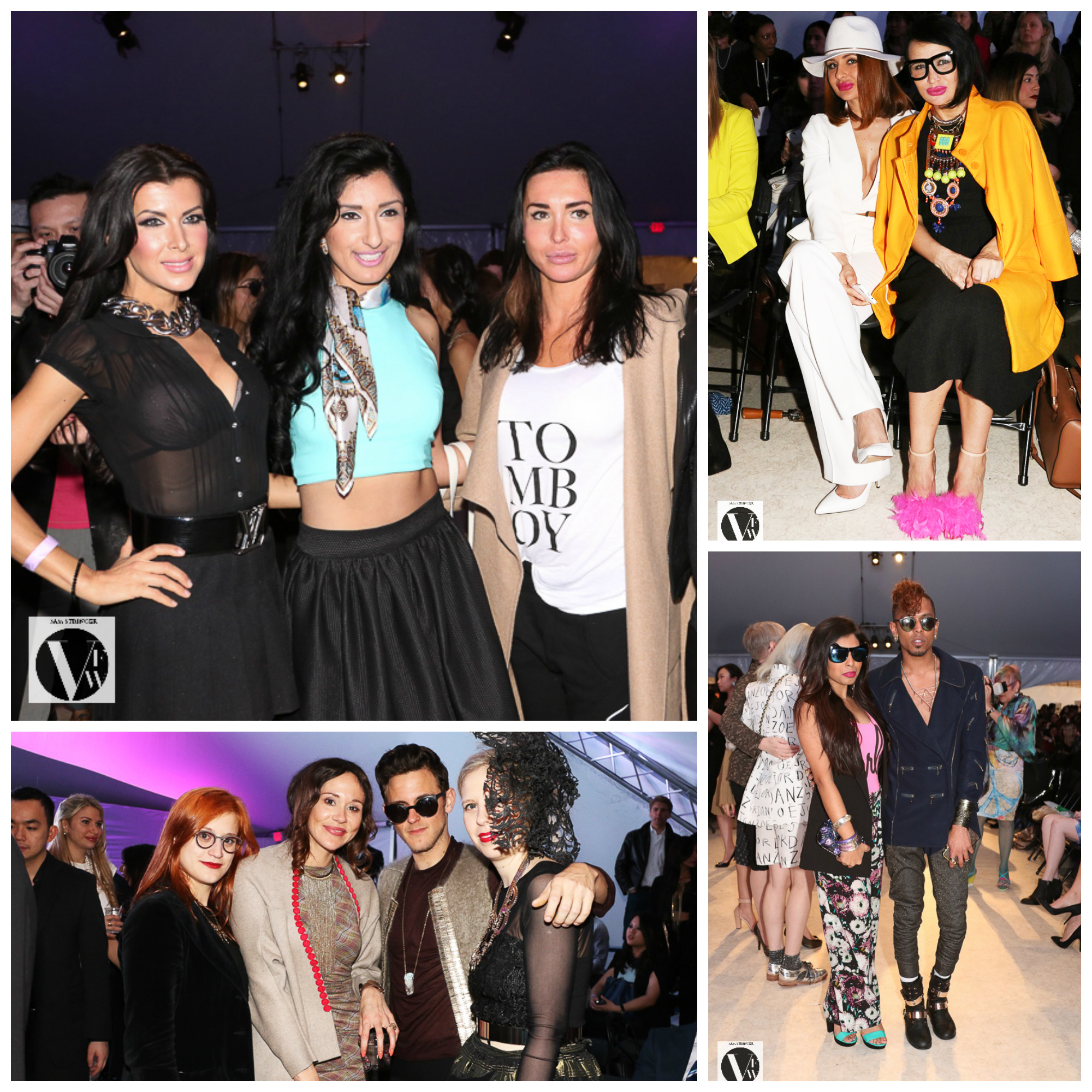 Catch the 26th season of Vancouver Fashion Week next September!