Thanksgiving has traditionally been centred around ham and turkey in my family, as I’m sure is the same for many of you. In addition, the vegetable side dishes almost always included butter or dairy of some variety. Thanksgiving is one of those meals we expect to be too full and sleepy after eating, no matter how many times we’ve promised ourselves that this year, we’ll exercise portion control.

Since becoming vegan and more focused on whole foods, it’s been a fun challenge to look outside of the box for recipes that include those warm, aromatic tastes and smells and elicit those same feelings of comfort and familiarity when we’re eating them. As a holistic nutritionist, I also don’t like to eat meat alternatives (such as Tofurkey) because they are processed and hard to digest. My focus on creating a vegan Thanksgiving meal plan is using mostly local, plant based and whole foods.

There’s a myth that surrounds vegan dishes that they won’t have enough protein and they will be left hungry. I don’t believe that for a minute. As you’ll see below, the dishes I’ve suggested are hearty and filling. I challenge anyone who doesn’t believe me to give it a try and let me know. What’s one meal without meat?

Here are my favourite resources for healthy, plant-based and vegan Thanksgiving menu ideas!

Executive Chef Doug McNish of Toronto’s Doug’s Public Kitchen has published an entire vegan Thanksgiving menu for all of us to enjoy. Chef McNish is dedicated to quality and taste and his menu looks delicious: homemade Cranberry Sauce, Herbed Bread Stuffing (GF option), Miso Mushroom Gravy, Spiced Sweet Potato Mash and Lentil Millet Meat(less) Loaf. A plate off of his menu is sure to fill up even the most carnivorous guest.

Angela Liddon’s popular blog is a hit for a reason: she’s a fabulous chef and she makes cooking easy. Angela’s created a 3-course vegan and gluten free holiday menu with step by step instructions on how to manage the preparation of it all. On her menu: Cranberry Pear Sauce, the Best Shredded Kale Salad, Lentil Walnut Balls, Maple-Cinnamon Mashed Sweet Potatoes, Pumpkin Pie with Pecan Oat Crust and Coconut Whipped Cream. My mouth is watering just thinking of eating all of this! 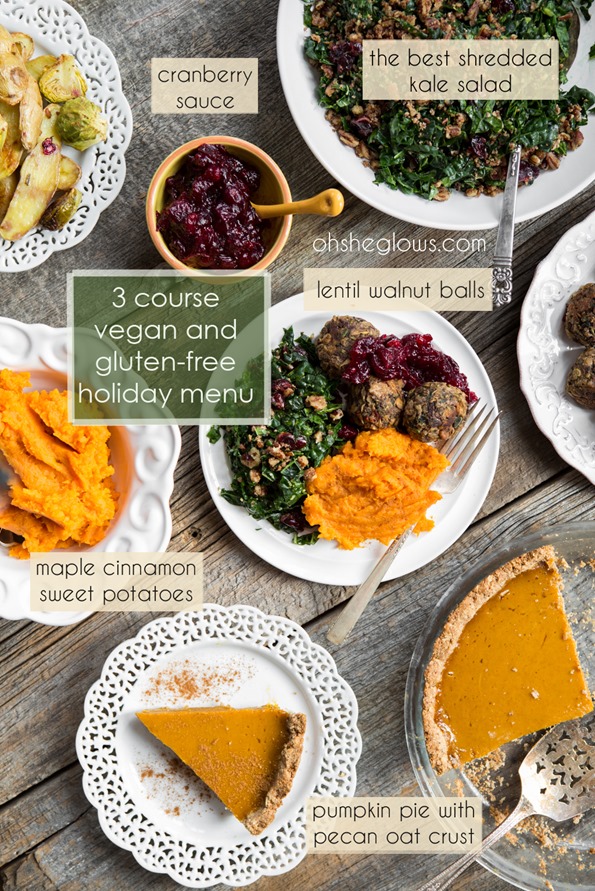 McKel is another incredible food blogger. With a background in dietetics and nutrition, her creations are always plant based and healthy without compromising taste. Her vegan Thanksgiving menu is expansive, so check out the link to see it all. Some of the recipes you’ll look forward to making are Classic Cashew Cheese, Pumpkin Hummus, Butternut Squash and Apple Soup, Maple Tempeh with Herbed Quinoa, Balsamic Brussels Sprouts with Red Grapes and a Spiced Cookie Dough Pumpkin Ice-NOcream. Delicious! 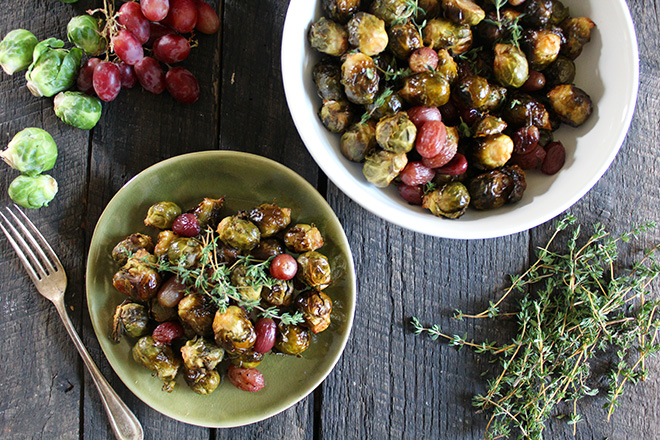 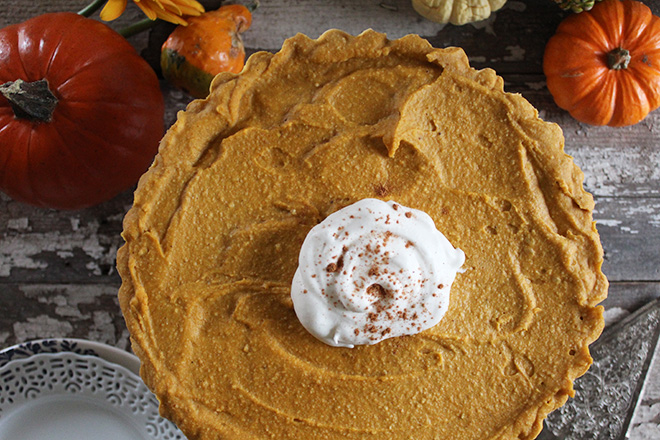 Joy McCarthy is an awesome Holistic Nutritionist in Toronto and author of the Joyous Health Cookbook released this year. If you don’t have her cookbook, check out her website for great vegan Thanksgiving menu recipe ideas, such as the Festive Quinoa Dish: Butternut Squash, Cranberry & Pecan.

Spiced and Salted Pumpkin Pie Minis. I’m pretty sure the photo and that title are all I need to say to ‘convince’ you to make these for dessert. Don’t they look incredible!? 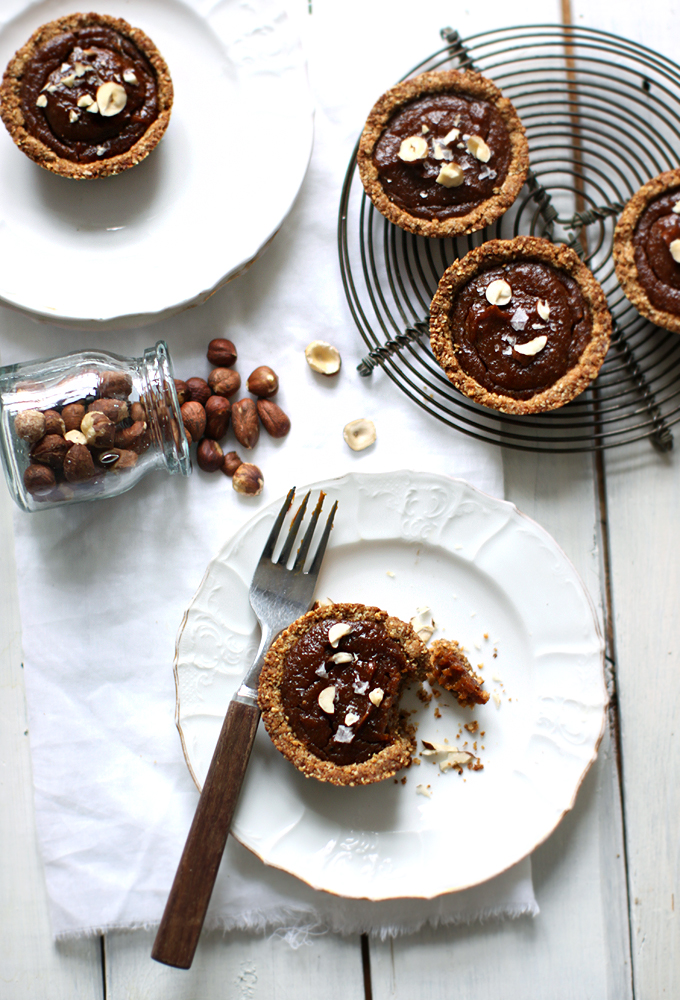 Vancouver’s own blog The Vegan Project has great vegan Thanksgiving recipes. Consider making their variation on the ‘Nanaimo Bar’ – the Pumpkin Cocoa Cashew Butter Bar – for dessert. This recipe replaces dairy with pumpkin puree and nut butters to get that creamy texture. If you want more great holiday recipe ideas from them, you can purchase their e-book “What to Feed That Effing Vegan: The Holiday Edition”. 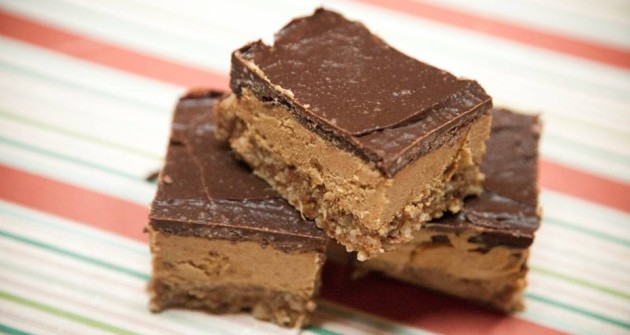 Thanksgiving is such a wonderful opportunity to come together with family and friends and be grateful for the bountiful harvest that led to the meals on our table. Have a beautiful long weekend!