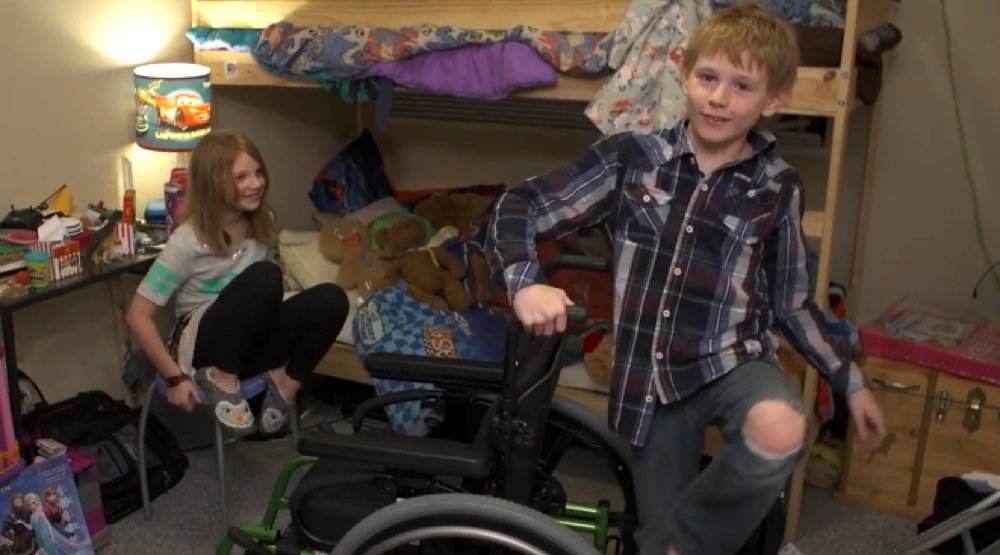 For years, Johannes has just gotten by with a broken wheelchair purchased at a thrift store because the debilitating costs of a custom, built-for-him wheelchair were out of reach for his family. And although our health care covers many things, most Canadians would be surprised to know that wheelchairs and mobility equipment don’t make the cut.

Johannes is a type A hemophiliac, which means he gets severe internal bleeding in his joints when he puts pressure on them for too long.

He doesn’t use his wheelchair all the time – he can often walk and run like any normal boy. But when he starts to bleed, he needs to lift any of the pressure he’s experiencing.

“But it’s not completely good because it puts a lot of pressure onto my other foot, which could create another bleed,” he told Global BC during Variety Week. Variety BC, a charity for kids with special needs in BC and the Yukon, featured Johannes during their fundraising week. All of this with a promise to give an update on his condition during the 51st annual Show of Hearts telethon on February 12.

A wheelchair lets him take the pressure off completely, but his old one wasn’t cutting it.

The chair had no arm rest on one side and no foot rests, which create additional strain on his bleeding joints. It also didn’t have any emergency brakes – and Johannes bent the metal connecting the remnants of one during his interview with Global BC.

Johannes’ wheelchair was originally from a thrift store, but his father knew it couldn’t last.

He looked to the At Home Program to try and get a new one for Johannes, a program designed to help children with disabilities and complex health needs.

Unfortunately, the program has specific requirements for who can get aid. One of the requirements, according to the government website, is the recipient of the aid must be “assessed as dependent in at least three of the four activities of daily living (eating, dressing, toileting and washing).”

“I’ve tried to go down every road that I possibly can,” his father told Global BC. “But basically without that designation, he doesn’t qualify for any of those social programs.”

Johannes used his thrift-store wheelchair for five years before another option became available.

That option was Variety BC, a children’s charity that’s dedicated to “stepping in where health care ends.”

Variety measured Johannes for a new wheelchair – making sure it not only had all the essentials like brakes and foot rests, but that it also fit his body properly. Then, to raise money for the wheelchair, they featured Johannes in Variety Week.

This was the first time the charity had done anything like Variety Week. It featured the stories of several kids getting help through Variety, and invited people to donate towards those causes.

In total, Variety Week raised more than $680,000. And that meant Johannes could get his chair.

Variety will showcase an update on Johannes and his new wheelchair during the Variety Show of Hearts telethon on February 12.

The telethon will be broadcast on Global BC from 9:30 am to 5:30 pm on February 12, and will feature stories from kids like Johannes, as well as live performances by singers like Dan Mangan, Dallas Smith, and the Washboard Union.

When: Sunday, February 12
Time: 9:30 am to 5:30 pm
Where: Hard Rock Casino – 2080 United Blvd, Coquitlam
Price: Tickets to the event are free. You can watch the telethon on Global BC and online