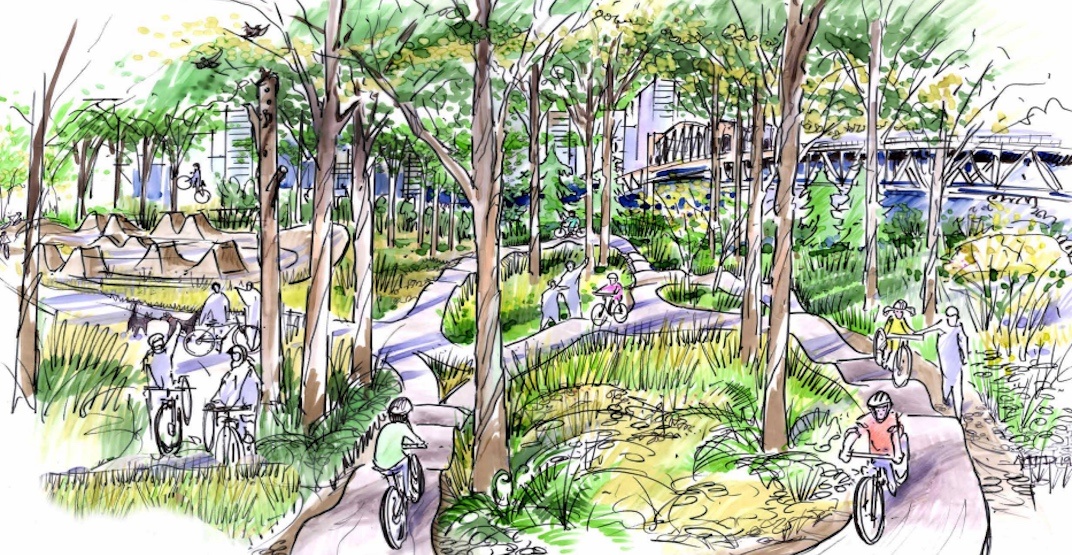 There could be a new bike pump track at Vanier Park in Vancouver’s Kitsilano neighbourhood, designed in mind for the little ones.

The Vancouver Park Board unveiled its proposal last week to build a pump track specifically for young children to ensure the Vanier Park bike park does not exclude younger users. Currently, an existing dirt jump track in the wooded area is well used by a wide range of users, but it mainly caters to expert-level riders.

The existing bike park is located in the wooded area just west of the south end of the Burrard Street Bridge. Access into the area is located through an adjacent parking lot. 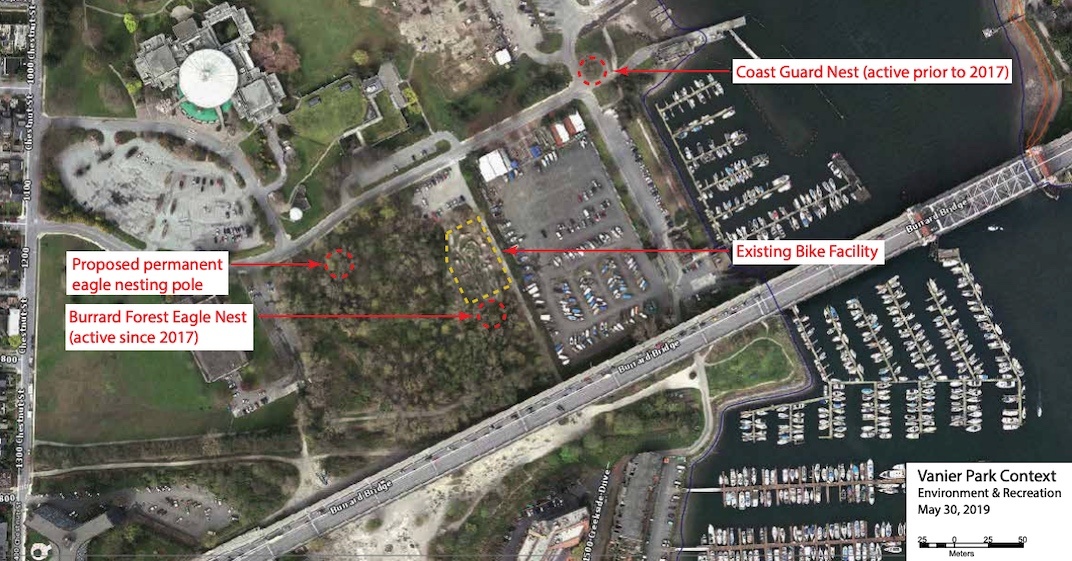 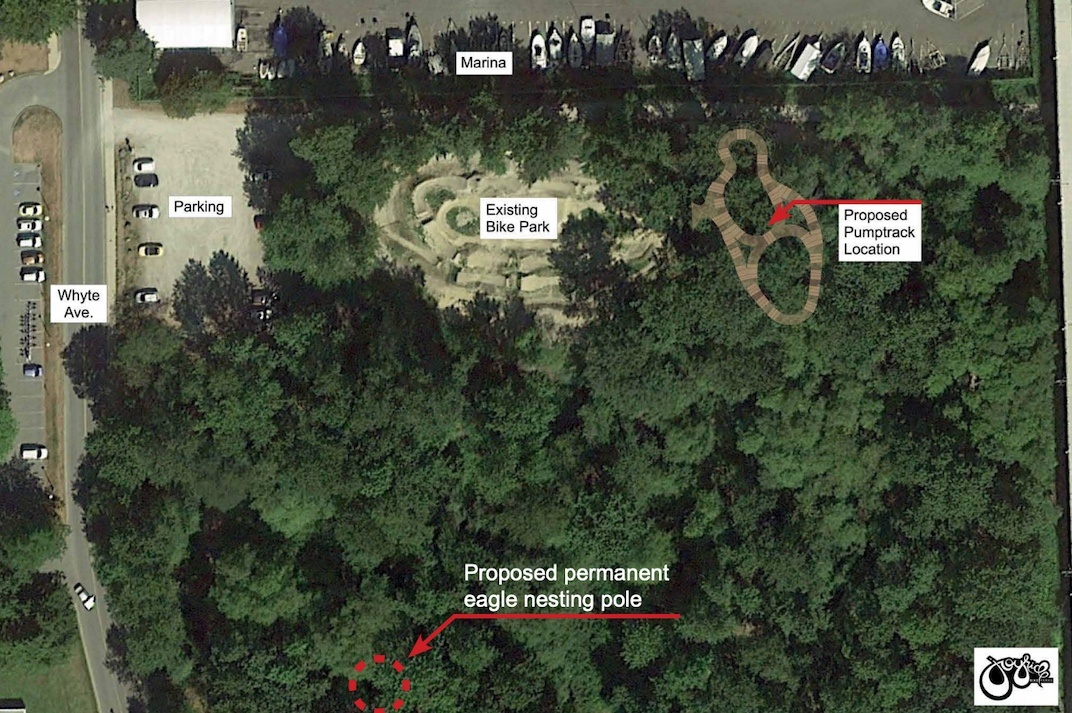 If all goes as planned, the new continuous loop expansion for kids would be located just west of the existing track within the wooded area. It would be constructed by Joyride Bike Parks, which is behind similar installations in Whistler every summer.

The new track will be constructed using dirt; no paving is required. Additional trees will also be planted to help enhance the area’s tree canopy, and a split-rail cedar fence will be installed to delineate the existing bike jumps and proposed pump track. 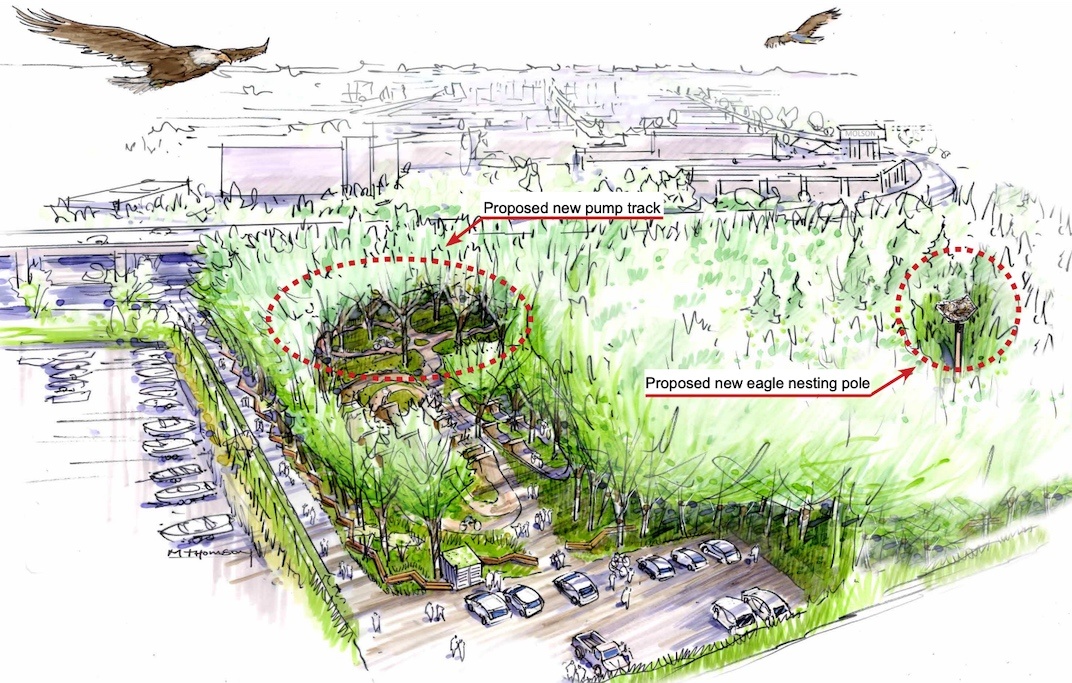 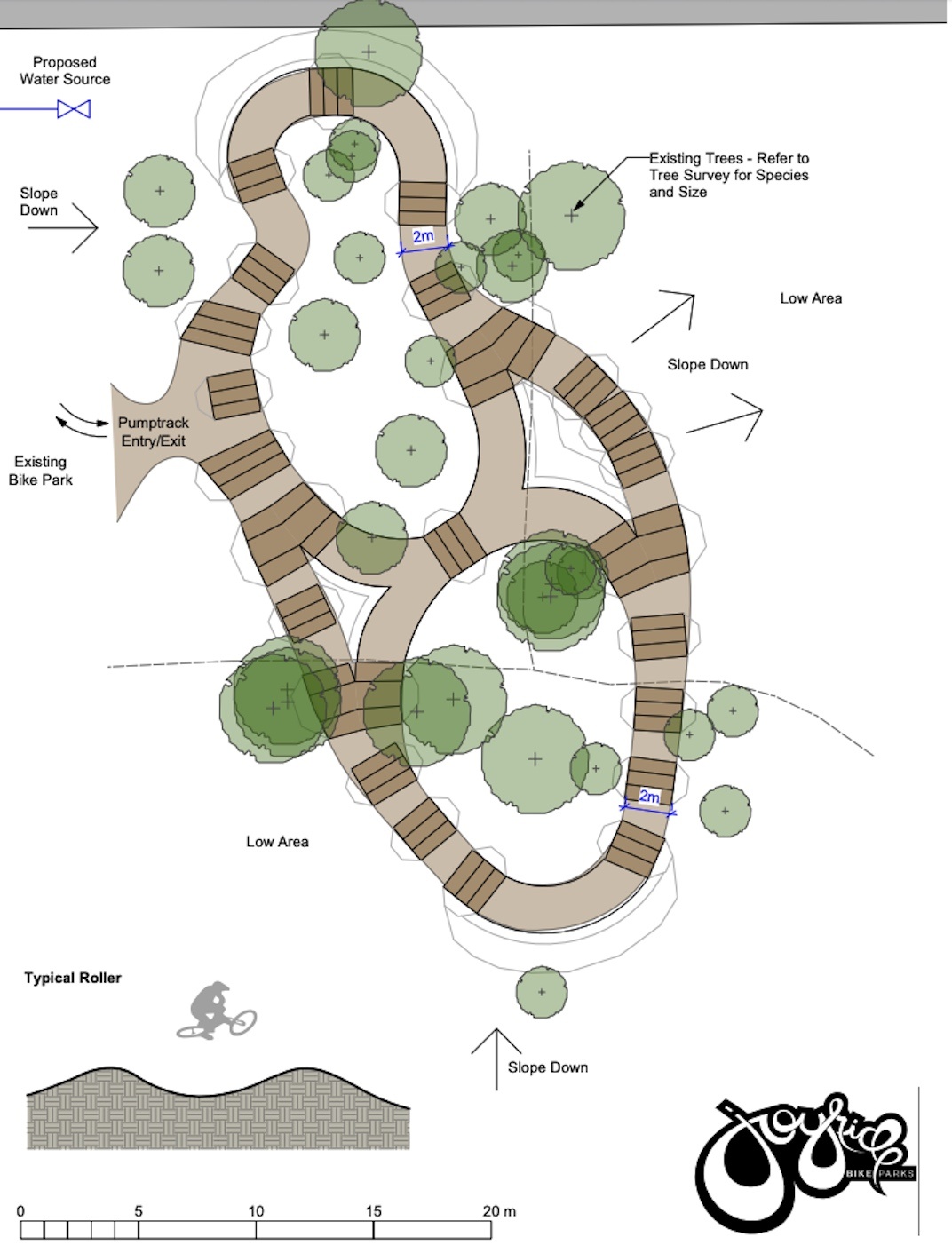 Layout of the new bike pump track at Vanier Park. (Vancouver Park Board)

In addition to the expansion, the park board is also proposing new measures that better protect the park’s eagle habitats and prevent future temporary closures of the bike park when eagles are nesting.

The bike park was closed and fenced off in March after eagles laid eggs in the nest platform above the track, and it was gradually reopened last month. Park board staff have also deemed this nest to be in a structurally unstable tree, which adds to the need for a relocated nest platform. 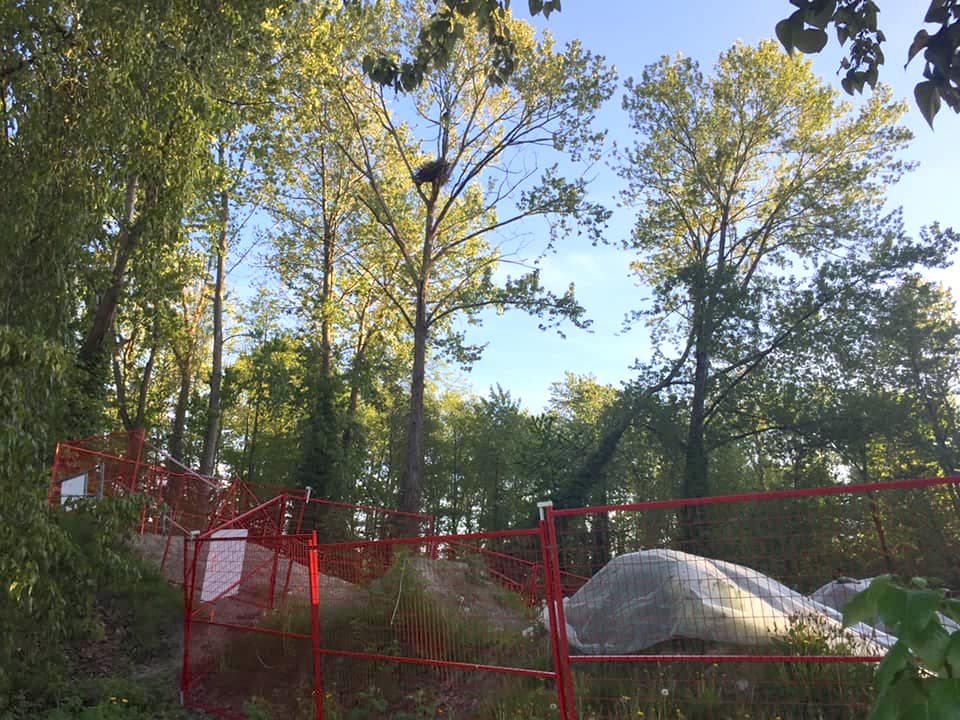 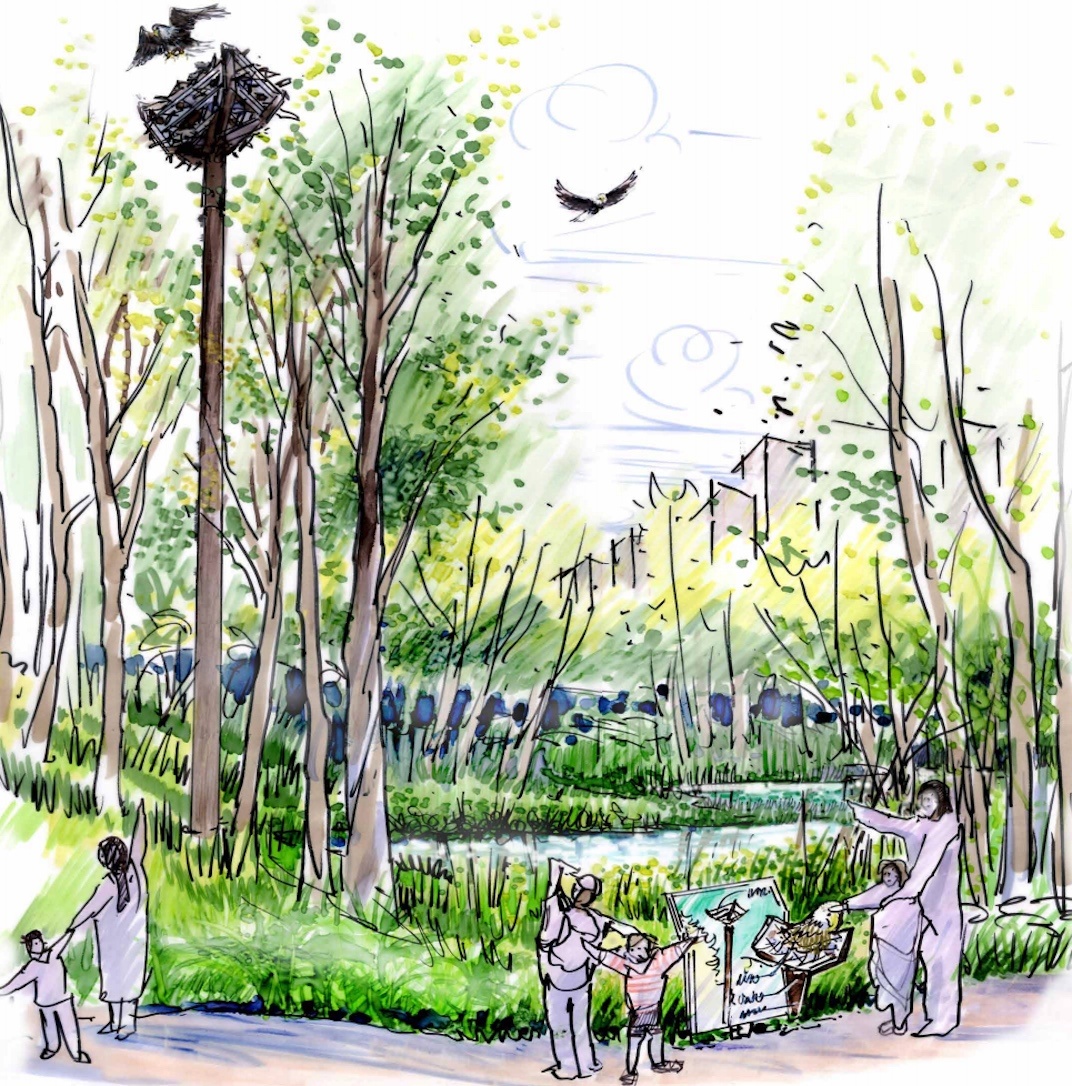 This wooded area contains relatively young trees that are less than 40 years old, but there are an abundance of invasive species that are displacing native trees and groundcovers. Furthermore, the area has become an illegal dumping ground for random garbage and debris.

Other improvements and stewardship initiatives to the area could include removing invasive plant species and garbage, improving trails and signage, and planting longer living native trees, shrubs, and groundcovers.

The plan is to install the new track and eagle nesting pole, and remove garbage and add waste bins in August and September of this year. The remaining measures and improvements will take place later in Fall 2019 through Spring 2021.

In the summer of 2015, the park board also opened a pump track at Empire Field in Hastings Park.