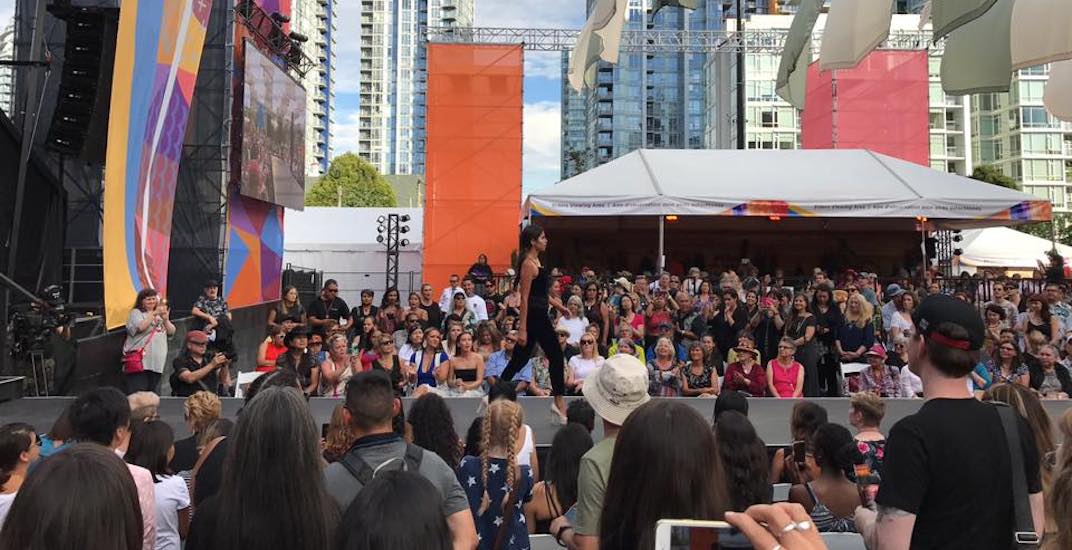 The main stage at The Drum Is Calling Festival at Larwill Park in downtown Vancouver. (City of Vancouver)

Nearly 40,000 people attended The Drum Is Calling Festival, the flagship event of the City of Vancouver’s Canada 150+ program, over the course of its nine-day run late last month, according to a release from the municipal government.

The free indigenous-themed festival celebrated the contributions and cultures of First Nations, Inuit, and Metis artists, and the idea that Canada “began before 1867” was held from July 20 to 30 at Larwill Park in downtown Vancouver.

There were seven stages and venues, including the main stage at Larwill Park and surrounding streets, and the talent was comprised of over 600 artists and performers who showcased traditional and contemporary indigenous art and music.

There were also four fashion shows, with 50 models and 25 designers, as part of the first Vancouver Indigenous Fashion Week. As well, four new indigenous-themed murals were created by 12 indigenous artists, and a unique life-size village of indigenous housing structures was constructed on a portion of the parking lot site.

There are two other signature events to the City’s Canada 150+ program, namely the Gathering of Canoes held last month as well and the upcoming Walk of Reconciliation on September 24.

The City of Vancouver has designated itself as a ‘City of Reconciliation’, and its Canada 150+ programming was planned in collaboration with three local First Nations – the Musqueam, Squamish, and Tsleil-waututh.

Daily Hive is a Proud Media Partner of Canada 150+