It’s after midnight, you’ve emptied enough glasses that you’ve lost count and you haven’t ingested any solids for the same length of time you spend at work most days.

You might be a little wobbly as you step out of the bar and onto the brisk Vancouver streets, but you’re sober enough to know the next day could hurt. It’s time to seek out something substantial to eat before you trudge home and collapse into bed.

Luckily, you won’t have to venture far to find a late night treat in downtown Vancouver on the weekend. Here are five places, ranked in order of their hangover curing properties, to find what you’re craving in the small hours after a big night. 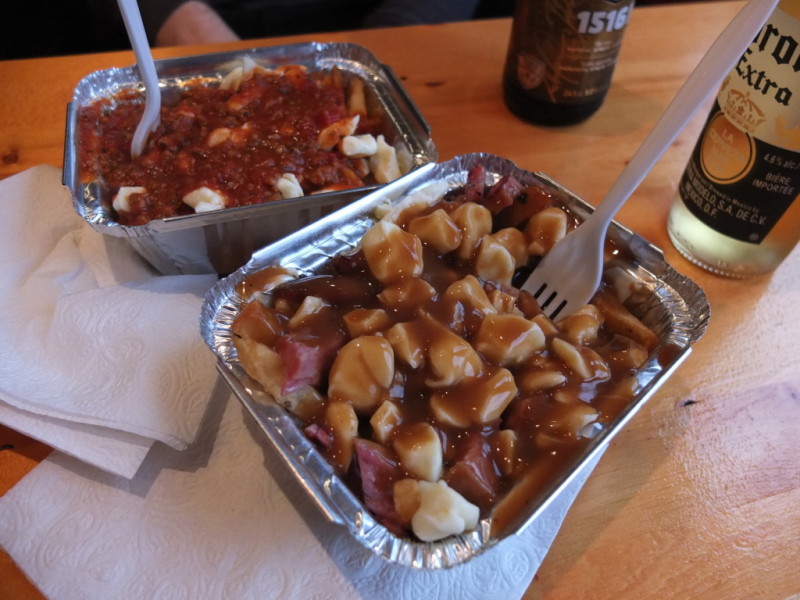 What it’s like: “Did we tell you the name of the game, boy? We call it riding the gravy train.” These words from the Pink Floyd song ‘Have A Cigar,’ which were playing over the speakers at La Belle Patate during a recent visit, make a fitting soundtrack for chowing down on gravy-smothered trays of fried potato. This pub-style poutinerie has a ‘70s playlist and wood-and-vinyl booths in which to slouch between mouthfuls. There’s also a handful of places to perch at the window and watch the night unfold on busy Davie Street.

The food: Fries stacked like little mountains, their gravy peaks topped with squeaky cheese curds, come in a huge range of varieties listed on chalk boards above the counter. Poutines can be served plain or, for a Quebecois flavour, with Montreal smoked meat. There’s the option to add international flavours to the Canadian fare with toppings including Mexican and Italian sauces. Smokie dogs, smoked meat sandwiches, onion rings and grilled cheese make up the rest of the menu. They also serve beer for those who are not quite ready to call it a night.

Hangover helper?: The best. This kind of carb-loading should provide the stamina to help endure a marathon hangover. 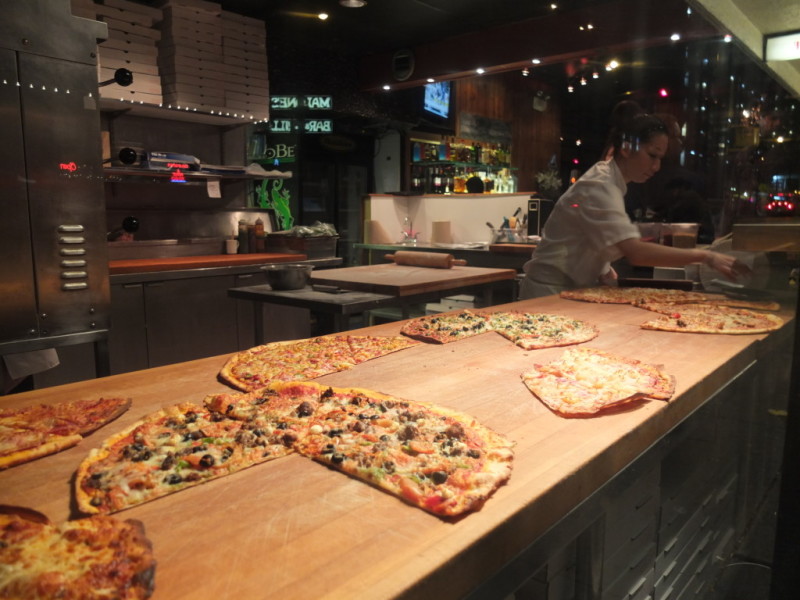 Window shop for pizza by the slice at Goldies.

What it’s like: A dimly lit lounge bar where you can order a drink and watch the pizza cooks at work while you wait for your pie to turn golden. Goldies also has a to-go window where varieties sold by the slice, which vary from time to time, are displayed on long wooden boards for window shopping. After a long night out, choosing the perfect wedge from those discs of crispy bread feels a little like a cold drink of water on a hot day. It’s only a few minutes but the wait before that paper plate crosses the counter can be agonizing.

The food: Thin-crust pizzas, “carefully crafted” as their flyer says, in a range of carnivorous and vegetarian options. These pies are of a much higher caliber than your average late-night slice, and they do just the trick when you need a quick hunger fix at an untimely hour. It’s pizza you’d eat any time of the day, without a push from a few glasses of wine, or whatever your poison. The Mushroom Lovers variety is a winner. 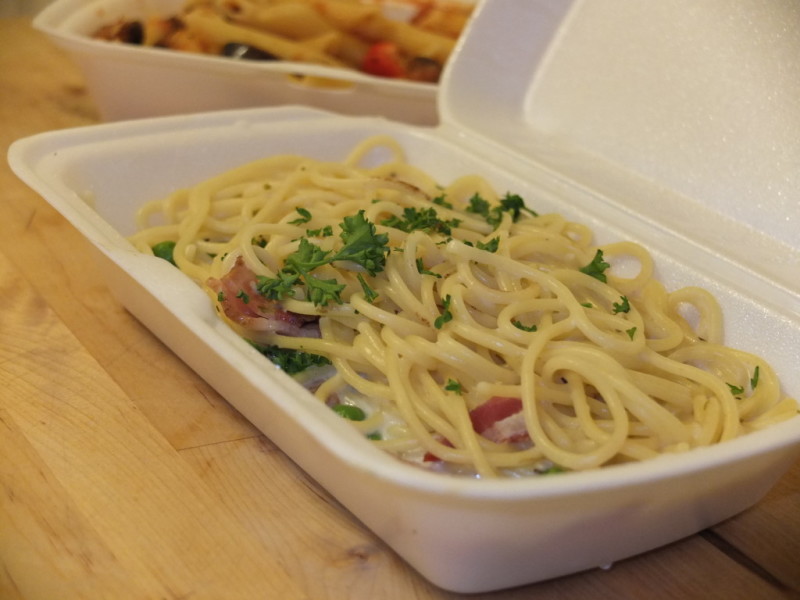 Spaghetti from Basil Pasta Bar makes a hearty alternative to fried food late on a Friday or Saturday.

What it’s like: You’ll know you’re at Basil Pasta Bar from the graffiti-style art work and garlic-smells wafting from the front door. The bright lights inside might show your tired eyes and hours-old make-up but who cares when you’re slurping spaghetti like Lady and the Tramp (whose picture is part of a pasta-themed collage on one of the walls)? The furnishings are all green, dark wood and sharp angles, and the kitchen provides a soundtrack of sizzling pans and clanging bowls to ensure its patrons are ravenous by the time their food lands on the table.  Basil is as much a take-away joint as it is a restaurant so pasta can be ordered to go for those worried the alcohol has affected their pasta-handling skills.

The food: Hearty and served in generous helpings. The penne arrabbiatta with tomato sauce and chorizo sausage, a house special with a spicy kick, is one of the best. There’s also the option to create your own dish by picking the pasta, sauce, meat or seafood, vegetables and a cheese or herb garnish. Sides include Caesar salads and soups.

Hangover helper?: Substantial and satisfying without being deep-fried, it’s a cleaner alternative to most late night meals. Varieties served with vegetables could even pass as nutritious, and that’s saying something for food ordered after midnight. 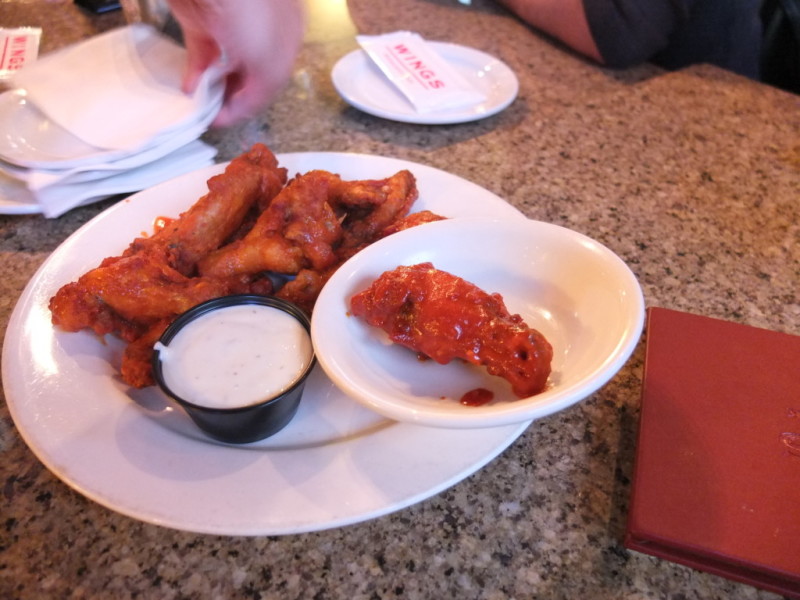 Buffalo wings from WINGS Tap & Grill, a comfortable place for a late bite and a beer.

What it’s like: Very big. Cavernous, even. This enormous room seems to have no end until you reach it and you’re rewarded with a seat next to the fireplace. Hockey jerseys adorn the walls of this comfortable sports bar, where guests can sit in booths, tables or at the bar. Casual service and room to move makes Wings a good place for a bite and a beer between bars if you need reprieve from the close quarters and loud music. Even if you plan to kick on into the night, the comfort factor here makes it perfect for recharging.

The food: No explanation needed, there’s 23 flavours of tasty chicken pieces in quantities as big as anyone could want them (for $39.88 you’ll get 5lb). Hot wings are their specialty so the menu comes with a heat rating and some interesting explanations of the source of each flavour. The Jakarta heat, which the menu claims was “recently discovered in a southeast Asian lava flow”, has a three pepper rating. Patrons who are operating on a little Dutch courage might be tempted to try the Bobby Wing, the hottest of the hot wings which comes in individual servings direct from “the house of pain”. These fiery, hiccup-inducing morsels are probably a challenge best left for a sober day, but lowered inhibitions and poor decision making might tell you otherwise. There are also alternatives to the restaurant’s namesake, with a menu of entrees including pastas, stir-fries and curries.

Hangover helper?: As long as you stick to the milder flavours or entrees, yes. You might feel brave enough to take on the hottest chilli, but resist and your body will probably thank you for it. 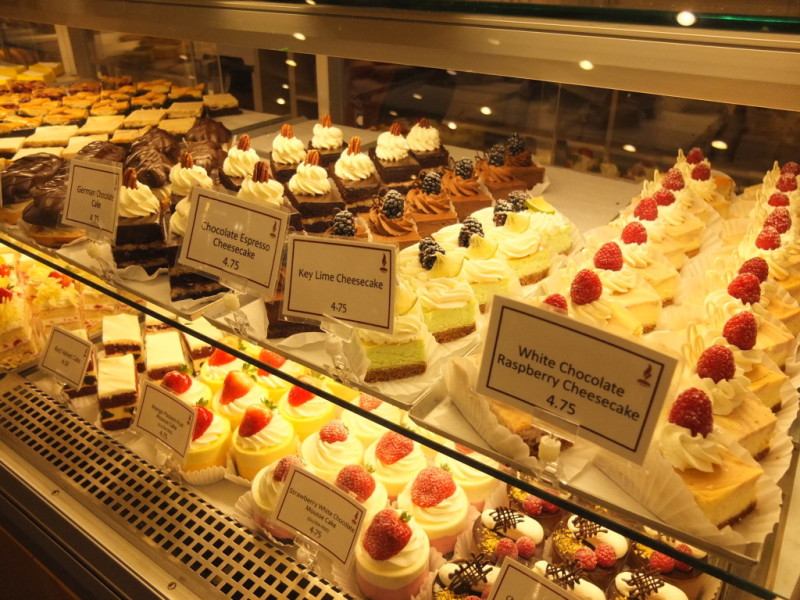 It’s not easy to choose from the sweet treats at Breka Bakery & Cafe.

What it’s like: Fresh and white with chunky wooden tables and industrial-style fittings, Breka has the perks of a bright, daylight coffee shop and the convenience of being open for midnight snacks. Largely inhabited by caffeine-fuelled night owls, their faces lit by the screens of Macbooks, it’s a quieter place to debrief in peace and pick up a coffee to keep your hands warm on the walk home.

The food: The bakery treats match the atmosphere, casual but good quality, with good, strong coffee and cake to satisfy late night cravings. It’s hard to choose from the rows of pretty pastries and sweet slices glowing under lights, but too many choices isn’t a bad problem to have after a few too many glasses of red with dinner. For something more substantial, there are savoury scones, sausage rolls and paninis.

Hangover helper?: Not so much, coffee and cake might help with sobering up at the end of the night but they’re unlikely to make a dent on an empty stomach. Savoury pastries and paninis, on the other hand, might be a good choice if the aim is to recharge before dawn.

What’s your favourite late night spot? Let us know in the comments below!