How do you win April Fools’ Day? The most clever and creative pranks usually get the most buzz, and the people and businesses of Vancouver did a stellar job this morning of pulling out their most ridiculous – yet, somewhat believable – announcements, product launches and changes.

We tricked readers by announcing the made-up “Giant Panda Experience in Stanley Park” and a new sustainable initiative to have goats grazing on the Convention Centre’s green roof, but we weren’t the only ones to play some games. Check out this list of some of the best April Fool’s pranks in Vancouver:

SFU said: “An increase in student injuries caused by texting while walking has spurred a new campus policy at Simon Fraser University. After monitoring students’ walking patterns, the university has created dedicated lanes for safe travel with a view to promoting a more mindful and engaged student body.”

The University also said they would be implementing road-safety rules into building corridors.

The Mayor announced the big change over Twitter this morning:

Hootsuite said: “Navigating the dating world isn’t easy, especially as more and more dating sites and apps emerge, segmenting your potential pool of perfect matches. With that in mind, Hootsuite is announcing Hootmeet, a new dating integration. This patented technology brings all the big dating sites into your social media dashboard, saving you time and helping you in your search for love.”

The new integration would also give you dating suggestions and the ability to “swipe right” on Twitter profiles to make your move.

Blenz said: “We love saying yes to customer requests, so we are extremely proud to officially launch the Blenz Vending Machine! It’s built with state-of-the-art technology and it is able to make all hot and cold drinks on the Blenz menu with the touch of a button.”

Check out today’s forecast below:

Hawksworth said: “Over the last four years Hawksworth Restaurant has been a thriving part of Vancouver’s diverse dining scene. As with any restaurant there is a natural evolution that occurs and it is hard to believe that we are already approaching our fourth anniversary. To celebrate this special day Chef Hawksworth and the team are excited to announce an exciting new direction for Hawksworth Restaurant – the fine dining experience will be reborn as an upscale all-you-can-eat buffet.”

The buffet bar would serve fine meats, seafood and an omelette brunch station.

Metro News announces all roads will turn to bike lanes

Egged on by a growing frustration with “bicycle jams” on the current bike lanes, Robertson threw rules and regulations aside and made the controversial decision without hesitation.

The BMO Marathon said: “The section will consist of tree ladders, cargo nets, bridges, tightropes, and platforms suspended in the trees. Runners will navigate from tree to tree for approximately one kilometer before descending back to ground level to complete the final kilometer of their race.”

BMO Marathon also said it would be the first race in the world to recognize vertical distances.

Planted on Wilson’s property is a development application sign notifying the neighbourhood of one property owner’s plans to build an 8,000 sq. ft. floating helicopter pad with 10 ft. high pylons just off the coast from 3085 Point Grey Road, Wilson’s address.

Spartan Race said: “Tired of the same old races? Looking for something completely new and exciting? Register for our new Spartan Race Naked Heat and take it to the NEXT LEVEL. There is no time to be shy, no chance to rethink – you’ve got to have Spartan courage, ALL THE WAY!”

Event organizer Dean Stanton knew the event would be a hit. “Spartans are crazy, so we had a lot of faith that people would embrace the naked heat. It sounds insane at first, when you think of the obstacles involved, the possibility of rope burn, but that’s not going to hold anyone back. Spartan’s are not afraid of anything.” 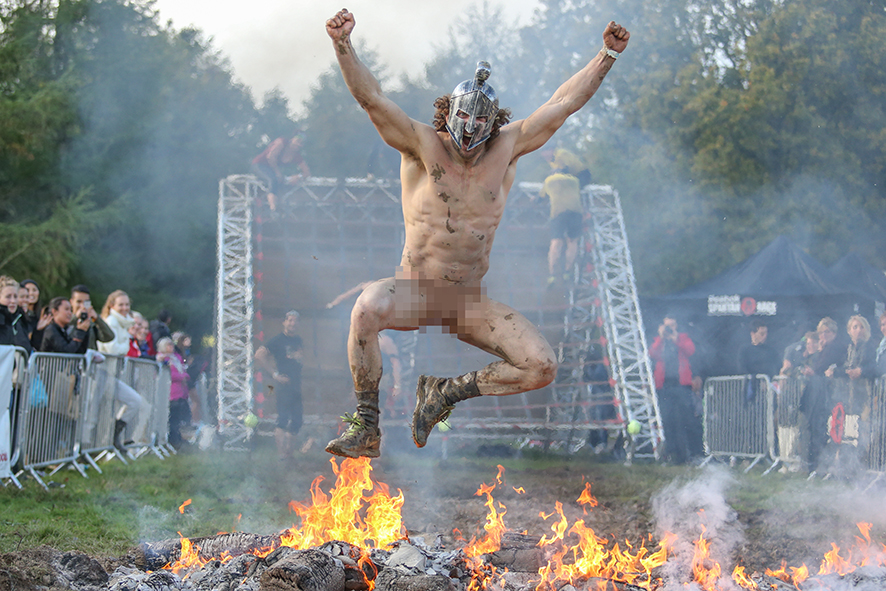 And by the way, we are not changing our font to Comic Sans! Gotcha!