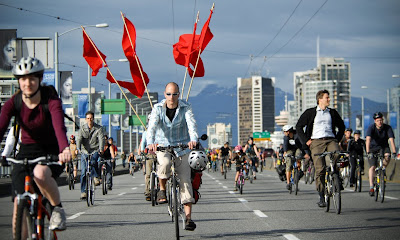 Image: Itzafineday (Yes that is the Mayor to your right, enjoying a nice ride during critical mass)

Yesterday Vancouver city council approved a $25 million bike plan over the next two years. This will result in 55 km’s of new bike ways and improvements to existing bike paths in the City of Vancouver. The ultimate goal of the city is to reach 8% bike ridership, currently we sit somewhere around 4%. This announcement is all part of Vancouver’s ambitious ten year cycling plan and comes on the heels of the Dunsmuir Viaduct tiral and Burrard Bridge bike lanes.
This news is hardly shocking, Mayor Roberston is an avid cyclist, a proponent for green industry and environmentalism and this plan fits in perfectly with his attempt to make Vancouver one of the greenest cities in the world.
The majority of the money will be spent on the following:
Furthermore,  I’d like to see better bike paths along the Broadway corridor (don’t expect to see that until we get the SkyTrain to UBC though) and along Kingsway one day.
I’m sure with more dedicated bike lanes we can get more riders. My only issues with cyclists are that they have to decide, are they going to be on the road or on the sidewalk and I hate it when they ignore stop signs, go through red lights, or use pedestrian cross walks.
All in all, this is a good investment in the city’s transportation plan.
VancityBuzz.com