Grand Opening of Vancouver 2010 Streetcar January 21st, 2010 at 9:30am at West 2nd and Cambie.
Starting today the Vancouverites will be able to hop on the new Vancouver streetcar from the Canada Line station at the Olympic Village. The streetcar will take you to Granville Island (home of the French Quarter during the games) in a mere 3 1/2 minutes (see video below of the streetcar in action). Not too shabby. Furthermore, it will be FREE during the Winter Olympic games.

Bombardier Transportation, in partnership with the City of Vancouver, will provide free streetcar service for Vancouver residents, visitors and athletes during the Vancouver 2010 Olympic and Paralympic Winter Games.

As part of Bombardier’s sponsorship of the streetcar demonstration, it will provide two BOMBARDIER FLEXITY streetcars on loan from Belgium’s Brussels Transport Company. Using the existing Downtown Historic Railway, these 100% low-floor modern streetcars will operate on the 1.8-km of upgraded rail infrastructure. The upgrade is the result of an $8.5 million investment by the City of Vancouver with a $500,000 contribution from the Canada Mortgage and Housing Corporation, the administrator of Granville Island. [source] 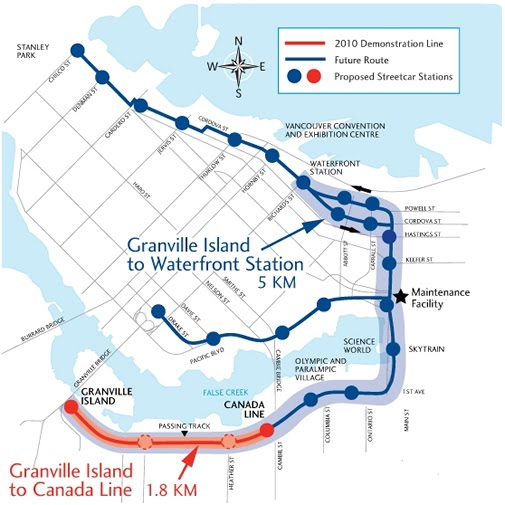